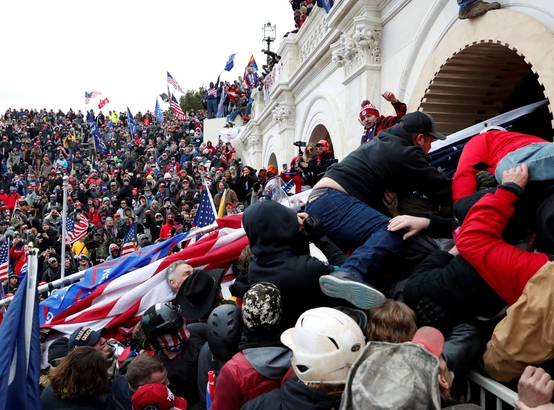 A pro-Trump mob storms into the U.S. Capitol on Jan. 6, 2021. Photo by Shannon Stapleton/Reuters

A year after the Capitol riot, electoral reform is key to American healing

From the day he was elected, Donald Trump was perceived by U.S. Democrats, incredulous at the crass demagogic buffoon’s victory, as a satanic figure that required exorcism.

The first mention of impeachment came 19 minutes after his inauguration. Only days into Trump’s presidency, in Foreign Policy , a former Obama Pentagon legal official wrote a provocative article listing possible ways to remove him. Among them: a potential military coup. Just two weeks into his job as deputy attorney general in 2017, Rod Jay Rosenstein was flirting with the use of the 25th Amendment as a means of removing Trump from office.

Even electoral defeat in 2020 brought no relief to the agony. Trump refused to exit the stage. He had warned his followers for many months that the only way he could lose the election was through electoral fraud, and therefore, he said when he lost, there must have been electoral fraud.

Then came the Jan. 6 riot. I do not call it an “insurrection” because although Trump’s inciteful speech to his flock simply bristled with dog whistles guaranteed to inflame the passions of potential troublemakers, the incident didn’t meet the threshold for insurrection. Insurrections involve leaders with plans. The FBI found “no evidence that the groups had serious plans about what to do if they made it inside.”

I do not call it an 'insurrection'

This was a blow for Trump demonizers. Entrenching the Jan. 6 riot as a historically apocalyptic event that came within a hair of toppling “our democracy” (a trope that has entered the political discourse with frequency in the Trump years, but one that has acquired a kitschy patina since it is adduced compulsively, but almost exclusively by righteous left-wingers) and ushering in a Trump tyranny unequalled in evil since Hitler walked the Earth was their last silver bullet — and it appears to have missed its mark.

For the werewolf lives on. The money pours in for his cause. Worse. According to a Wall Street Journal poll , 81 per cent of Republicans maintain a favourable impression of Trump. A Monmouth University poll, like many other surveys, shows a remarkable 57 per cent of Republicans agree that Trump only lost “due to voter fraud” even though that clearly wasn’t the case.

It’s easy to put Trump’s and his followers’ rabid obsession with an allegedly stolen election down to his massive, often unhinged narcissism. But Hillary Clinton, whatever else one may say of her, is not unhinged, and she, too, has not stopped believing her 2016 election was stolen. And though John Kerry was gracious enough to concede the 2004 election to George W. Bush, he went public in 2005 with his belief that the election was “stolen” from him, alleging there were “questions about the voting machines.” Journalist Mark Crispin Miller edited a compilation of essays by electoral-reform activists, titled, “Loser Take All: Election Fraud and The Subversion of Democracy, 2000 – 2008,” in which the GOP is blamed for a slew of alleged electoral frauds. Trump merely carried on a well-established tradition, only with more kaleidoscopic outrage and conviction.

What is wrong with the U.S. electoral system that so many Americans on both sides of the political divide are convinced that fraud is endemic to state and national elections?

Illumination on this subject can be found in an address last September at a conference sponsored by the Center for Constructive Alternatives on “Critical American Elections,” delivered by John R. Lott, who served in the Trump administration as Senior Advisor for Research and Statistics at the U.S. Department of Justice, with a specialty in voter fraud.

Lott’s talk opened with the thorny topic of photo ID as a voting requirement, strongly favoured by Republicans, strongly criticized by Democrats. Democrats have worked assiduously to associate it with both Republicans’ alleged zeal for (racism-inspired) voter suppression, with Joe Biden even likening a demand for photo ID to the “Jim Crow era,” an allegation Black leaders find insulting .

Objective observers find the Democrats’ obsession with photo ID bizarre. As Lott notes, photo ID is the norm elsewhere. In Canada, photo ID is required to vote. If a voter has none on her person, she may declare her identity in writing, and someone working at the polling station may verify it.

Of the 47 European countries, 46 require government-issued photo IDs for voting purposes. In the United Kingdom, photo ID isn’t universal, but the British parliament is taking standardization under consideration. In Mexico, where election fraud was rampant, strict reforms were instituted. Not only must voters present a photo ID, it must be biometric — and voters’ thumbs are ink-stained to prevent multiple voting.

Republicans believe absentee voting is conducive to fraud. Democrats don’t. In 35 of the 47 European countries — including France and several Scandinavian countries — the practice is not permitted to in-country citizens. Lott notes that in the City of Birmingham, England, in 2004, the six winning candidates in that city’s council races had fraudulently acquired some 40,000 absentee ballots. Which is why England is now one of the 10 European countries that allow absentee voting only if voters first secure their ballot in person with a photo ID. France banned absentee voting altogether when “massive vote fraud was discovered on the island of Corsica.”

Only eight of the European countries allow “proxy voting,” another controversial practice, but in five of them — Belgium, England, Monaco, Poland and Sweden — proxy voting is constrained to those out of the country or holding disability status.

By these standards, the U.S. is inordinately permissive in allowing anyone to simply request an absentee ballot through the mail. The Democrats contend that photo ID and other constraining regulations are undemocratic. But if that were true, it would mean the overwhelming majority of countries in the West are undemocratic, which is absurd. As for the Democrats’ unshakable conviction that strict regulations cause “voter suppression”: according to Lott, in Mexico the rate of voting rose from 59 per cent before, to 68 per cent after, the above-mentioned strict reforms were enacted, because “they had confidence that their votes mattered.” Which makes perfect sense.

Because of COVID, in the 2020 elections, Americans did not even have to request a ballot. They were mailed out to everyone. Will the practice continue? Lott contends, “With absentee voting rules, a country is making itself vulnerable to voter fraud. With mail-in voting, a country is almost begging for voter fraud.”

Lax standards for voting, trending ever more permissive, are at the very least conducive to the rise of conspiracy theories. It is time for a bipartisan commission on electoral integrity, one that can agree on rational, de-weaponized regulatory measures that will restore across-the-board faith in the electoral process. Today’s willed insouciance surrounding the voting process, dressed up as anti-racism by Democrats, does nothing for racial minorities, but it seems to be doing wonders for a self-serving demagogue with delusions of infallibility, and a talent for spinning worthless straw into political gold.