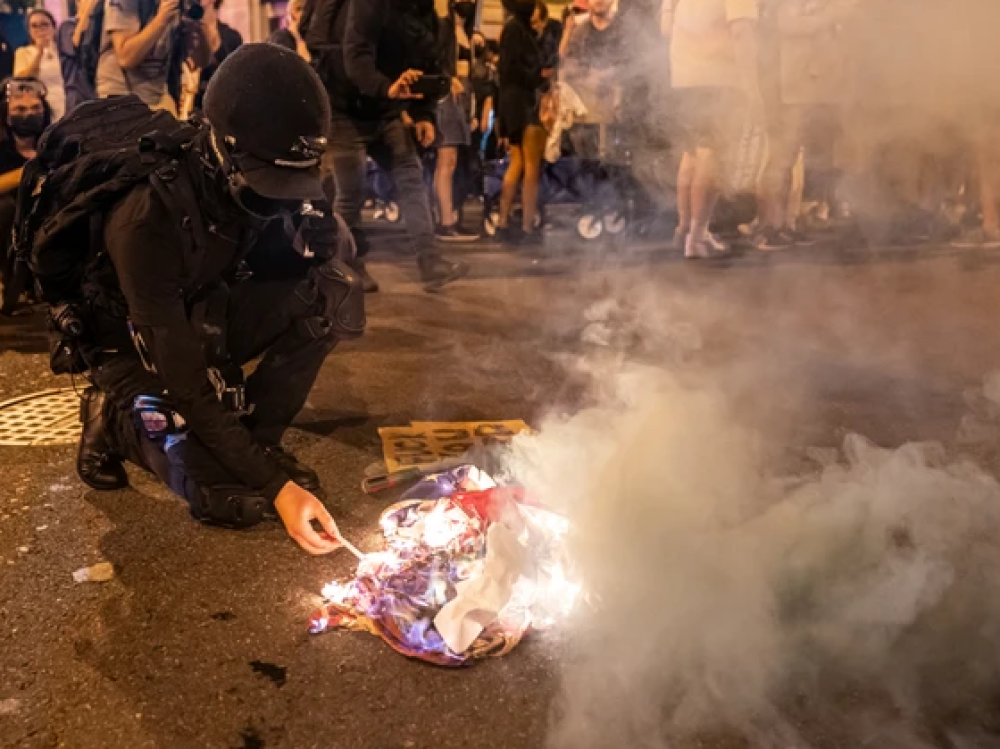 A protester lights a cigarette on a burning American flag, while marching with abortion-rights activists in Washington, D.C., on June 24. PHOTO BY NATHAN HOWARD/GETTY IMAGES

Abortion in the U.S. is now in the hands of voters, where it should be

Roe v. Wade was grounded in an invented “right to privacy.” The revered U.S. Supreme Court Justice Ruth Bader Ginsburg, who was pro-choice to the marrow, warned that, “Doctrinal limbs too swiftly shaped, experience teaches, may prove unstable.” In 1992, in his dissenting opinion in Planned Parenthood v. Casey, Justice Antonin Scalia reflected on “the deep passions this issue arouses,” warning that “by continuing the imposition of a rigid national rule instead of allowing for regional differences, the court merely prolongs and intensifies the anguish.” And so it came to pass. Roe v. Wade was the fruit of an ideological tree, with no history in American common law. It was an abscess in need of a lancing.

American progressives, made over-confident by their ideological capture of most other institutions, have been mugged by a painful reality. In the United States, there are two disparate belief systems regarding reproductive rights. One focuses on the rights of women; the other on unborn children.

Both are passionately espoused. Neither has ceded an inch of moral high ground to the other for 50 years. No legislative compromise has been possible at the federal level. Both sides have to own that impasse.

An estimated 26 states are now poised to tightly constrain or ban abortion. Henceforth, an American woman’s (easy) access to abortion will depend on her geographical location.

National abortion statistics suggest the situation is not quite as calamitous for women seeking an abortion as it seems, however. In Washington, D.C., and New York state — where abortion rates are over 20 per 1,000 women aged 15 to 44, according to 2019 data from the U.S. Centres for Disease Control — nothing will change. In at least 13 red states where abortion will be illegal or highly regulated immediately, abortion rates are already very low (Missouri’s rate is 1.2 per 1,000 women).

The national chasm between pro-lifers and pro-abortionists cannot be overstated. But organized activism comes more instinctively to the left. Enraged pro-abortion activists have taken their anger over the recent Supreme Court decision to the streets.

Pro-life centres across the country were vandalized and firebombed. A group named Jane’s Revenge, dubbed by one commentator as “a sort of pro-choice Ku Klux Klan,” called for a “Night of Rage” — a wink to the Weather Underground’s “Days of Rage” in 1969 — to protest Roe’s vacancy. Pro-abortionists set fires and burned an American flag in Washington, D.C.

Amongst leftist pundits, the Jan. 6, 2021, Capital riot — a singular event — is widely considered the most egregious threat to American democracy in living memory. Yet, equally egregious threats to the lives of Supreme Court justices, including a chilling near-miss against Justice Brett Kavanaugh by a heavily armed young man bent on assassination, are often dismissed by those same pundits.

All Supreme Court justices have now been assigned 24-hour police protection. Recall that in the aftermath of Roe in 1973, no justices needed physical protection from anguished Christians.

This is not an issue that is split along gender lines. Within both political parties, men’s and women’s views are fairly evenly aligned. Pew research indicates that Republican opposition to abortion in “all or most cases” has remained steady over the last 15 years at about 38 per cent. But since 2007, Democrat support for abortion in all or most cases has soared from 63 to 80 per cent.

The rapid rise on the left is linked to abortion’s elevation in woke discourse from a human right to something loftier — a kind of sacrament. English writer Mary Harrington insightfully identifies this abortion-revering worldview as “bio-libertarianism,” the belief that “human freedom necessitates radical unmooring from the givens of our bodies.”

It is no coincidence that the trans rights movement took off at about the same time as abortion. Harrington writes: “The campaigns for medical abortion and transgender surgeries have a great deal in common.… Both causes champion the right of atomized individuals to exert absolute mastery over their bodies. They are not feminist but bio-libertarian.”

Progressives must accept that pro-lifers are not the intellectual cretins they assume them to be. They hold philosophically coherent views, grounded in Judeo-Christian morality, backed up by ineluctable biological facts. Feminists may rail against women’s unfairly assigned role in nature’s reproductive scheme — just as men may rail against wartime conscription, and their assigned, exponentially higher-risk role in protecting women and children — but it cannot be denied that a woman’s womb is unique and gender-specific.

(In case you’re wondering, I believe women should have the right to kill their unborn babies, asking only that they concede they are extinguishing a life in progress rather than “terminating a pregnancy” or other such bafflegab. Along with being legal, I would like to see abortion reasonably regulated.)

Democracy never promised anyone a rose garden. In states where a majority of citizens perceive a conflict of rights, but choose to privilege the rights of the unborn over the rights of bio-libertarian women, elected state legislatures will pass what progressives consider to be bad laws.

Pro-abortionists’ recourse is either to relocate to a more ideologically congenial region, or to offer political support to like-minded representatives in their state. As a mature adult response to a legitimate high court decision they aren’t happy about, both options beat street tantrums and vandalism by a country mile.

Finally, Canadians are fascinated by this story, but some of us could have done without the virtue-signalling on display by Canadian cultural elites. Speaking for them, Prime Minister Justin Trudeau tweeted: “The news coming out of the United States is horrific. My heart goes out to the millions of American women who are now set to lose their legal right to an abortion. I can’t imagine the fear and anger you are feeling right now.”

At least in the U.S., public discussion and debate on abortion are not stifled, and politicians who pay respect to pro-lifers’ views are not treated as beneath contempt, as they are here. This messy, but democratically unfolding drama south of the border is none of Canada’s official business, and nobody in the U.S. asked Trudeau for his opinion. Our sanctimonious prime minister should butt out of America’s internal affairs, and instead attend to the steaming dog’s breakfast of political scandals piling up in his own domestic bowl.