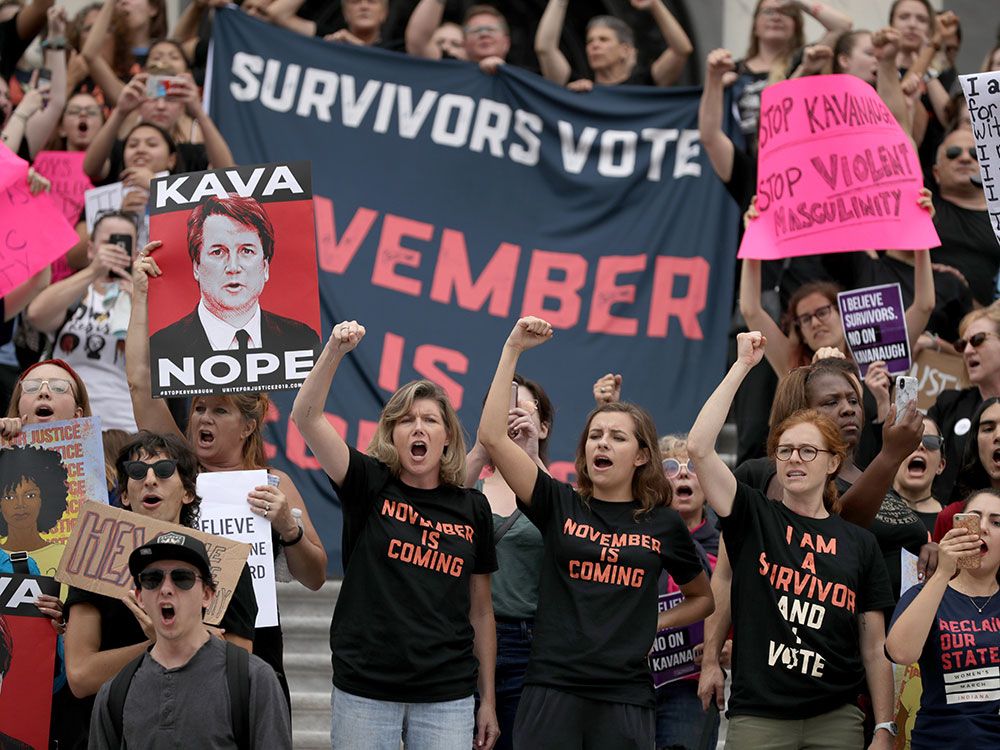 Barbara Kay: A few ‘toxic’ anti-male women are derailing the validity of #MeToo

Hundreds of protesters occupy the centre steps of the East Front of the U.S. Capitol after breaking through barricades to demonstrate against the confirmation of Supreme Court nominee Judge Brett Kavanaugh on Oct. 6, 2018, in Washington, D.C.

According to a survey in the latest Economist magazine, the effect of the #MeToo movement has been to elevate Americans’ skepticism over sympathy for victims. Among other findings, the survey notes that between November 2017 and September 2018, while the perception that false allegations of sexual assault are a greater problem than unreported or unpunished sexual assault remains a minority, it nevertheless rose among both men and women in all categories surveyed — even among Hillary Clinton supporters. The poll, conducted by YouGov, found that “18 per cent of Americans now think that false accusations of sexual assault are a bigger problem than attacks that go unreported or unpunished, compared with 13 per cent in November last year,” the Economist reports.

The Kavanaugh-Ford Senate hearings cannot be the sole cause for these elevated numbers, but likely contributed to them. It is one thing to see full justice done to abusers like Bill Cosby with a longtime, well-supported pattern of predatory behaviour; it’s quite another to see a deeply vetted Supreme Court appointee come perilously close to professional disaster and a lifetime proscription against coaching girls’ basketball on the basis of one woman’s uncorroborated 36-year-old memory.

Another contributing factor to the cooling of sympathy for accusers must surely be the licence given by the #MeToo movement to air venomous screeds against all men in the mainstream media.

In June, The Washington Post published a diatribe against men, with the provocative title, “Why can’t we hate men?” by women’s studies professor Suzanna Danuta Walters. In it she catalogues the crimes of “toxic masculinity”: sexual violence, terrorism, mansplaining, unequal wages, etc. For Walters, all women are vulnerable, all men are a risk to them.

Last week, the Post facilitated more toxic misandry. In another op-ed blast, “Thanks for not raping us, all you ‘good men,’ But it’s not enough,” retired history professor Victoria Bissell Brown recounts highlights from the demonizing tirade she delivered to one man, meant to represent all men, as a means of venting her frustration with women’s ongoing victimhood.

Trouble is, the vessel for Brown’s load of verbal spewing is her husband of 50 years — “one of the good men,” who “(doesn’t) hit women or rape women or in any way abuse women,” who has “applauded and funded feminism for a half-century” — who she sets up as the prisoner in the dock for a gender show trial.

Brown tells us she yelled for 30 minutes at this poor schlemazel, who “sat, hunched and hurt,” while “I announced that I hate all men and wish all men were dead.” Being one of the “good men,” he couldn’t yell back at her that she was being unfair, abusive and cruel. To show what a good feminist he was, he had to suck it up, and by her account, he did. Even after she says there is no hope for him because “You can listen all you want, but that will not create one iota of change.”

This sort of publicized mistreatment is going to make a lot of “good men” angry — and a lot of women, too, including normal feminists. Does this woman think her betrayal will leave no scars? She says she is a grandmother. That means she has a son or daughter. Did she not consider the consequences of this juvenile public tantrum for her husband’s standing as a father and grandfather? What did she hope to accomplish here?

Unhinged haters like Brown are helping to foment a backlash against #MeToo. Good men don’t yell back at women; they don’t hit them; they don’t argue with them; they don’t write rebuttal pieces and submit them to The Washington Post. What they are doing is slowly backing away from them. And in meaningful ways.

I have a youngish friend in the financial sector, a senior executive in a large company. In our conversations, I have noted his growing apprehension about #MeToo excesses. He tells me he’s too paranoid now to get into elevators with women if there are no witnesses around, or even have one-on-one meetings with women, because he worries he “could be taken down by any female employee with a frivolous claim of sexual harassment that could ruin my family and my reputation.” For a long time he wanted to hire more women to increase their representation in his field. Now he’s not so sure.

In her article, “Why can’t we hate men?” Suzanna Danuta Walters writes, “The world has little place for feminist anger.” Another false allegation that, along with mere anger, does nothing to improve gender relations.