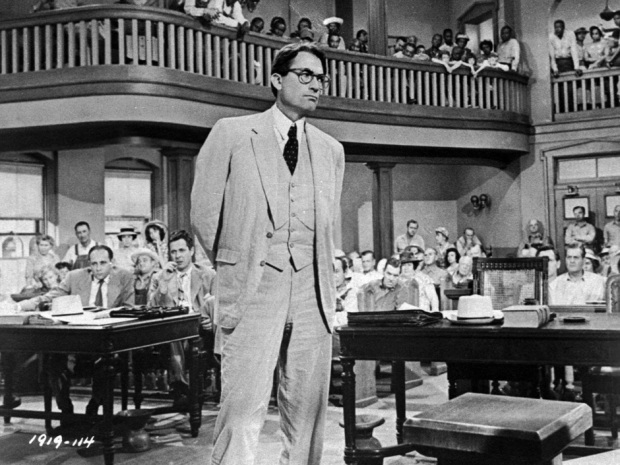 Barbara Kay: Atticus Finch would have had his pick of men falsely accused of rape and denied due process today

Harper Lee is preparing a sequel to "To Kill a Mockingbird"

The novel To Kill a Mockingbird, by Harper Lee, much in the news with the release of Lee’s practice-run novel for Mockingbird, Go Set a Watchman, is America’s favourite book, its extraordinary popularity undiminished more than 50 years after it was published.

Strangely, though taught in high schools everywhere, it comes with no “trigger warnings” for female students, whose imaginations nowadays are thought to be too fragile to accommodate even fictional allusions to rape without recourse to a fainting couch.

And yet not only is the novel very much about rape — or rather a false allegation of rape — it contains a scene in which the heroic protagonist, lawyer Atticus Finch, challenges the alleged victim in court with the kind of uncompromising interrogation that many feminists call “the second rape” of rape victims.

Harper Lee’s focus was justice, not the feelings of those being cross-examined in court. A harsh interrogation of the accused was necessary to establish defendant Tom Robinson’s objective innocence. But he was foredoomed by his society’s entrenched racist beliefs about black men. Cultural belief systems generally trump the law. And a society’s moral compass rarely triumphs over the greater magnetic pull of a moral panic.

(--image--) Today almost any (white) man accused of rape on a university campus is presumed guilty because campuses are imbued by moral panic over “rape culture.” A latter-day Atticus Finch would have his pick of men falsely accused of rape and denied due process. Or who had been targeted for punishment for the crimes of other men because — well, apparently because they’re men too.

As a case in point, you may recall that in 2014, when two players from the University of Ottawa hockey team were charged with one count of sexual assault each while partying during a trip to Thunder Bay, the whole team was suspended and the rest of their season cancelled. Twenty-four team members, who had nothing to do with the incriminating sexual incidents, are seeking a combined $6 million for damage to their reputations.

The U of Ottawa sought to have the lawsuit dismissed, but an Ontario court has just found that the suit’s claims that the school was negligent are admissible for trial, and also found the decision to suspend the hockey team was outside the university’s broad discretion to manage academic affairs.

The proposed suit would have charged U of Ottawa president Allan Rock with malfeasance in public office, but the court ruled the charge was not sustainable. Rock is lucky to dodge this bullet, for the suspension decision is down to him in the end, and it was an unjust and irrational response to the known facts surrounding the sexual incidents.

The administration at the U of Ottawa is not unique, or even unusual, in North America. Increasingly, universities have tasked themselves with the prevention of all sexual harm to women rather than harm reduction, and in striving to meet this utopian standard have become indifferent to the rights of men.

In February’s Harvard Law Review Forum, for example, Professor Janet Halley wrote up the case of a young man at an Oregon liberal-arts college, who was subjected to a month-long investigation into putative sexual misconduct in any of his relationships, involving deep invasion of his and his friends’ privacy. The result was an order to stay away from a female student (a ruling that impacted his housing, campus job and educational opportunities). The investigation itself was initiated — not, as you might think, because the female student had alleged misbehaviour on his part — but because the young man reminded the complainant of a man who had once raped her thousands of miles away. Furthermore, although he was found to be completely innocent of any sexual misconduct whatsoever, the stay-away order remained in place.

Surreal situations like this can only happen in an ideology-dominated environment that has completely lost its fair-play compass.

Comparisons can be odious, and in no way am I making the case that white men caught up in the toils of rape-culture hysteria are comparable as victims to black men in America’s past who were lynched, set on fire, castrated and, only if lucky, sent to prison for life for sexual crimes they were merely rumoured to have committed.

But that doesn’t mean the bigotry of misandry, which “only” causes psychological anguish, social isolation, ruin of reputations (for life, via the Internet), poisoned academic or athletic prospects, whole families’ humiliation and endangered or wrecked careers should be tolerated.

A latter-day Atticus Finch would have his pick of men falsely accused of rape and denied due process.

Which is why I hope the U of Ottawa loses the hockey-team lawsuit, and has to pay out millions in damages. What is the use of assigning Mockingbird as a cautionary tale if we do not apply its universal message to the identity bigotry of our own time and place?