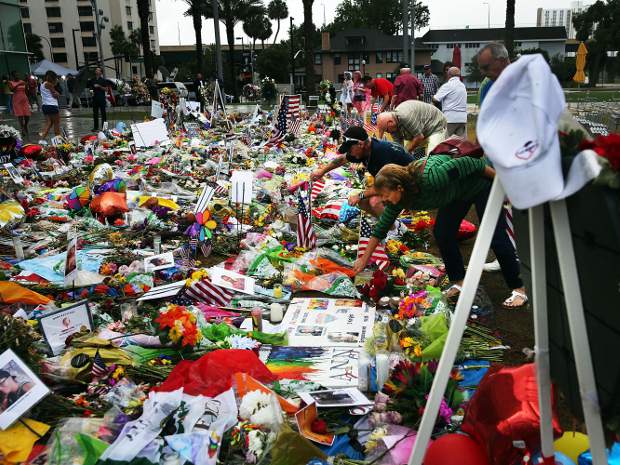 Barbara Kay: Could Islamism be to blame for the Orlando attack? Perish the thought!

People visit a memorial down the road from the Pulse nightclub in Orlando on Sunday.

Last week, I was invited into a talk-radio forum on the Orlando massacre. It provided a good example for listeners of the competing interpretive narratives the mass killing has generated.

My interlocutor positioned the massacre as a product of America’s gun culture, one in a chain of mass gun-related calamities like Columbine and Sandy Hook, coupled with a disordered mind and broad-based homophobia, a feature, she noted, of belief systems other than Islam.

Though a serious problem, America’s gun culture is a sidebar here, I countered. Norway, France, Britain and Canada all have strict gun laws, but have all experienced gun massacres. Massacrists bent on their perceived mission will take what’s to hand — firearms are efficient, but if unavailable or incompatible with their vision, other weapons suffice. Ted Kaczynski (Unabomber) and the Tsarnaev brothers (Boston Marathon massacre) chose bombs.

I asked what discussion we would be having if Omar Mateen had used a bomb to vent his fury against gays, as he well might have if he had not been able to purchase his AR-15. It was conceded that we would then be discussing motive, rather than opportunity.

In Orlando the motive was, specifically, homophobia of a longstanding and culturally rooted virulence. Homophobia in the West is officially and almost universally deplored, even if individual gays do still suffer violence from individual homophobes (crimes that are harshly punished). But Mateen was the product of a culture in which homosexuality is universally deplored and retribution both officially and popularly endorsed — by extreme shaming at best, death at worst.

Progressives are fervently devoted both to gay rights and to multiculturalism. So they are faced with a conundrum. If they blame Islamic culture for promoting homophobia of a kind that seems to sanction actual violence, they will be perceived by fellow progressives (and by themselves) as Islamophobic. So much easier, then, to blame easy access to guns, with gun control as the solution.

Not only with regard to homophobia. The same liberal impulse to choose multicultural pieties — all cultures are equally worthy and valid; violence perpetrated in the name of specific cultural values is equally likely to be perpetrated by anyone from any culture — is at work when we confront honour-motivated violence against girls and women.

In the post-Orlando discourse, I recognize exactly the same tropes that tumbled forth in the wake of Aqsa Parvez’s 2007 honour-motivated torture-killing. In that case, a generalized “domestic violence” was posited as the root cause, and Aqsa’s murder merely an extreme example of the abuse of women that is a universal phenomenon.

Except, of course, that it wasn’t. Nor were the 2009 murders of the four Shafia women examples of “domestic violence.” Their deaths were extreme examples of the honour-obsessed culture flourishing in all Islam-dominant societies (and in other parts of the world, as well). Indeed, the motivation behind Canada’s 23-plus acknowledged honour killings of girls and women — acknowledged, that is, by their murdering fathers and brothers, often abetted by their mothers — was revulsion for the alleged shaming brought upon their families by the victims’ Westernized behaviours. Innocent by our cultural standards, threatening and destabilizing by theirs.

Orlando also evoked Canada’s 1989 Montreal Massacre for me. Marc Lépine (real name Gamil Gharbi), the son of an Algerian wife-beater, who methodically picked off 14 women students at the Montreal Polytechnique, even used a similar firearm to Mateen’s, a Ruger Mini-14, a semi-automatic hunting rifle of the same calibre as the AR-15 (and still non-restricted in Canada).

The reaction to the massacre was similar to what we are seeing today. Any discussion of Lépine’s cultural legacy was assiduously sidelined. His profound misogyny was immediately subsumed by ideologues into a general narrative of “domestic violence” and Lépine became a symbol of the allegedly latent urge to control women in all men.

That all-female massacre — a virtually freak incident, with neither prequel nor sequel, not only in Canadian but human history (even in war, generally it is men and boys who are killed, while women are raped) — was the work of a disordered mind, but even disordered minds seek a justifying mental conduit, which entrenched cultural assumptions provide, as in Mateen’s case. Lépine felt shamed, his manhood diminished by women engineering students appropriating his idea of male privilege.

The Montreal Massacre fomented a misandric domestic-violence industry via the White Ribbon campaign, which entrenched the myth of inherent male misogyny by universalizing Lépine’s aberration. And now LGBT vigils, as is clear from a recent invitation to one in Ottawa, which denounces “any form of Islamophobic, xenophobic, or racist actions” (what Islamophobic actions?), are already Lépine-izing Mateen.

For progressives to continue their impossible multicultural/gender equality juggling act, they must constrain the violence blame game to the far right, heterosexual men and guns: Neo-Nazis? Fine. Universal patriarchy? Sure. The National Rifle Association? You bet! Islam-dominated culture? I can’t heaaaaarrr you. It’s intellectually … shaming.