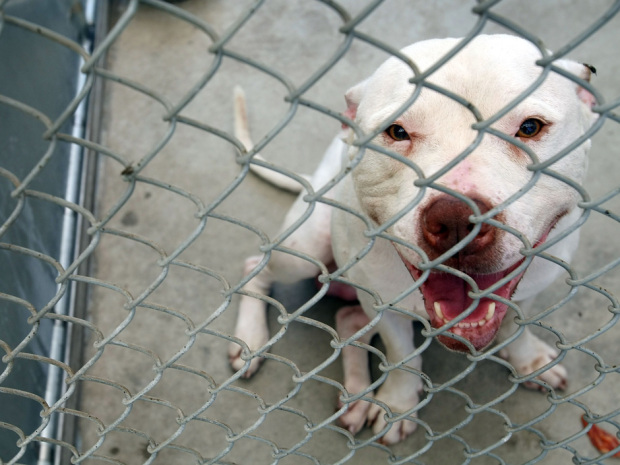 Barbara Kay: Do you want to adopt a dog? Reconsider the pit bull

A file photo of a pit bull. A California man was sentenced to 15 years to life in prison on Friday after his pit bulls mauled a woman to death in 2013.

In June of 1997, seven-year old Sharon Reynolds of Kingston, Ontario was savaged to death by a pit bull living in her home. Her mother Louise was erroneously charged and convicted of her murder. Louise’s misfortune was to have the infamous Dr. Charles Randal Smith, head pediatric forensic pathologist at Toronto’s Hospital for Sick Children, witnessing against her at trial. Smith insisted that the eighty (!) grievous wounds on Sharon’s body were caused by stabbing scissorpoints. Louise spent three and a half years in prison before her name was cleared.

Smith’s forensic errors on a number of cases were later brought to light in a scandalous saga of malpractice run amok that ruined the lives of many innocent people. But to be fair even to the unconscionable Dr. Smith, dogbite-related deaths are fairly rare in Canada. In 1997 even severe maulings were infrequent. And to be even fairer, unless one is familiar with the breed-particular attack style of fighting dogs – random, sudden, unpredictable, relentless and grotesquely mutilating – it is conceivable that even a competent and ethical forensic pathologist might have balked at assigning such mayhem to the work of a mere canine. For no other breed of dog, with the exception of the Rottweiler (but far less frequently), has an inherent taste for bloodletting sufficient to inflict the kind of damage Sharon suffered.

Pit bulls have been assigned their own special “Day” on Oct 24. By two groups with radically different messages.

So on Oct 24 we have National Pit Bull Awareness Day, which seeks to promote a positive image of pit bulls through appeals to their victim status (they certainly are more abused than any other breed of dog, because they attract a lot of sickos who get off on owning a naturally aggressive and threatening dog), and urge adoption of them from shelters. Also on Oct 24, we have Pit Bull Victim Awareness Day (PBVAD), which draws attention to the individuals behind the numbers who have paid the ultimate price for their own or their parents’ innocent naiveté. Victim numbers escalate every year with the climbing percentage of pit bulls in the canine population (once negligible, now at 5%).

My regular readers, who know that this rather esoteric subject is something of an obsession with me, will already have figured out I’m supporting PBVAD. You can easily find their Facebook page, but – trigger warning – don’t click on “photos” if you are the least bit squeamish. I don’t normally approve of shocking images to make a point, but in this battle for hearts and minds, where the money and the organization and the politicized institutions are on the side of pit bull image-laundering, I think it is a legitimate strategy. It is the only way to combat the false narrative of the benign and misunderstood pit bull. The Internet is awash in pit bull-friendly sites featuring pit bulls in tutus, pit bulls with flower wreaths around their heads, pit bulls curled up asleep with infants draped over them, adorable pit bull puppies, and of course endless heartrending streams of sad-eyed abused, starved, chained, scarred and burned pit bulls. Nowhere on any of these sites do you see the damning statistics or the names and faces of the human victims.

If you are yourself, or know someone who is considering rescuing a dog from a shelter, please proceed with extreme caution. Because pit bulls occupy about two thirds of the space in shelters, staff are very eager to “push” them for adoption. Consider carefully before you succumb to the smooth talk about what wonderful pets they make. Because:

In the 14 years from 1993 to the first Pit Bull Awareness Day in 2007, 1,159 pit bulls and pit bull mixes attacked 508 children and 380 adults in U.S. and Canadian incidents, in which 103 people died and 644 people were disfigured. (A “disfigurement,” by the way, signifies an attack that is both horribly painful, terrifying and traumatically life-changing.) That represents a fivefold increase in fatalities, a tenfold increase in attacks and a more than twentyfold increase in disfigurements over 1993. Since 2007, there have been 2,793 pit bulls and close pit bull mix attacks on 1,067 children and 1,189 adults, of whom 208 died and 1,891 were disfigured. That is, in the last nine years the rates have tripled the previous huge increases.

If staff are evasive, back away. Please, at the very least, do not rescue a pit bull if you have young children or other pets in the home

Please, if you go to a shelter and they give you their shpiel on pit bull wonderfulness, bear in mind that these people are not disinterested. And know they will sometimes feed you myths: that, for example, fighting dogs that have already shown aggression can be “rehabilitated.” No dog that has been aggressive once can ever be completely trustworthy afterward (ask yourself why the dog is there in the first place; it is likely because it has been aggressive to a household pet or human). Make sure you are getting the dog’s real history. If staff are evasive, back away. Please, at the very least, do not rescue a pit bull if you have young children or other pets in the home, as children are easy and attractive targets, and pit bulls are responsible the overwhelming majority of attacks on other domestic animals.

There are over 200 dog breeds that have never once been implicated in a mauling or human death, even though many of them have also been abused. Ask yourself: Why should I take a chance on a pit bull when I can have peace of mind with another dog?

Finally, I would like to take this opportunity to thank my editors at the National Post and Full Comment for their patience and indulgence in allowing me to vent my frustration on this subject over the last decade and more. There are other publications I know of that become so uncomfortable with the organized blowback they receive from the “pit nutters,” as we call them, that they won’t allow their writers to label pit bulls as inherently dangerous. One young colleague I know in B.C. who has been telling her readers the facts about pit bulls just lost her column for “editorializing.” I am grateful for the freedom I have had on this subject in these pages.