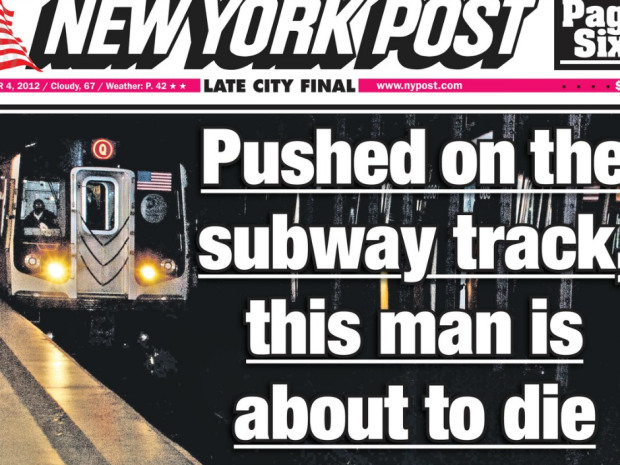 I hate to drive because I have bad parking karma, so I use public transportation regularly. I also have a phobia about being pushed onto the subway tracks, so while waiting for trains, I always stand as far from the tracks as possible, which is to say up against the wall, where nobody can get behind me. I only move forward when the train is stopped and the doors open.

It actually makes me a little queasy to see people standing close to the edge of the platform as they wait for the train. Subways seem to attract a lot of weirdos, and one’s vulnerability in such a situation is absolute. In a nano-second one goes from banal normalcy to terror and – without near-miraculous luck – certain death. How many horrible stories does one need to read to get the message?

One such story surfaced in New York Dec 5, when 58-year old K-Suck Han was crushed to death by a subway train after being pushed onto the tracks, allegedly by a panhandler after “a brief altercation.” The incident might not have attracted international attention if it had only been reported in words. But a freelance photojournalist captured Han in his last seconds of life, futilely attempting to climb to the safety of the platform, with the train, unable to stop in time, bearing down on him. The photograph was published on the front page of the New York Post, sensationally captioned: “Pushed on the subway track, this man is about to die.”

The New York Post is a tabloid, and not known for its subtlety. But these words and image provoked outrage in readers, many of whom expressed indignation that the photographer’s impulse to snap the photo had not been trumped by the impulse to help the man. I don’t agree. A photojournalist’s instinct is to record, not alter events. In the photo we do not see the man’s face. If his face had been turned to the camera, I still wouldn’t have faulted the photographer for taking the snap, but I would have faulted the  Post editor for running it.

I can only judge another person by what I think I would have done. I confess that if I had been a witness to this dreadful scenario, I am morally certain I would have frozen, instinctively self-protective. What if I grabbed him and his frantic grip on me pulled me onto the rails? Besides, the whole incident, from push to death probably flew by in mere seconds. I do not have the reflexes of a James Bond, nor I am sure do most other people.

If that incident had happened in Quebec’s metro system, though, the photojournalist might have been brought up on charges according to Quebec’s 2010 “Good Samaritan” (civil) law. Only Quebec of all the provinces has such a law. The law has two wings, one good and the other not so good.

On the one hand, it protects people who try to help others in a crisis from legal redress if their interventions prove fruitless or even lead to negative outcomes. That’s good because it means a doctor who lends his expertise in a restaurant, say, to someone in distress, can’t be sued if the victim dies. It encourages good samaritanism.

On the other hand, the law also obliges citizens to act in a crisis as a “bon père de famille,” broadly defined as a reasonably prudent person. Failure to do so can lead to prosecution of the non-intervenor. There were a dozen people standing on the platform when Mr. Han was pushed over. The photojournalist was singled out for censure because he not only didn’t help Mr Han, but took another action instead. The others simply did nothing. According to Quebec law, they might all be liable to legal redress for their inaction.

Good Samaritan laws are unenforceable and unfairly demanding. In an ideal world we would all act with empathy and decisive action in a crisis. In the real world, there are innumerable reasons why most of us don’t, especially the risk – or perceived risk – of harm to oneself. Laws can’t enforce hypothetical or ideal behaviour. If the Good Samaritan law had been applied in the case of Mr. Han’s tragedy, the result next time would be a stampede for the exits. The state would have no heroes and the police would have no witnesses.