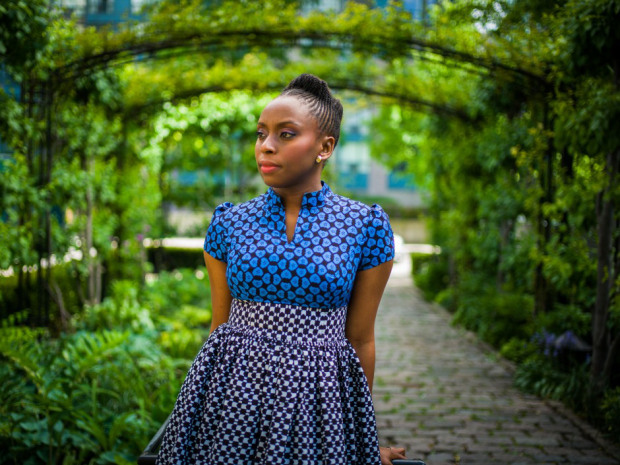 In this latest ambitious novel of sweeping social-realism breadth and illuminating psychological depth, a now-seasoned and authoritative Adichie seamlessly braids character and plot with themes of race, class and national cultures to produce an aesthetic masterpiece.

Race is the great cultural subject of our time. The literature of former colonies and mother countries is awash in reflection — angry, guilty, grieving, optimistic, pessimistic — on blacks and whites’ shared past, often ugly, never less than troubled. I have read novels by American, British and African writers that deal with race tensions in America, Britain and Africa. But Chimamanda Ngozi Adichie’s Americanah is something new, a literary panopticon: a novel that simultaneously expands the reader’s understanding, not only about relations between blacks and whites on all three continents, but also about relations amongst blacks on all three continents.

Adichie’s first novel, Purple Hibiscus, was longlisted for the Booker prize. Her second, Half a Yellow Sun, won the prestigious Orange Prize. In this latest ambitious novel of sweeping social-realism breadth and illuminating psychological depth, a now-seasoned and authoritative Adichie seamlessly braids character and plot with themes of race, class and national cultures to produce an aesthetic masterpiece.

Americanah is the word Nigerians apply to one amongst them who has lived in America and then come home. The novel traces the adventures of Ifemelu and Obinze, high-achieving teenage schoolmates, who bond romantically over a dedication to “honesty” and intellectual reciprocity in a cultural climate where gendered conformity is more valued than critical thinking. Both are from aspirational homes (his of higher status), in which excellent English, academic degrees conferred by American and English universities and residency abroad are romanticized social capital.

When an opportunity to attend an obscure Philadelphia college presents itself, Ifemelu seizes it with mixed eagerness and trepidation; later, Obinze makes his way to London. Both endure difficult episodes of deracination and grueling penury. Ifemelu, after a traumatic sexual incident that shames her into an abrupt rupture with Obinze, finally finds her feet, both job-wise (nanny to a wealthy family) and socially (rich, influential white boyfriend).

Ifemelu starts a cheeky but insightful blog about race in America, which finds a growing audience and even sponsorship. Modestly famous, her sojourn in America takes wing, capped by a fellowship to Princeton. In London, Obinze is unlucky; prospects for dignified work and elusive legal status dim, and he is ultimately “removed” from England on the cusp of a desperation sham marriage. Following his ignominious return to Lagos, though, he finds unexpectedly easy success and wealth as a land developer, and — having given up on Ifemelu — marriage to a beautiful and loving, but intellectually limited wife, whose dutiful conventionality bores him.

Much of the appeal of Americanah lies in the originality and precision of Adichie’s insights into cultural differences around race. Language is an important trope. At first, in Philadelphia, Ifemelu emulates an American accent. One day a telemarketer, apprised of her provenance, tells her, “You sound American” and she feels “a burgeoning shame” for having adopted “a way of being that was not hers”; soon after, symbolically, she reverts to her authentic accent.

Adichie is equally adept at conveying states of mind and cultural nuances through discussions about hair. Many black women, perhaps even more than white women, are obsessed with hair. “Relaxing,” cornrows, Chinese weaves, afros big and small: black hair is a political and cultural signifier. Getting her own hair “relaxed” evokes a feeling of “something organic dying” and a “sense of loss.” Impulsively adopting a small but authentic afro, Ifemelu finds self-respect: She “fell in love with her hair.” (When a white woman begs to touch it, she is happy to oblige, but her second boyfriend — black, academic — is furious. He’s politically correct; she’s non-ideological, spontaneous).

Ifemilu’s Nigerian circle always has scolded Ifemelu for her judgmentalism. But in fact, Ifemelu, like her creator, is simply a close, objective observer, who winkles out the foibles, double standards, self-righteousness and chauvinism of every group she finds herself amongst. But even negative observations are sheathed in affection and understanding for her subjects that take the sting out of her scrutiny. She is tough on conservatives who don’t “get” systemic racism, which she illustrates in numerous gemlike vignettes (“we don’t do curly eyebrows” says a covertly racist salon manager), but also on liberal whites who feel they must constantly reassure blacks of their race-blindness (proving their intense race-consciousness), and tough as well on the self-righteousness and utopianism of both white and black progressive academics.

At first, Ifemelu feels more connection with international students than American blacks — that is, with others who have not been historically oppressed. But solidarity with American blacks gels over Barack Obama, whose election makes her feel that “nothing was more beautiful to her than America.”

After many years, however, although Ifemelu is grateful to have an American passport, since it “shielded her from choicelessness,” she reflects that if she is to have children, she wants them to grow up in Nigeria where, though nowadays observed more in the breach in England itself, the old British virtues of politeness, respect for elders and educational humility still apply. “I don’t want a child who feeds on praise and expects a star for effort and talks back to adults in the name of self-expression.”

Ifemelu’s homecoming provides some of the most fascinating social commentary in the book. To their friends who stayed home, Americanahs are “the sanctified, the returners, back home with an extra gleaming layer.” Now Ifemelu only feels comfortable socially with others who have lived abroad — they meet at the “Nigerpolitan Club” — with whom she can commiserate over Nigeria’s lack of American amenities like reliable air conditioning, vegetarian restaurants, fast Internet and NPR.

Ifemelu and Obinze rediscover each other and find they share the same impatience with their own culture: “Such a transactional city,” “Nigerians can be so obsequious,” “We have confidence but no dignity.” But home is where they belong. One day Ifemelu hears from her former white boyfriend, who asks if she is still blogging about race. She replies, “No, just about life. Race doesn’t really work here. I feel like I got off the plane in Lagos and stopped being black.” A luxury no American black is ever likely to possess.