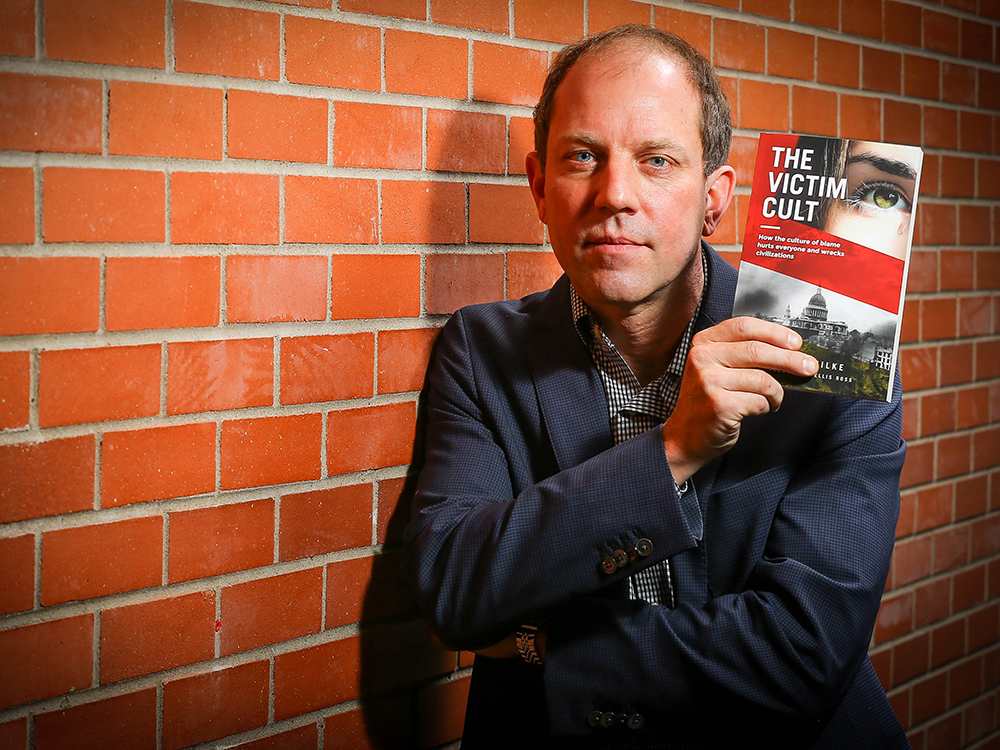 Barbara Kay: Exploring why some societies thrive after trauma while others suffer

Public policy analyst and author Mark Milke poses with his new book, The Victim Cult: How the Culture of Blame Hurts Everyone and Wrecks Civilizations

We all know when we have been victimized as individuals, and so do witnesses. The pain may or may not heal; the injustice may or may not be redressed. It gets murkier when groups claim permanent victimhood arising from pain and injustice inflicted in the past on dead victims by dead victimizers.

An obsession with past victimhood can prevent a focus on the present at the expense of the future. A collective sense of victimhood combined with the tripwires of race, religion and ethnicity can be translated into a justification for action, with devastating effects. That is the driving thesis behind The Victim Cult: How the Culture of Blame Hurts Everyone and Wrecks Civilizations, a new book by seasoned public policy analyst, columnist and author Mark Milke, whose work has been published in think-tanks in Canada, the U.S. and Europe.

This excellent book was eight years in the writing and it shows. But not because it is pedantic; on the contrary, Milke wears his scholarship lightly. His crisp, polished prose belies the exhaustive research that permits him to speak out so boldly and broadly on what is a sensitive, often culturally weaponized subject.

The book begins on the now-familiar terrain of university campuses, where the theory of “intersectionality” has created a kind of Oppression Olympics, with various minority groups vying for their slice of the social-capital pie that victim status confers.

As university students are all relatively privileged, bias-based aggression is rare and “microaggressions” must suffice. In one case Milke recounts, an elderly professor’s insistence on graduate students using proper grammar ended in a petition to have him removed, not to mention a charge of “criminal battery” for briefly resting a hand on his accuser’s arm.

The book treats a spectrum of victimhood, from “mild” through “moderate” to “murderous.” Microaggression victimhood on campus earns a “mild” ranking, At the other end of the spectrum are tribal or national victim cults in which grievance narratives fuel extreme ideologies, justifying acts of terrorism or even sustained campaigns of exterminations that “wreck civilizations,” and Milke devotes whole chapters to a number of them.

In between are “moderate” group victimhoods that are the trickiest to deal with. Into this category Milke assigns slavery in the U.S. and residential schools in Canada. In these cases the actual suffering and actual injustices, though monstrous,  have passed. They have been systemically acknowledged. Deep remorse for their respective nations’ historical wrongs has been expressed at the highest cultural and political levels. Compensation in money and equity opportunities have been lavishly dispersed. But the sense of collective victimhood lingers, and all present disparities in outcomes continue to be ascribed by descendants to the original sins.

In the 19th and early 20th centuries, Germans blamed France, Western liberalism and the Jews for all of their problems. Hitler brought his own sense of victimhood to fertile cultural terrain, resulting in history’s most brutal genocide. Even though the Hutus were numerically dominant after Rwandan independence in 1961, they felt threatened by the more successful Tutsis. A “perfect storm of blame, fear, civil war and opportunity” erupted, ending with a million victims. Yasser Arafat, “the Peter Pan of international politics,” could never say yes to peace, because he was so deeply invested in the Palestinian victim cult he couldn’t bear to abandon his “refusenik” persona.

Many groups have been victimized, but not all groups succumb to the temptation to define themselves by their suffering. Milke doesn’t accept that colonialism is to blame, or any other explanation that puts the entire onus on an external cause. He points to the example of Japanese-Americans and Canadians who suffered internment, as well as the Chinese, who suffered great discrimination here, but did not pass resentment on to their children; to Palestinians who recoiled from Arafat’s pathological revanchism and created lives for themselves elsewhere; and to Jews, whose continual resilience and refusal to be defined by their suffering has proven crucial to their success. What groups that have eschewed victimhood have in common, Milke observes, is a culture that embraces education, family stability and a spirit of entrepreneurism.

What groups that have eschewed victimhood have in common, Milke observes, is a culture that embraces education, family stability and a spirit of entrepreneurism

Milke goes all the way back to Plato and then to Rousseau to explain the drivers of grievance culture. Plato inspired a belief in man’s “perfectability.” Rousseau romanticized pre-modern cultures as more natural and authentic than our own. A belief in perfectability — utopianism — led to the evils of Marxism. Enchantment with the “noble savage” encouraged a pernicious fascination with race purity and hatred of the Other. Add in a new third influence, “the suicidal self-loathing of a mainly Western class of intellectuals and academics (and their followers), who breathe in assumptions of Western guilt,” and the cult of victimhood follows, as night the day.

Indigenous victimhood occupies a generous, myth-busting portion of the book. Here Milke boldly goes, with evidence, where few others dare to venture. Indigenous poverty on reserves is not caused by colonialism, he argues, but by geographic distance from job sources. Natives living near metropolitan areas, such as the majority of the Métis, for example, are close to income parity with non-natives. He is skeptical of the utility of formal apologies (“it is not clear that government regrets add much to the overall stock of human compassion”) and strongly critical of, amongst others, the 2019 MMIWG report: “The authors missed the mark because they were possessed by the notion that the strongest cultures are those uncontaminated by outsiders — a false and dangerous assumption.”

Finally, Milke suggests prescriptive measures for countering victim culture: Don’t speak of cultures as though they were flesh-and-blood creatures; the word “genocide” applies only to people. Limit state reparations to suffering that is “tight, straightforward and provable.”

And listen to what Ellis Ross, former elected chief councillor of Haisla First Nation, has to say in the book’s foreword. Ross’s parents went to residential schools, but “my own personal problems were … a result of my own decision-making.” Ross concludes, “There is plenty of blame to go around, but I prefer finding solutions.”