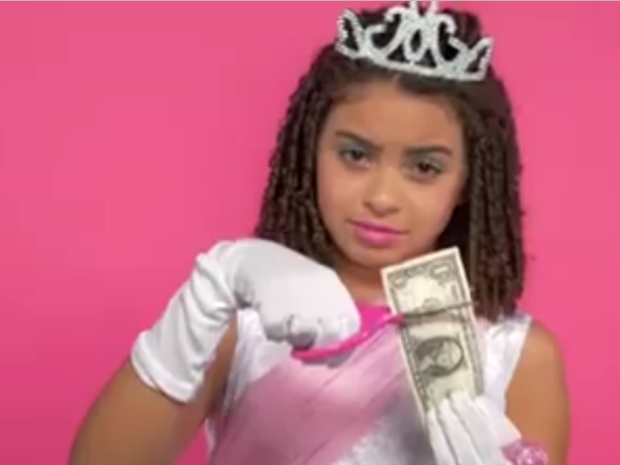 A video intended to "empower" young girls should have women backing slowly away from feminists who have lost the plot.

It’s not often that my daughter pleads with me to write something about some or other cultural phenomenon. But this week she sent me a Youtube video, and told me I had to write about it.

I watched it. I have five granddaughters, ranging in age from ten to two. So yes, I knew I would have to write about it, But it’s one of the toughest assignments I’ve ever given myself. Because my head was exploding with rage while I watched, so it was hard to type. But yes, I have to write about it, and everyone who can write should write about it, and everyone who can’t write should do something else: I don’t know, maybe open the window, stick their heads out and scream, “I’m mad as hell and I’m not going to take this anymore.”

First watch it. If you don’t see anything wrong with it, stop reading because I am now going to insult you. To be okay with this video, you’d have to be okay with children serving as adults’ toys, for whatever purpose adults want, in this case to embody the need for gender justice through the creative juxtaposition of childhood “innocence” with adult “knowing” through the “irony” of “adult” entertainment. To do that, you have to take young children who shouldn’t be thinking or expressing certain kinds of adult thoughts, and then get them to act as if it was their custom and normal to do so. Wink wink wink wink wink.

So what’s so objectionable? Where to begin? There’s adult women thinking it’s cool to have young girls – we’re talking nine or ten here – rapping like snarling, alienated “gangstas” with every third word out of their mouth f***, f***ing, f***ed-up or mother***er to show how “down” they are with badass ‘tude. There’s white women thinking it’s awesomely creative to have white girls (with a token Asian and a token black) puttin’ it out there like hip-hop “hos.” There’s feminists thinking it’s cool to have children posing and pouting like jaded hook-up queens, only – omg, we’re so clever and ironic – dressed in the kind of princess outfits that are all the rage for *pre-sexual* children.Little girls talking like sluts, so inviting the kind of attention one normally gives sluts (not that there is supposed to be anything wrong with that, but there is when it’s children). In the parlance, wouldn’t you say that’s kind of “rapey”?

This video is supposed to be “empowering” for girls (“I’m pretty f***ing powerful”). The theme – not the subtlest – is that “society” tells us that the word f*** is dirty, but guess what? What’s really dirty is that women aren’t treated well in our society. For example, “pay inequality” is “more f***ed up than the word f***” because women get 23% less for the “same f***ing work” than men. And since one in five women will be sexually assaulted, “start teaching boys not to f***ing rape.” And boys who like to dress as girls are mocked, so “F*** that sexist s***.”

The words “crude,” “coarse” and “indecent” do not begin to convey the negative effect of this assault on the sensible viewer’s eyes and ears. But the word “falsehoods” is a good beginning. Not a single statement of alleged fact in the video is true. Deconstruction of the pay inequality myth and the one-in-five sexual assault canard have been handily dealt with many times by credible analysts and with irrefutable data.

And nobody is teaching their sons to rape, so there is no need to “start” teaching them not to. And by the way, nobody is making little girls yearn to own and wear princess dresses or enjoy being pretty. They just do, and that’s a real fact. Which is, you know, kind of ironic.

This video is not only a prime example of child abuse – any parent who lets their nine year old child watch this crap should seriously interrogate his or her parental judgment and maturity, and the parents who allowed their daughters to take part in it should have their heads examined – its tone simply exudes misandry.

Please do not even think of writing to me and accusing me of a lack of a sense of humour, or explain to me the nature of dramatic irony. Literature is my field. I know all about irony, and when it works, also when it is appropriate and when it is not. The only irony I can see in “Potty-Mouthed Princesses Drop the F-Bomb” is that it’s going to put off a whole lot of people who were sympathetic to feminism when they started watching, but by the end of it will realize that feminism has jumped the shark, and become a horripilating caricature of the serious reform movement it once was. They’ll back away slowly, run to hug their daughters, and murmur, “Don’t worry honey, I won’t let those motherfu – er, those women get hold of you.”