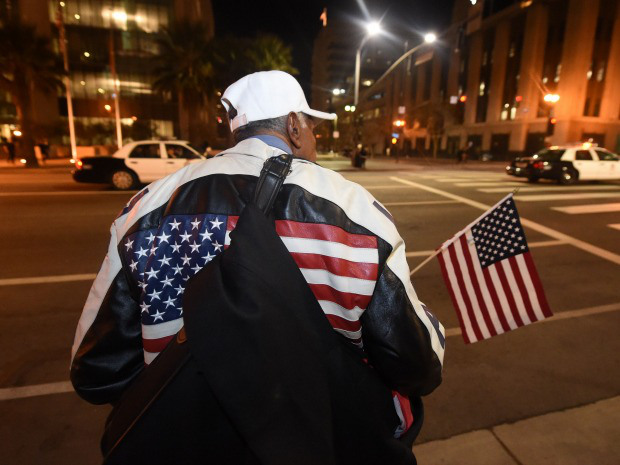 Barbara Kay: Ferguson is the exception, not the norm in U.S. race relations

Most Americans feel race relations are better than are usually portrayed.

Is a racism-free America a utopian dream? The recent dystopian mayhem of Ferguson, Missouri would seem to support such a pessimistic view of race relations. At times like these, with the focus on white power and black frustration and anger in a particular place, we fail to recognize the bigger picture of nation-wide social progress.

Whether due to the unseasonably cool, snowy weather or the next day’s U.S. Thanksgiving holiday, a drastically reduced number of protesters hit the streets Wednesday night to decry the police shooting of black teenager Michael Brown.

Demonstrators stood at a fence outside the city’s police headquarters and loudly heckled National Guard troops, then marched several blocks north, blocking traffic temporarily at some points, but stayed peaceful.

It was nothing like the arson, looting and vandalism that reigned here Monday night, or Tuesday night’s more restrained but still-tense events, when a police car was smashed with rocks, set on fire and tipped over.

Our difficulty in seeing past extraordinary flash points like Ferguson is encouraged by ideologues, who depend on a theme of entrenched, ineradicable racism to justify their “progressive” activism. They will stop at nothing to convince us that racism is a kind of original sin embedded in our white genes. The term “white privilege,” frequently bandied about these days, is a locution pointing to an unproven but accepted “fact” in progressive circles: that since whiteness itself confers social power in certain situations, as for example in Ferguson – 70% black, where police, mostly white, tend to hassle blacks on spec but not whites – it is considered a form of racism in itself.

A recent PBS series called The Whiteness Project enhances that view. In it white people are interviewed and discuss their biases and fears. The project, by filmmaker Whitney Dow, “hopes to bring everyday white Americans, especially those who would not normally engage in a project about race, into the racial discussion – to help them understand the active role their race plays in every facet of their lives… and to help white Americans learn to own their whiteness.”

The 21 subjects interviewed are all white citizens of Buffalo, N.Y. No names or personal information is given. Some show their annoyance with the intense race-consciousness we are all exposed to, with remarks like, “you can’t even talk about fried chicken and Kool-Aid without wondering if somebody’s gonna get offended. It’s always like walking on eggshells, isn’t it? I don’t know, you just don’t know where the line is.” (This is assumed to be a racist remark; for the record, I think it is merely a realistic assessment of the manic political correctness around race today.)

And yet, when you look at actual statistics culled from reliable sources (these below were amassed by senior writer Matt Labash of the Weekly Standard magazine for an article, “Among the Palefaces,” in its Nov. 3 edition, highly recommended reading), quite a different picture emerges from what the Ferguson scenario might lead us to believe:

· A Pew survey finds a majority of white respondents saying that affirmative action for minorities is a good thing, though they worry about the fairness of the programs. Amongst whites, 43% felt the programs were unfair. But so did 35% of blacks! Go figure;

· An MTV survey discovers that 70% of white millennials “did not grow up in families that talked much about race.” That sounds incriminating, but “84% of them said their family taught them that everyone should be treated the same, no matter what their race” and “[A] belief in equality has become this generation’s ‘first commandment’ – true across all races;”

· A Public Religion Research Institute Study finds that 75% of white Americans say their social networks are entirely white. But 65% of blacks say the same – and that is harder to do considering they are only 12% of the population.

· A New York Times survey (taken during the Ferguson shooting tensions) found that 75% of white Americans say they come into contact with a “few” or “no” blacks on a regular basis. When asked how comfortable they felt talking race with someone of another race, 81% of the 75% said they felt either very or somewhat comfortable;

· Even after Ferguson, only 13% of blacks said they saw the police as their enemies.

That last statistic seems incredible – or rather, it seems incredible if you only heed the liberal media, which is to say most media. In reality, though, black-white relations are not static; they are improving in general, and would improve all the faster if the term “white privilege” were retired from public discourse.