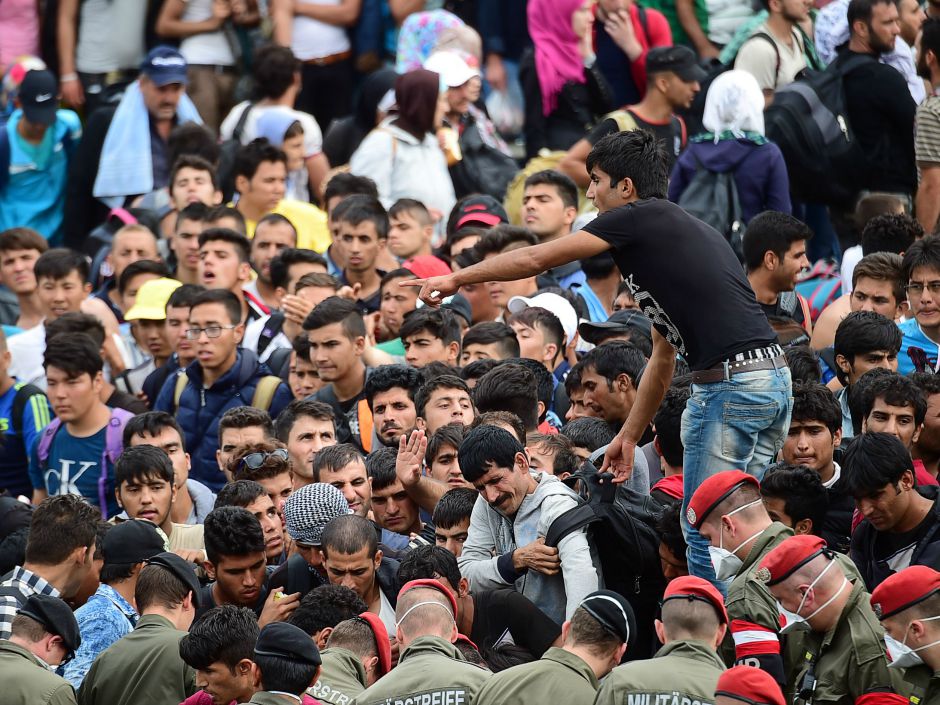 Refugees crowd at the Hungarian-Austrian border in Szentgotthard, Hungary, as thousands of migrants wait for their departure to Germany on September 19, 2015.

Bad things that are tips of bad icebergs shouldn’t happen to good people. But if they must, it’s as well they happen to people with influence to command respectful attention.

Gordon Wasserman (since 2011 Baron Wasserman) grew up in Montreal, won a Rhodes Scholarship to Oxford University, and joined the U.K. Home Office in 1967. He is presently a Conservative member of the House of Lords and Government Advisor on Policing and Criminal Justice. The “bad thing” happened to his grandson, “Oscar,” not his real name.

It’s a disturbing story, fraught with multiple ironies. Here, according to Michalski’s TV account and my telephone conversation with Gemma Michalski, is what happened.

It is a disturbing story, fraught with multiple ironies

Oscar, 13, was enrolled in a public school the Michalskis had chosen for its vaunted commitment to diversity and anti-racism. The school population is about 80 per cent Muslims — mostly of Turkish, some of other Arab provenance — and 15 per cent ethnic Germans, with a sprinkling of Kurdish and African children.

Oscar’s first four days went swimmingly. On the fifth day, in Ethics class, speaking about the world’s great faiths, the teacher asked if the students were familiar with any houses of worship. The answers came: “church,” “mosque,” “church,” mosque.” Oscar responded, “synagogue.” The teacher asked if he was Jewish; he said yes, and here his troubles began.

A Muslim boy Oscar had befriended promptly told him — not in anger but as a matter of obvious fact — they could no longer play together because “Muslims and Jews cannot be friends” and “Jews are murderers.” From then on, slurs against Jews and Israel from otherwise perfectly nice boys and girls from working-class Muslim families were tossed off at him as a matter of course.

His parents requested immediate intervention from school authorities, but beyond sympathetic platitudes, the administration was curiously unresponsive. Oscar then became the butt of general bullying, which escalated to physical attacks. Still no action was taken. Gemma Michalski told me that after one serious beating by a Palestinian boy, the school’s social worker told her she was “pushy” for urging an action plan to deal with the problem and to “let it be.” Her suggestion was that since Oscar’s “presence was provocative” to his attacker, Oscar should try to avoid him. A tipping point arrived with “a mock execution” in which an older student pretended to kill Oscar with a realistic-looking gun and headlocked the boy to the point of unconsciousness.

Oscar left the school. Nobody was suspended or punished. As Michalski dryly notes in his understated manner to the interviewer, it is “regrettable that it was the victim that had to disappear from the other school while the others continued to enjoy its advantages.” Oscar now attends a private international school, where he is happy.

Oscar’s experience was clearly not unique, as Michalski discovered when the story became known. From correspondence and people who approached them in public places, “we learned there were many many such incidents” happening “everywhere in Germany,” but the common denominator was a fear of going public with them, Gemma told me. In his family’s own case, Michalski said a few parents and a few of Oscar’s German classmates offered support, but they felt “powerless in the face of this anti-Semitic bullying.”

It is honourable of the Michalskis and Lord Wasserman to forego the privacy they would naturally prefer in the circumstances, exploiting their status to force public discussion on the issue. It must be forced, because Merkel’s government and Germany’s liberal elites, including much of the media, are desperate to prove that integration of Muslim immigrants and migrants will proceed apace with time.

Oscar’s experience shows that superficial integration with ethnic Germans is possible. But Jews are a sticking point when there are some Muslims coming to Germany from countries where for generations the government policy and the cultural fabric have been anti-Semitic. The word irony seems inadequate to convey the excruciatingly paradoxical outcome of Germany’s redemptive national impulse gone horribly awry: anti-Semitism; persecution; Holocaust; national guilt; expiation through generous immigration policies; imported anti-Semitism; persecution …

The Michalskis were told “that it wasn’t easy to suspend these children.” But so what if it is difficult? What is the use of boasting about anti-racism policies if, as Gemma Michalski put it to me, “the school won’t defend their values, which are our values”? If there is one country in the world outside of Israel where Jews have a right to feel safe, it’s Germany. The Michalskis did. Now not quite so much.