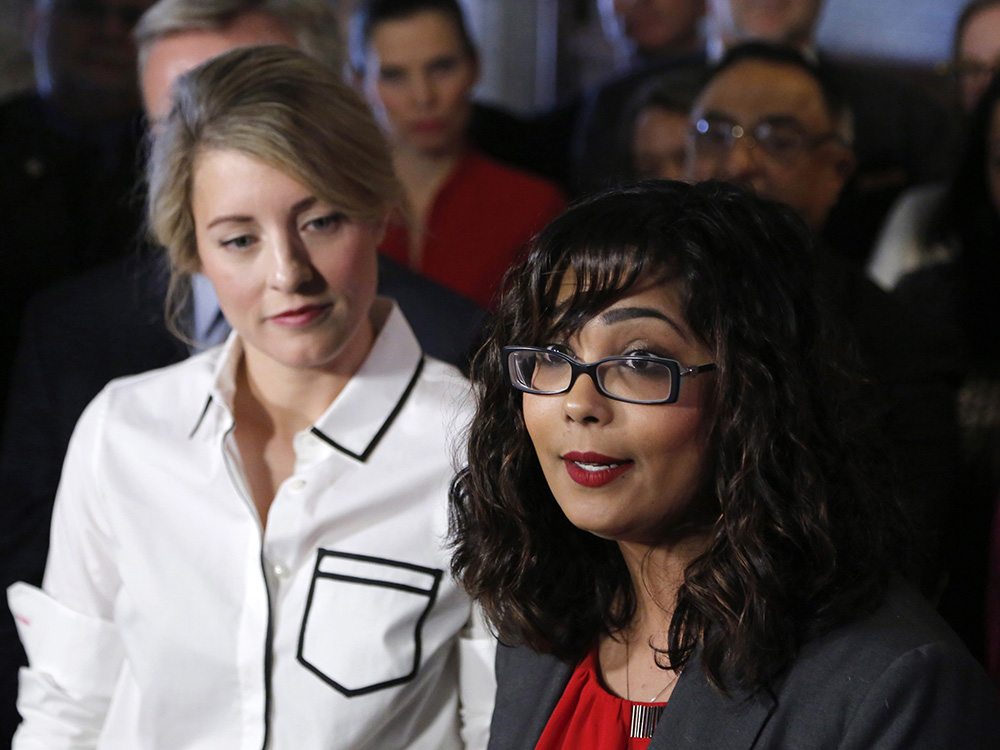 Barbara Kay: Getting to the heart of what M-103 was always all about

Liberal MP Iqra Khalid makes an announcement about M-103 on Parliament Hill while Minister of Canadian Heritage Melanie Joly looks on, on Feb. 15, 2017.

On Feb. 1, the National Heritage Committee submitted the report called for by the passage of M-103 last winter.

M-103 surprised its backers when it turned out not to be the slam dunk they thought it would be, given that its founding predecessor document, Petition e-411, which called for a “whole-of-government approach to reducing or eliminating systemic racism and religion, including Islamophobia,” quietly slid as if along greased wheels to acceptance.

Thus, the words “including Islamophobia” having passed under the public radar before M-103 was introduced, M-103 backers were caught off guard when the polemical sky lit up with full-throated debate around what the hell “Islamophobia” actually meant. If it was bigotry against Muslims, why wasn’t “anti-Muslim” good enough?

The Conservatives tried to have the motion amended with that substitution, but M-103’s supporters — notably among them the unelected Muslim advocacy group, National Council of Canadian Muslims, formerly CAIR.Can, and MP Iqra Khalid — with the full support of the Liberals, dug in their heels on “Islamophobia,” without ever clearly denying that it could also mean “criticism of Islam.”

And so, although the motion passed in March 2017, it passed amidst controversy and alarm amongst a great number of Canadians who worried we were being hoodwinked into a plan to curtail freedom of speech where one specific religion was concerned.

From this organic constituency there arose a group called Canadian Citizens for Charter Rights and Freedoms, coalescing around the clear and coherent analysis of M-103 by Royal Canadian Air Force Major (ret’d) Russ Cooper, a decorated CF-18 combat pilot, who amongst other achievements, took on national responsibilities in the field of post-9/11 civil aviation security. The focused and task-oriented Cooper followed the M-103 hearings in meticulously documented detail, publishing regular reportage of witness testimony.

Now Cooper has written a detailed and compelling analysis of the Heritage Committee report. Most of the report’s 30 recommendations, Cooper concludes, should be subjected to rigorous scrutiny by politicians, for many, if implemented, contain the seeds for further public dissension and potential freedom-of-speech curtailments warned against in the first go-around.

One of M-103’s objectives was, in its words, to counter a “climate of fear and hate.” But the report’s own statistics do not bear out the existence of any pervasive “climate” of broad-based hate and fear. In 2015, 1.9 million crimes were reported. Of them, 1,300 were deemed hate crimes, or one-tenth of one per cent of all crimes. A “dissenting report” by the Committee’s Conservative members noted that from 2009 to 2016 — with a Canadian population rise of three million people in that period — hate crimes actually decreased “nearly 13 per cent on a per capita basis.”

The report notes a 61-per-cent increase of hate crimes against Muslims from 2014 to 2015. The actual numbers went from 99 to 159. All hate crimes must be taken seriously, but statistically, given Canada’s Muslim population of over one million, these statistics are not culturally significant. Rebecca Kong, chief of the Policing Services Program at the Canadian Centre for Justice Statistics, stated the number of hate crimes was so small they did not support the assertion in Petition e-411 that there was a “notable rise of anti-Muslim sentiment in Canada.” (By the numbers, anti-Semitism ranks as Canada’s most common form of hate crime, and it is rising in frequency, yet even it is not so statistically significant to warrant a “whole-of government” approach to combat).

In fact, no hard evidence was adduced in the report to prove that anti-Muslim bias is systemic in Canada. The Quebec mosque massacre was mentioned as evidence of “white supremacism and radicalism in Canada,” although the mosque killer has not yet been linked to any organized political movement nor charged with an act of terrorism.

Indeed, among those testifying at the hearings, the only witnesses who brought actual evidence to bear on the assertion that religious bias was “systemic” throughout Canadian institutions were Christians. Representatives from Trinity Western University, the Christian Medical and Dental Society of Canada and the Evangelical Fellowship of Canada all offered concrete examples of the state forcing, or attempting to force, counter-conscience beliefs and behaviours, most notably the practice of euthanasia. I am not being facetious when I suggest that Christians have a more evidence-based right than Muslims to feel they are victims of systemic institutional bias.

Which is why I view with extreme concern the still-undefined term Islamophobia popping up in the report’s 30th recommendation for a National Day of Action to combat it. Clearly that is the glittering prize for M-103’s backers; the rest is obfuscatory preamble. If an official Day of Action against Islamophobia is granted, even fair-minded and objectively warranted criticism of parts of the Islamic faith, and perhaps even Islamism itself, would be increasingly legally fraught. I believe that is the point of the exercise.