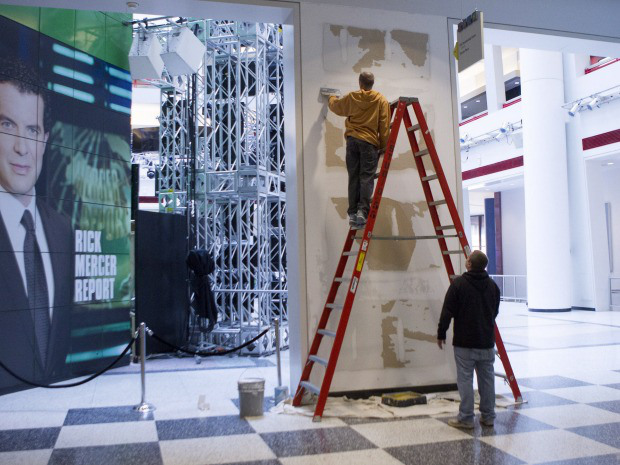 It’s like a volcano. The rumbles go on for weeks, months, even years. But when the volcano finally erupts, the lava flow is surprisingly swift and can mean sudden death for anyone in its path.

For a 27-year-old journalism-school graduate, it was the perfect job, helping build and produce a brand-new, national show on CBC Radio with Jian Ghomeshi, a reportedly “demanding,” but respected host.

So when the young producer heard lurid stories back in 2007 about Mr. Ghomeshi’s private life — including accounts even then of his hitting and choking dates — she wrote it off as merely kinky behaviour and pushed ahead.

The woman did assist in the birth of one of the network’s most popular and acclaimed programs but, she recounted in a lengthy interview Thursday, the next three years on Q were hellish.

That’s where we are now in the Ghomeshi affair. Watching Jian Ghomeshi try to outrun the lava, composed of the alleged victims’  narratives, the media, the CBC and law enforcement itself. Without the help of his crisis management and PR firms, who have jumped into their helicopters and left him to fend for himself. I will now retire this metaphor, which has more than served its purpose.

In my Wednesday column, I implied that I was inclined to believe Ghomeshi was guilty of the allegations against him. I am far more so today. It seems to me virtually impossible for a  conspiracy to have produced so many disparate individuals with essentially the same story. And with two highly credible women having gone on the record with their claims, a picture is emerging of a man in need of therapy for intimacy issues (if he doesn’t actually end up in prison, entirely conceivable if one now-emboldened woman surrounded by supportive witnesses does in fact lay charges against him). I am not saying he is mentally ill, or that he is not responsible for his actions. Even if he is in thrall to some psychological disorder, it does not mean he doesn’t know right from wrong.

Something is puzzling me. I keep reading the words “mob” and “lynching” from commentators who are appalled at people like me, rushing to judgment without Ghomeshi having received due process, and without the women involved filing charges against him. Why haven’t they gone to the police, everyone keeps asking. Obviously because each woman thought she was alone in her experience, and that she could not prove it, and that in some cases, she herself was not blameless in having opened the door to her experience by ignoring warning signs, and in other cases because her career might be derailed, and all things considered, it was best to move on with her life. I understand these women’s reluctance to pursue a charge. Life isn’t always about perfect justice. It’s about cost/benefit analysis as well – the discomfort of the public glare on dubious sexual preferences in some cases, for example – and so, balancing their options in practical terms, the women did what was best for themselves. I’d have done the same.

An irony strikes me. Why am I not reading the words “rape culture” in this story? Over the past few years, we have been immersed in moral panic over the alleged horrors awaiting female coeds on campus. In story after story, we have seen – how shall I say? – oh yes, “mob lynchings” of young men accused of rape purely on the word of a young woman who in many cases was so drunk at the time of the encounter, she can’t even remember what actually transpired. These women were not urged to go to the police (because everyone knows that in real life, their cases wouldn’t meet the standard for evidence). But in large part the media has no compunction in labeling such accused young men as rapists, even though they did not get anything like due process. Very few pundits express indignation on their behalf. If the particulars of the Jian Ghomeshi story had unfolded on a university campus, and instead of a media star, he was a hockey player, can you imagine any Canadian observer seriously decrying his so-called mob lynching? Scores of campus men are being lynched every day across North America, and most pundits are calling it justice, because how else can we end the scourge of “rape culture”?

Here’s another irony. If Jian Ghomeshi were in a relationship – living with a woman, I mean – and he committed any of the abuses Ghomeshi is accused of, and she called the police, he’d be arrested in a heartbeat. He could explain until the cows came home that he and his partner were into kinky sex, and that physical violence (controlled, with a “safe” word) were part of the deal, but unless his partner confirmed it (and even then, the police might think she was covering for him out of fear), he’d be toast. Because that is the default policy with regard to intimate partner violence. I have heard from literally hundreds of men who have been falsely accused of violence by partners, especially during custody battles, and not one of them got due process, and nobody cared that they didn’t.

Do you blame me if, trying to decode our culture’s attitude toward sexual behaviour, what’s moral, what’s immoral, who’s guilty, who’s not, I am feeling slightly confused?