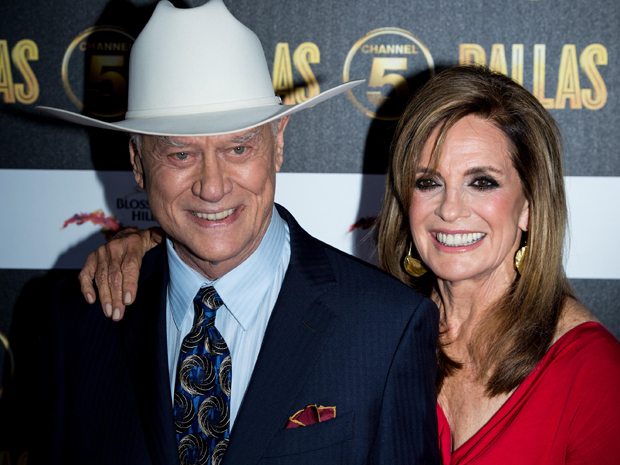 Barbara Kay: How Larry Hagman and Dallas won our hearts — and the Cold War

The Shah of Iran had just died. Russia was hosting the Olympics. Linda Ronstadt was starring in The Pirates of Penzance. Sony had just come out with a cute new little gadget called a “Walkman.”

And what was the question on everyone’s lips? Who shot J.R.?

Nobody of my own or my children’s generation needs any further explanation, but for any quizzical whippersnappers under the age of 40, the question refers of course to the central character of the insanely popular TV series, Dallas, (1978-1991): smarmily villainous oil baron J.R. Ewing, who was shot by an unseen (would-be) assassin in a cliffhanger ending to the show’s 1980 season.

The question of who had the greatest motive to kill J.R. (he was so universally despised that speculation went so far as to moot his own saintly mom as a possibility) became a cultural meme that went viral long before the Internet and the word “meme” were social norms.

Larry Hagman, who played J.R., died 10 days ago, spurring innumerable fond reminiscences of Dallas and its amazing international popularity. And by international I don’t just mean North America and Europe. In 1991, a Bedouin tribe delayed its annual trek across the Sahara so the tribe’s elders wouldn’t miss Dallas’ concluding episode. My friend in Israel wrote me that, “all social life in Israel came to a halt around Dallas,” recalling hurrying home to see it, and hearing, through every open window, the familiar opening musical theme, “DAH da DAH, da DAH da da DAH da, DAH da DAH da da DAAAAAH.…”

Into every life a little schlock must fall, even into the lives of those pretentious types who usually never stoop to anything less elite on TV than Brideshead Revisited, Pride and Prejudice and Jewel in the Crown. And so Dallas fell into mine. From its debut, I was hooked, lined and sinkered.

Worse, I suckered my kids, then 10 and eight, into watching with me. Probably the CAS would consider that child abuse today.

In my defence, I have to say that although J.R. was a two-timing, conniving sleazebag, the series maintained certain decency standards. No profanity ever crossed anyone’s lips. And we might see J.R. ushering his latest adulterous partner into a hotel room with a Cheshire-cat grin, but the next shot would be the two of them lolling contentedly in bed, the sheets pulled up to their chins. Quaint by today’s standards.

Then cut to Southfork and J.R.’s beautiful, long-suffering and exquisitely dressed wife, Sue Ellen, who knew everything. I loved this sulky, ever-conflicted woman. I liked the way she glided over to the Southfork living room drinks bar every evening, as though propelled there by her shoulder pads, so she could sink elegantly into the sofa and sip herself into a pre-prandial stupor in order to endure J.R.’s taunting banter at dinner under the pitying gaze of the rest of the live-in family: patriarch Jock and matriarch Miss Ellie, goody-goody Bobby and his goody-goody wife Pam.

My daughter tells me that Dallas was her initiation into cultural irony, her first realization that you could love a soap opera you knew was intrinsically ridiculous and beneath what should be your aesthetic standards.

And yet, mock it and ourselves as we did, not everyone took it in the same ironic spirit.

In the 1980s, for example, Dallas was the last show from the West that Romania’s communist tyrant Nicolae Ceausescu permitted to air. Apparently, he thought Romanians would be turned off by the association of capitalism with J.R.’s despicable character. Instead, Hagman became a revered symbol of individual enterprise to oppressed Romanians. From their avid devotion to the show, capitalism took on a “cool” image.

Hagman credited Dallas with helping to end the Ceausescu regime in 1989. Not so outlandish, considering that afterward the Romanians built a replica of Southfork — “Southforkscu” — in the show’s honour, which Hagman declared on a visit to be identical to the Dallas set.

My current TV fetish is The Good Wife, in which the protagonist, Alicia Florrick, formerly a compliant political wife, reasserts her individuality and independence (following revelations of her husband’s infidelities), by resuming a legal career.

How far we have come from the 1970s. If only Sue Ellen had provided herself with an education before marrying J.R., she and her shoulder pads might have led a vastly different life.

But then the world would have been deprived of Dallas as we knew it. Sorry Sue-Ellen, no education for you.