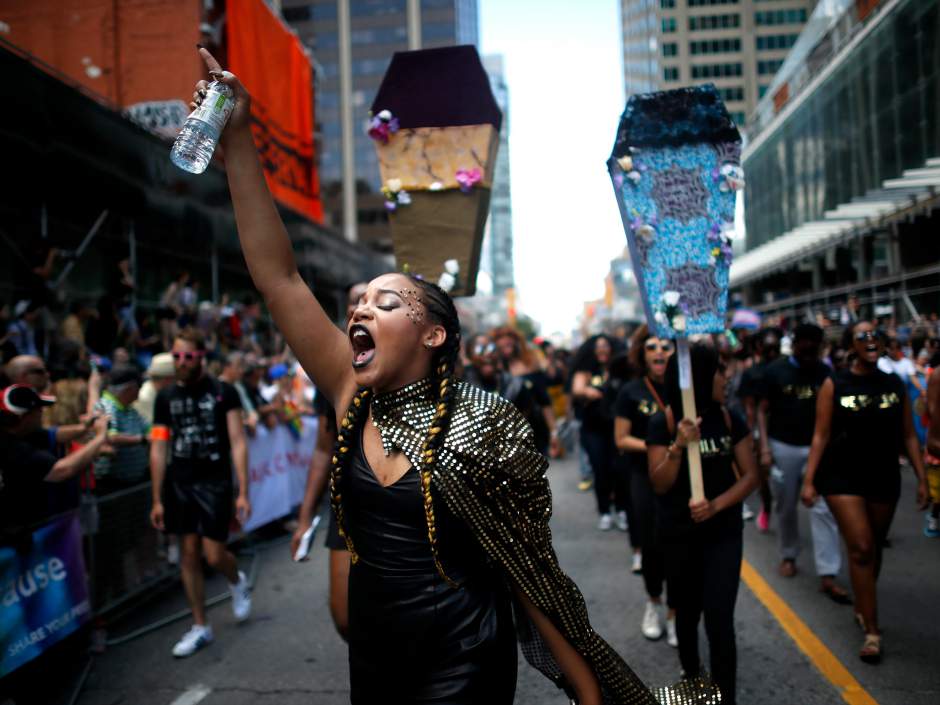 Barbara Kay: In BLM’s view to be white is to be racist and to be black is to be a victim

Don’t you just hate it when you invite the new folks next door to dinner so they can meet the neighbours, and then they arrive an hour late, after which they trash your cooking skills and demand better wine?

Pride Toronto knows that feeling. Members of the Toronto chapter of Black Lives Matter (BLM), “honoured guests” at Sunday’s Pride parade, staged an unscheduled sit-in, halting the parade for 30 minutes until Pride Toronto’s executive director signed off on their demands, including assurance there will be no police float next year and affirmative action for black transgender women and indigenous people on Pride Toronto’s staff.

The demands were accompanied by the clenched-fist belligerence we now associate with BLM, and the usual identity-politics jargon about “inclusive and safe” spaces, “marginalized communities” and the like. Since Pride is amongst the most politically correct organizations on the planet, it was pretty weird to hear Alexandra Williams, BLM Toronto’s co-founder, accusing Pride Toronto of “anti-blackness.” Evidence, Ms Williams? Anyone? But precisely because Pride is so politically correct, arguing with black activists simply wasn’t on. So Pride caved almost immediately, instead of, justifiable in the circumstances, asking the police to escort Ms Williams and her extortionate friends off the premises.

Nobody in Pride is anti-black. Black LGBT participants have never been unsafe or excluded from a parade, and never would be.

It’s an old saying, but a true one, that revolutions eventually eat their children, and here is a perfect example. BLM Toronto is spouting nonsense. Nobody in Pride is anti-black. Black LGBT participants have never been unsafe or excluded from a parade, and never would be. That’s not to say that Pride is inclusive to everyone. Last year, pushed by feminists, Pride denied permission for participation by the Canadian Association for Equality, a group on whose board I sit that supports men experiencing male-centric life stressors. But hey, just straight white men, so who cares, right? (In fact CAFÉ serves straights, gays, and all races.) So forgive me a touch of Schadenfreude at Pride’s BLM predicament.

If Martin Luther King were here to comment on the Pride incident, he would be appalled at BLM’s inversion of his dream.

If Martin Luther King were here to comment on the Pride incident, he would be appalled at BLM’s inversion of his dream. King’s vision of equality and integration had children judged by the content of their character, not the colour of their skin. The BLM movement does nothing but judge by the colour of skin, and in their view, individual character is meaningless: to be white is to be racist and to be black is to be a victim.

Integration? That’s old news. Separate floats is a symbol of re-segregation, but that is the natural outcome of blacks’ abandonment of King’s principles, and the decision to follow the angry, white-hostile, America-damning, separatist black leaders that followed on King’s death: Malcolm X, Louis Farrakhan, Al Sharpton, Jesse Jackson, Kweisi Mfume,  and the smooth-tongued, but equally separatist Ta-Nehisi Coates.

BLM is not a “fringe” movement, as one colleague suggested to me. The unhealthy impulse to blame white racism for all black ills trickles ever downward into our culture. Take for example a recent New York Post story about the posh K-8 Bank Street School for Children on the Upper West Side of Manhattan. In the interest of fighting discrimination, its 430 children’s classes are colour-segregated. White children are made to feel bad about “the prevalence of Whiteness and privilege,” while the black children are taught to be proud to their race, and offered treats and privileges.

Even for progressive parents, this was a bridge too far. One parent commented, “One hundred percent of the curriculum is what whites have done to other races. They offer nothing that would balance the story.” A second said, “Any questions they can’t answer they rationalize under the pretense of ‘institutional racism,’ which is never really defined.”(Abstract sins one cannot defend against are the hallmark of totalitarian states.) According to the slide presentation, seven other New York schools named in the article segregate students “by race-based affinity groups.”

Since Pride is amongst the most politically correct organizations on the planet, it was pretty weird to hear Pride Toronto accused of “anti-blackness.”

Want to produce a future grievance collector and reverse racist? See above.

You would think, from BLM rhetoric, that all blacks are disadvantaged and fear universally racist police. In fact, more than 50% of blacks in the U.S. occupy the middle class, while only 25% are actually poor. In the latest Pew poll on views of race and inequality, “roughly half (51%) [of black Americans] say their race hasn’t made a difference in their overall success, and just 8% say being black has made things easier.” And a post-Ferguson New York Times survey found that only 13% of blacks saw the police as their enemies.