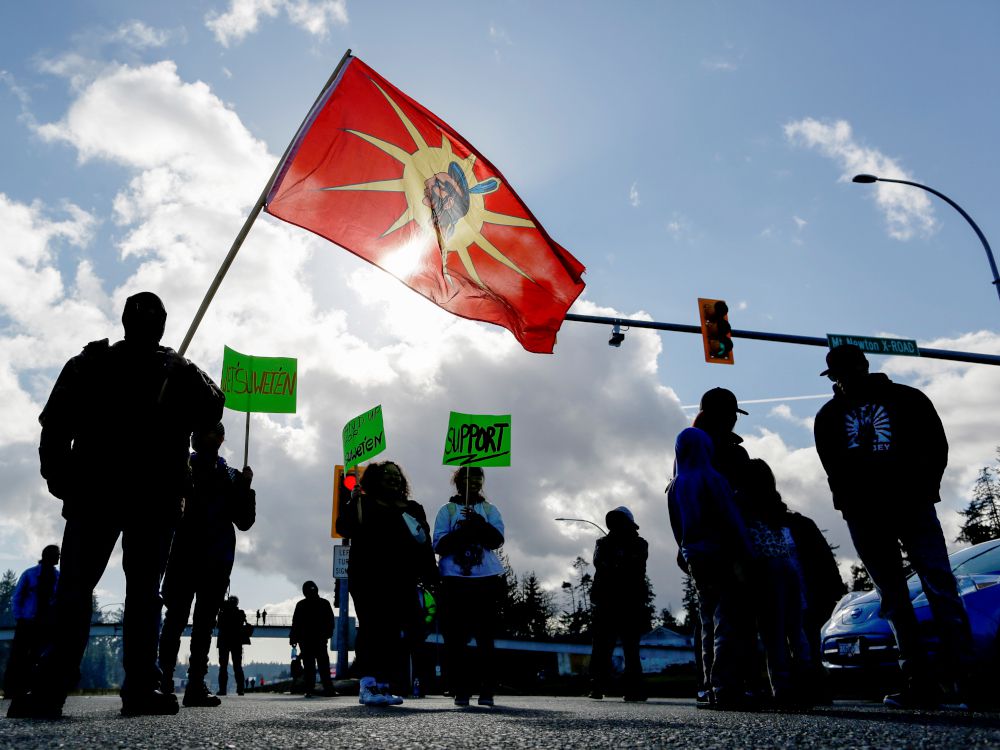 Supporters of the Indigenous Wet'suwet'en Nation's hereditary chiefs block the Pat Bay highway as part of protests against the Coastal GasLink pipeline, in Victoria, on Feb. 26, 2020. Photo by Kevin Light/Reuters

It cannot be overemphasized that the protest performers, tricked out in their Antifa-style garb and masks, while exploiting the good name of all Wet’suwet’en for optimal media exposure, do not represent their larger community

Prime Minister Justin Trudeau’s recent appointment of eco-warrior Steven Guilbeault to the environment portfolio struck me as a boost to the renewed protests in British Columbia’s Wet’suwet’en territory against the Coastal Gaslink Pipeline (CGL).

CGL’s pipeline is, in youth’s crude parlance, a big freaking $6.6-billion project. More than half complete, by 2023, the pipe will run 670 kilometres from northeast B.C. to Kitimat on the West Coast, where LNG Canada is building an $18-billion terminal. Export of the low-emission liquefied natural gas to Asia, which is being used to replace high-emission coal-fired generators, should begin in early 2025.

Barbara Kay: In B.C., a small band of unelected Indigenous leaders continue to illegally block gas pipeline Back to video The project is an economic bonanza for everyone: billions in royalties to government over the Kitimat plant’s projected 40-year life; employment for thousands of Indigenous people; First Nations benefits agreements to fund new housing, skills training and cultural resources, not to mention $2.7 billion already awarded to First Nations and other locally owned businesses.

CGL has signed impact and benefit agreements with 20 councils along the pipeline route, including five elected band councils from the Wet’suwet’en nation, who are solidly backed by their band membership. But several unelected hereditary chiefs — mostly men — chose to dissent, and are bent on its obstruction. Pro-CGL female hereditary chiefs have complained of being arbitrarily marginalized and disempowered by those male chiefs, but that’s a whole other story.

The material crux of the saga is that the area of the Morice River crossing, a pivotal point in the standoff, has, for seven years, despite injunctions and RCMP intervention, been continuously blockaded by Indigenous outliers. Even attempts to study the area by scientists and archeologists have been routinely thwarted.

Surrounding the Wet’suwet’en hereditary chiefs are numerous agitators, both Indigenous and non-Indigenous. Anti-development Indigenous groups and Antifa-style anarchists, mutually contemptuous of government and laws, and further linked by a common penchant for “direct action,” formed a symbiosis long ago.

The professional anarchists are seasoned mischief-makers who passed along their well-honed trademark tactics — highway and railroad blockades that offer big bangs for small bucks — to Indigenous activists. In pre-COVID 2020, these antics caused havoc, shutting down railroads and bringing the country to a virtual standstill. Anarchist websites like itsgoingdown.org and Submedia keep the anti-colonialist pot bubbling, and funding from extremist environmental groups keep the flame under the pot alight.

It cannot be overemphasized that the protest performers, tricked out in their Antifa-style garb and masks, while exploiting the good name of all Wet’suwet’en for optimal media exposure, do not represent their larger community.

At the early-2020 peak of CGL protests, five hereditary male chiefs stood united against the project on land sovereignty issues that now appear to be mostly resolved. Only a few remain, grounding their claims in Wet’suwet’en “law” (a misnomer for uncodified cultural norms).

But codified Canadian law always holds sway. According to the Supreme Court’s 1997 Delgamuukw ruling , the Wet’suwet’en land title, as yet undefined, is a limited form of ownership, offering a vote, but not a veto over the Crown’s use of the title land for the public good. The CGL pipeline is such a use, and these dissenters’ obstruction is illegal.

Also worthy of emphasis: on the corporate side, everything was done by the book, as such ventures must be in our era of environmental alarmism coupled with reverence for Indigenous rights.

CGL followed all relevant legislation relating to heritage and archeological protections. Exhaustive environmental assessments were undertaken. For 10 years, all Indigenous stakeholders, including the Office of the Hereditary Chiefs of the Wetʼsuwetʼen (the OW), as well as the various elected Wet’suwet’en village councils, were patiently consulted.

CGL invested more than 100,000 hours of field work to determine the best route for the pipeline, including gathering site-specific information on fish habitats, a major concern for this population. In 2015 alone, CGL’s field programs included over 11,000 hours of participation by local Wet’suwet’en people. Yet the OW failed to respond to requests for discussion, while simultaneously complaining of GSL’s failure to consult them.

The protesters’ most recent ploy was to occupy the site where CGL plans its legal drilling under the Morice River, which CGL environmental experts finally gained access to in 2019. To meet the highest environmental standards, including accommodating numerous provincial and federal environmental regulatory bodies, CGL chose a concrete micro-tunnel — the most advanced and expensive, as well as the least invasive, crossing method.

A respectful distance from a nearby smokehouse and sweat lodge, it will run more than five metres below the river to avoid disturbing the waterway or its banks. But CGL’s offer of a technical briefing on the methodology was met with further protests, including the disabling of expensive equipment.

On Oct. 19, a letter was sent by CGL, under parent TC Energy’s aegis, to the OW, expressing frustration at the chiefs’ refusal of civil engagement, including: “Over the last two years, CGL has requested meetings with the Office of the Wet’suwet’en to discuss issues and concerns related to the project, over 40 times, with no response to schedule a meeting.”

Forty times? This isn’t a plucky David standing up to a hostile Goliath. This is a power-tripping squad of unaccountable, self-aggrandizing Lilliputians immobilizing a benign Gulliver. Because … well, because our history of land standoffs assures them they can.

The CGL pipeline will almost certainly be completed, but at what cost? There’s no downside — in fact, it’s all media-amplified upside — for the activists to continually extend their standoff. Only the corporations and stakeholders suffer. So perhaps observers of this tortuous process can be forgiven if we ask to be reminded, in such circumstances, of who are the powerful and who the powerless in Canada?