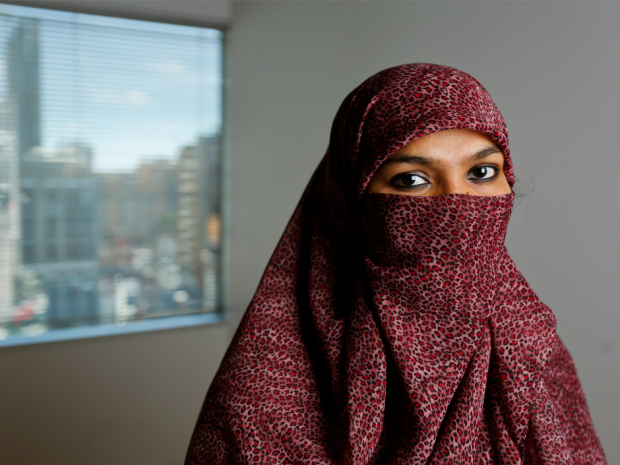 Barbara Kay: It was the snitch line, not the niqab stance, that hurt Harper

Zunera Ishaq, the Toronto woman at the centre of Canada's niqab debate, photographed at a Law Firm in downtown Toronto, October 8, 2015.

I approve the “fordfest” neologism; but I have reservations about “pulling a niqab” as an “ugly populism.” I think Harper’s stand on the niqab was principled. If he had only quit while he was ahead on it, he might have ridden it to more seats and a Liberal minority government.

Stephen Harper didn’t plan on the niqab taking centre stage as a selling point for re-election. But the Federal Court of Appeal’s snub of the government’s position on face cover during the citizenship ceremony – off! – forced the issue by telling the government their proposed ban contradicted the challenging woman’s Charter right to cover herself according to her belief system.

When he announced his government would pursue the matter further up the juridical chain, and in fact consider a ban throughout the public sector, as Quebec is in the process of doing, Harper knew he’d have solid support, but was probably astonished at the extent of the surge polls showed for his stance. No politician in his right mind, in the midst of a volatile and unpredictable campaign, would have ignored the potential for votes springing from such widespread positive passion on a position he alone had chosen to own. So no blame should be attached to his exploitation of the issue.

It clearly wasn’t the niqab issue that sank him. However, the niqab issue peaked too soon. If it had come to a boil two weeks later, it might not have won the election for the Conservatives, but it might have delivered more seats in Quebec, where the population is virtually unanimously in support of the ban, and where Mulcair’s self-imposed straitjacket on the issue was a tipping point leading to the huge ebb tide in NDP fortunes on election night.

I think Harper’s big mistake was in taking discontent with the niqab for permission to go big on all culturally-rooted misogynist practices. His proposal for a tip line to report “barbaric cultural practices” like forced marriages to the RCMP was overkill, and struck a sour note, even amongst those Canadians – like me – who were his staunchest supporters for a face-cover ban.

Face cover is a very specific, very public practice that is quite separate from “barbaric” cultural customs carried out in private. Face cover is more than the sum of its single part. As I have argued in many columns over the past few years, face cover is charged with so much negative political, ideological and cultural baggage, it does indeed cause “harm” to the social fabric. I firmly believe Quebec is abiding by a precautionary principle that is wise. Endorsing face cover in situations where the public has no option, and must deal with a covered representative of the government – nurse, policewoman, teacher, passport control officer – is to endorse a barbaric custom entirely at odds with the principles of openness and social reciprocity we take for granted as a social right, but which need protection. Harper recognized this wisdom, and that is where he should have stopped.

Don’t get me wrong. I am very troubled by practices like forced marriage, which is a retrograde, tribal custom that should have no place in our society. We know it is happening in certain cultural communities in Canada, and I applaud any government that tackles the problem.

But there was no pressing need to bring it up at this time, and no public incident that facilitated its organic emergence into public debate. Unlike the niqab, nobody from South Asia was demanding that the government recognize forced marriage as commensurate with Canadian values. And the “tip line” has odious Orwellian connotations to it. It had a seriously chilling effect, and did indeed seem to cast Harper’s “popular” niqab stance in the light of “populism,” even “ugly populism.”

The result was that people who quite defensibly resist face cover in the citizenship ceremony – or in the giving and getting of pubic services – now found themselves in the highly uncomfortable position of seeming to endorse Stasi-era tactics of social control. No strategy is more calculated to bring out racist mischief-makers and vengeful false allegers than a snitch line. No policy is more likely to make entire communities feel singled out as inherently suspicious than a snitch line. And no policy is more likely to make the party that proposes it look imperious, bullying and nativist.

The Conservatives blew it. They occupied what was perceived as the moral high ground by most Canadians, and then, thinking that was base camp rather than a distinctive summit, kept climbing into thin air. They ran out of oxygen, and deserved to.