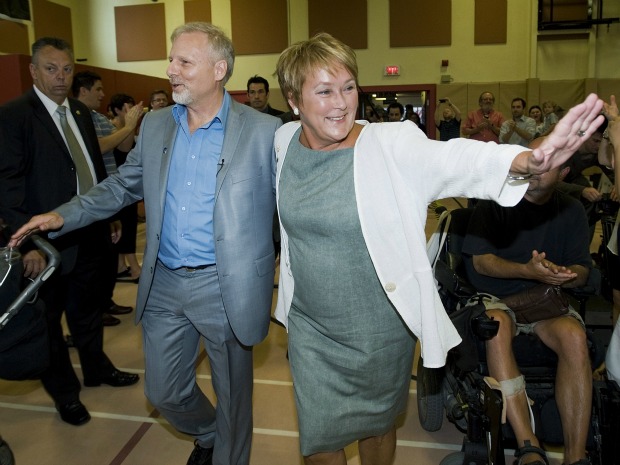 Parti Quebecois Leader Pauline Marois arrives at a community centre with PQ candidate for the riding of Rosemont Jean-Francois Lisee during an election campaign stop in Montreal during the 2012 election campaign.

Jean-François Lisée, the Quebec minister charged with improving government relations with the province’s anglophones, has a way with words.

Words that soothe, words that flatter, words that seem to encourage anglos are, you might, say, M. Lisée’s stock in trade. Since the Parti Québécois was elected as a minority government last fall, M. Lisée has been deployed as a rhetorical anti-depressant to calm anglo angst over the aggressive crackdown on English services the new government is pursuing.

This week, for example, when the Quebec language police made a laughingstock of themselves (yet again) for harassing a Montreal Italian restaurant because its menu offered “pasta” instead of the French “pâtes,” M. Lisée was trotted out to deplore the OQLF reaction as “overdone.”

The reality is that M. Lisée’s good-cop words almost never seem to link up with government action that benefits the anglo community. Last month, for example, M. Lisée happily announced he had deterred the government from restricting availability to municipal services in English. The next day a senior civil servant openly contradicted him.

M. Lisée’s bromides are also inconsistent with attitudes and proposals he has manifested in the past. Lest we forget:

Five years ago M. Lisée proposed a kind of “literacy test” for new Quebecers, even for Canadian citizens from other provinces. Two years ago, M. Lisée proposed the abolition of English CEGEPs. Just over a year ago, he solicited his blog audience for anecdotal evidence of Montreal anglos who wouldn’t speak French. Regarding this last, it is not perhaps entirely coincidental that Montreal saw a number of literally anglo-bashing incidents during and after last fall’s provincial electoral campaign.

M. Lisée is a dyed-in-the-wool separatist, who eagerly offered his services to radical ethnic nationalist Jacques Parizeau in 1994. He is a member of the current PQ’s sovereignty-strategy committee. Nothing he ever says or does is untainted by his commitment to advance Quebec’s secession from Canada. His anglo-sympathy tours are a cynical tactic to deflect media attention from the vise-tightening, anti-English machinations of the Marois government.

On Wednesday M. Lisée unleashed a new barrage of hollow banalities on the CBC’s The Current: “When we look forward for the next generations, our aim is to have a French majority that is secure and an anglo community that is secure…” and “what we’re trying to say is that it’s not a battle any more, it’s a common cause.”

This is political snake oil. The anglo community in Quebec is not secure. It is in a state of existential crisis. Every move the PQ government makes contributes to anglophones’ sense that they are a community under siege.

If it is not a “battle” anymore, it is only because Quebec anglophones are legally and morally disarmed. With so few ridings in their command, they have political suitors in the Liberal and CAQ parties during political campaigns, but no champions in office. They can expect no support from the federal government, whose longstanding policy – Liberals and Conservatives alike – is to avoid gestures that may inflame Quebec nationalism, and to look the other way when the Quebec anglo community’s rights are thrown under the bus.

There is no “common cause” in Quebec. Anglophones are second-class citizens watching their already diminished rights, their institutions and their identity shrinking before their eyes. They feel isolated and increasingly vulnerable, as well they should.

M. Lisée gave his government’s game away when he shed his avuncular mask momentarily a few months ago and lectured anglos to “Stop doubting. Stop asking permission to be Quebecers…You are Quebecers. Get over it.”

Fine sentiments to the untrained ear. But to the initiated, he sent a strong message when he pointedly used the word “Quebecer,” not “québécois.” In Quebec that is a meaningful distinction implying a chauvinistic difference. Anglos in Quebec know they are not really wanted on the ethnic nationalist voyage, but they will not and should not “get over it.”