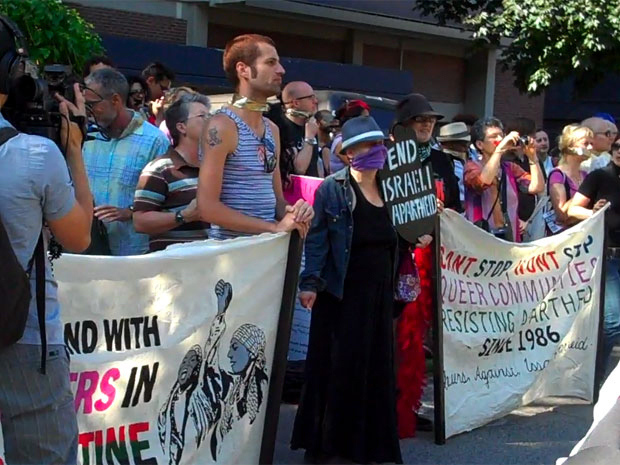 Queers Against Israeli Apartheid's preoccupation with gay-friendly Israel as the alleged cause of regional strife was ridiculous.

In my column Wednesday I introduced my subject – the dictatorship of political correctness – with what I thought was a joke: “refer to Caitlyn Jenner as ‘he’ on Twitter and wait one hour for the cancellation of your talk at (insert university here).”

At the time, I wasn’t aware that the Jewish National Fund of Canada (JNF) had recently disinvited former Arkansas governor and U.S. presidential hopeful Mike Huckabee from his role as keynote speaker for their annual gala on Oct. 15 in Ottawa, and essentially, for that exact reason.

Mr. Huckabee did in fact make an insensitive and silly joke about transgenderism at a National Religious Broadcasters convention, saying he would have pretended to be trans in high school if he’d known it would allow him to shower with the girls. Lame? Excruciatingly so. But was it “degrading hatefulness towards and about transgender people,” as LGBT activists claimed in their petition to boot Huckabee at change.org?

The petition also claimed that Huckabee had publicly supported Josh Duggar of the TLC reality-show 19 Kids and Counting, who as a teen allegedly molested two of his underage sisters and a family friend. That accusation is not just an exaggeration; it is a calumny that should not stand.

Huckabee is a personal friend of the Duggar family. Here is what he wrote May 22 on his Facebook page:

Janet and I want to affirm our support for the Duggar family. Josh’s actions when he was an underage teen are as he described them himself, ‘inexcusable,’ but that doesn’t mean ‘unforgivable.’ He and his family dealt with it and were honest and open about it with the victims and the authorities… No one needs to defend Josh’s actions as a teenager, but the fact that he confessed his sins to those he harmed, sought help, and has gone forward to live a responsible and circumspect life as an adult is testament to his family’s authenticity and humility… Janet and I love Jim Bob and Michelle and their entire family. They are no more perfect a family than any family, but their Christian witness is not marred in our eyes because following Christ is not a declaration of our perfection, but of HIS perfection. It is precisely because we are all sinners that we need His grace and His forgiveness. We have been blessed to receive God’s love and we would do no less than to extend our love and support for our friends. In fact, it is such times as this, when real friends show up and stand up.

There isn’t a word in this entire dignified posting to suggest Huckabee supports what Josh Duggar allegedly did. Anyone who has known a family in which one member brought disgrace on himself and embarrassed his family knows how important it is that friends stand with you in your hour of sorrow and isolation. Nobody knows if or when they will endure that hour, but if it comes, we should all hope we have friends like the Huckabees.

Josh Cooper, JNF Canada’s CEO, has stated that the petition (signed only by about 30 people as of a few days ago), “had absolutely no impact whatsoever” on the decision to cancel Huckabee’s appearance, but that his disinvitation came about because “the media spotlight has recently focused on Mr. Huckabee’s comments about issues that bear no relevance to JNF or autism.” There may be some gullible souls out there who believe JNF has not caved to pressure from the LGBT petitioners, but not many, I think.

It is especially disturbing in the JNF case that they should truckle to LGBT militants, of all groups.

Unfortunately, JNF is contributing to a cultural malaise. Disinvitation in the face of the merest whiff of progressive grievance is becoming a reflexive response when any minority group claims that it has suffered an offence. The salon des désinvités is growing apace. Between 1987-2009 (22 years), there were 62 speech cancellations at universities in the U.S.; between 2009-14 (6 years), there were another 62. This is a disconcerting trend.

It is especially disturbing in the JNF case that they should truckle to LGBT militants, of all groups. JNG’s mission is to promote Israel’s healthy development. But in spite of the fact that Israel is famously gay-friendly, the LGBT community is notoriously Israel-hostile. They supported the dreadful group, QuAIA (Queers against Israel Apartheid) during Pride, even though their aggressive chanting in the Toronto parade – remember “Fist by fist, blow by blow, apartheid state has got to go”? – clearly endorsed violence and exterminationist hate speech.

This would not have been tolerated for a minute if directed against any other entity in the world other than the Jewish state. Many LGBT activists are also deeply engaged in the BDS movement, which demonizes Israel and calls for its elimination. Given their record, LGBT activists are amongst the last people on earth a pro-Israel organization should defer to.

Mike Huckabee’s record on Israel is impeccable. Does JNF Canada think that Israel has its pick of people of that stature lining up to declare their love and support for Israel? This insult will be remembered, and not just by the Huckabee family, but by the millions of evangelical Christians who have been vicariously insulted along with him.

As well it should be.

As a Jew whose father and sister, decades apart, were both honorees of the JNF and who has been a long-time, faithful supporter of the JNF and its manifold good works, I am ashamed and embarrassed by this hasty, ill-considered, pusillanimous, divisive and doubtless costly decision.

And I am sure there are more than 30 people who agree with me.

North Korea may be starving. Um, yeah … we’ll get back to you. And Thursday’s other reasons to fear for humanity

China says it will send food aid, if North Korea asks for it. The U.S. State Department says it's heard the reports, but has no plans to help

MMVA host Ed Sheeran on drugs, the single life and One Direction

For the past four years, diminutive pop star, friend to the famous elite (Taylor Swift! One Direction!) and occasional match maker Ed Sheeran has been an unlikely side attraction at the Much Music Video Awards; Now 24, a leaner, more world-weary Sheeran returns to the MMVA stage, this time as its...

‘Why do I need a computer to figure out this part of my life?’ Apple’s Health app lets users track sexual activity

New features on Apple's pre-installed 'Health' app will allow users to track their sexual activity, namely whether or not they used protection and the time of day they had sex

Brian Williams out as NBC Nightly News anchor, will remain at network in lesser role