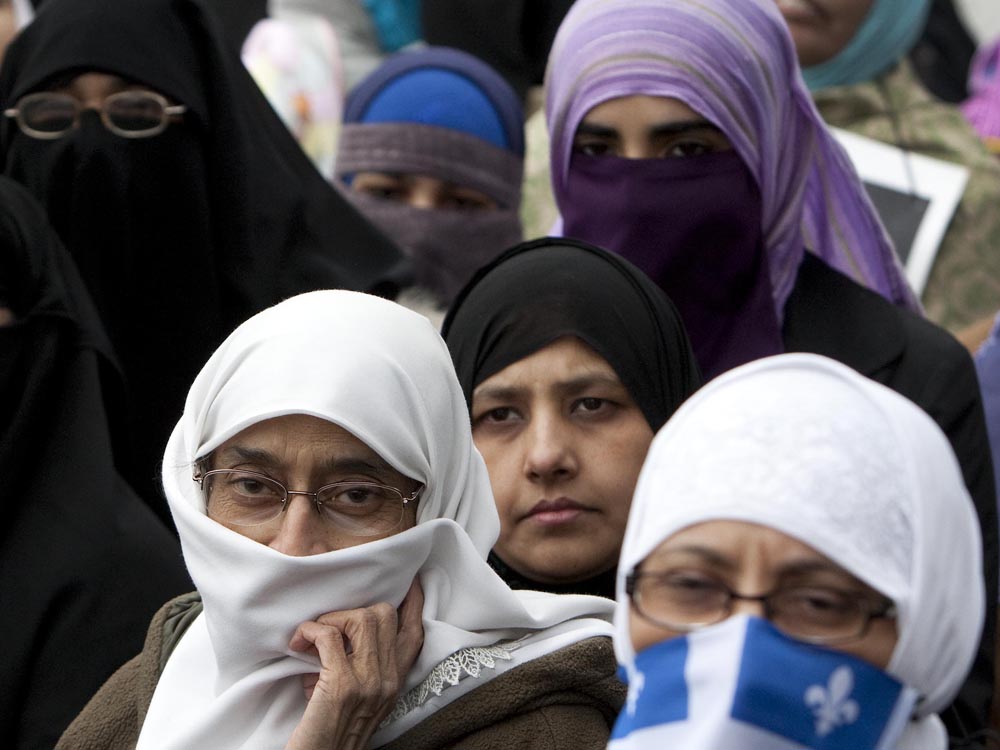 Quebec women attend a protest in 2010.

As was widely anticipated, Quebec’s Bill 62, banning face cover in the realm of public services, will be legally contested: by an individual niqab-wearing woman, supported by the CCLA and the National Council of Canadian Muslims. Prime Minister Justin Trudeau is considering how his government too may “weigh in” on the challenge.

Amongst the (anglophone) chattering classes a consensus has formed that the challengers will win on constitutional grounds, in that women have a Charter right to dress as conscience dictates.

“Dress.” There’s the constant rub. I hope the court will see the difficulty here. While I make no comparison whatsoever as to motivation or purpose, to me, the niqab is no more an article of clothing than a KKK costume. Both are cause-rooted uniforms, draped over clothing, designed to embody a strong message.

The court should consider the impact of that message on fellow citizens in situations where, like in the giving and getting of public services, they cannot choose their interlocutor. The message is conveyed whether or not the costumed individual underestimates or misunderstands its full significance.

For example, to some individual southerners the Confederate flag may represent nostalgia for mint juleps on the porch at sunset, but rightly read, that flag represents America’s shameful record on slavery. Likewise, some niqabi women believe they are merely expressing “modesty,” but rightly read, the niqab represents a fundamentalist strain of Islam’s oppression of women.

That there are relatively few niqabs in Canada is neither here nor there as a matter of principle. It seems to me strange and hypocritical that we see no problem in repressing even infrequent messaging associated with racism. But, fearful of being perceived as Islamophobic, we won’t endorse action against messaging that emblemizes gender apartheid.

Elsewhere, in countries mugged by reality, as dramatically changing demographics threaten established assumptions about democracy, religion and gender equality, a more honest public discussion is taking place. In fact, while we are needlessly guilt-ridden by statistically modest rates of Islamophobia, European countries are struggling with a statistically troubling and socially consequential rate of “Occidentophobia” (hatred of the West).

I’ve lifted that neologism from a sobering report out of the WZB Berlin Social Science Center, “Religious fundamentalism and out-group hostility among Muslims and Christians in Western Europe.” Published in English in 2014, this study, conducted in 2008, compares religious fundamentalism among thousands each of Christians and Muslims of Turkish and Moroccan origin (first and second generation) who identify with their religion in six European countries – France, Germany, the Netherlands, Austria, Sweden and Belgium — with regard to hostility toward out-groups: specifically homosexuals, Jews and, respectively, Islam/the West. (According to the report, Muslims of Turkish and Moroccan origin comprise roughly two thirds of the Muslim population of Germany, the Netherlands and Belgium, about 40 per cent of Muslims in Austria, one third of the Muslims in France, and ten percent of Muslims in Sweden.)

The author, Ruud Koopmans, serves today as the director of the WZB’s unit on Migration, Integration and Transnationalization. He asserts that fundamentalism includes a tripartite set of beliefs: i)  “that believers should return to the eternal and unchangeable rules laid down in the past”; ii) the rules allow “only one interpretation” of the Bible/Quran; and iii) religious rules “have priority over secular laws.” In order to distinguish (merely) believing Christians (Catholics, mainline and non-mainline Protestants) and believing Muslims from fundamentalists, respondents of both religions were asked to react to the three statements. The fundamentalist numbers are strikingly disparate. While fewer than four per cent of Christians agreed with all three statements, “somewhat less than half of (Muslims) agreed with all three statements.”

Koopmans then asked his respondents, both strong believers and fundamentalists, to respond to three further questions: “I don’t want to have homosexuals as friends”; “Jews cannot be trusted”; “Muslims aim to destroy Western cultures” (for Christians); and “Western countries aim to destroy Islam” (for Muslims).

Not all fundamentalist Muslim women wear niqabs, but all who wear niqabs signal support for fundamentalism. Bill 62 may not change their minds, but it sends the important message — one that may resonate with the daughters of Quebec’s niqab-wearing women — that pluralism, gender equality and social reciprocity are pillars of our culture’s “core identity” (yes, prime minister, we do have one).

The higher value of “social cohesion” has twice guided rulings against challenges to niqab bans by the European Court of Human Rights, which noted that the religious duty for women to cover was “hard to reconcile” with the principle of gender equality. Let us hope that our judiciary agrees and rules accordingly.