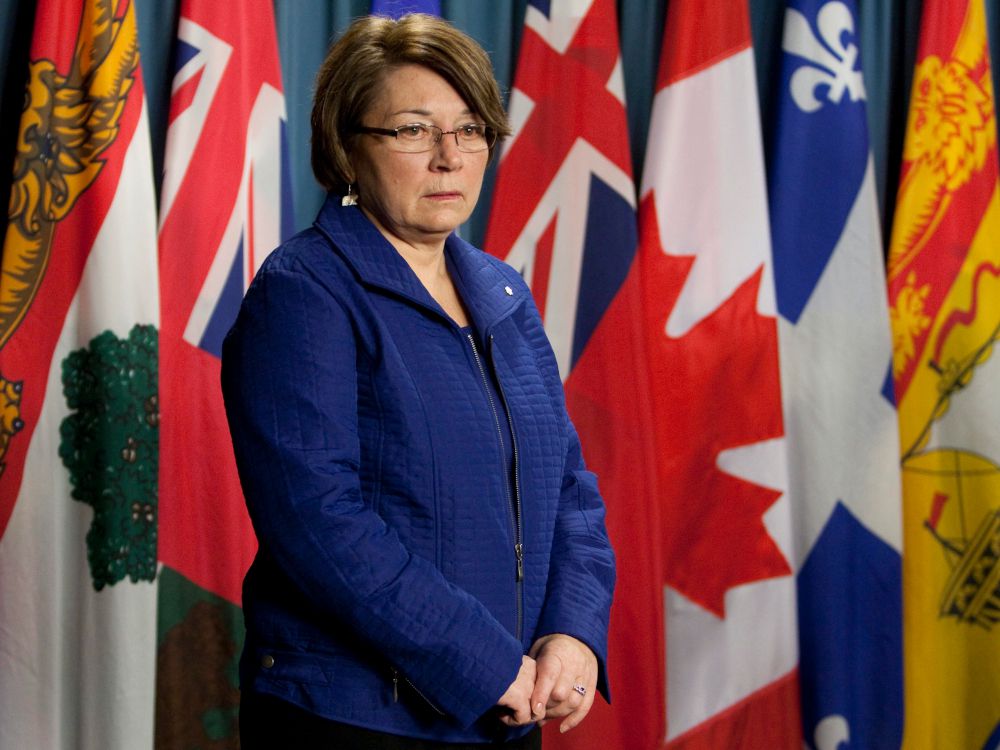 Barbara Kay: Mary Simon’s flippancy about French is a danger to Canada

Speaking as an Anglo-Quebecer from Toronto who put thousands of hours into achieving functional French because it was the respectful and Canadian thing to do, I was not amused by the flippancy of Simon’s remark

It was always very likely that the new governor general would be Indigenous, so Inuk leader and former ambassador Mary Simon’s appointment came as no surprise. And the news was warmly received: observers familiar with Simon and her past endeavours have expressed delight at the prospect of Rideau Hall’s calm, competent and clubbable new tenant.

The only fly in the ointment is Simon’s near-complete unfamiliarity with French. She knew this would be a sticking point, and had a zingy, but disingenuous, response at the ready, one I believe must have been vetted (or perhaps suggested) by the prime minister: she said she was indeed bilingual, only “my bilingualism is in Inuktitut and English.”

Barbara Kay: Mary Simon’s flippancy about French is a danger to Canada Back to video Speaking as an Anglo-Quebecer from Toronto who put thousands of hours into achieving functional French because it was the respectful and Canadian thing to do, I was not amused by the flippancy of Simon’s remark. In her new position, the words seem freighted with political symbolism. They even struck me as a rather ominous shot across the national bows: hello decolonization; au revoir central pillar of Confederation.

My theory was bolstered when I read my colleague Colby Cosh’s commentary on this topic, and was thereby informed that Simon had been a front-runner for the job many years ago (“It’s OK new GG’s not fluent in French,” Colby Cosh, July 8). In 2010, she reportedly told a mutual acquaintance of herself and journalist Don Martin that she would be, if approached, “gung ho” to tackle the job and, according to the acquaintance, “would welcome the chance to dive into immersion to become fluent in French.”

Knowing 11 years ago that she could well become a candidate in the future, Simon nevertheless chose not to take up the challenge of acquiring functional French (which is not rocket science, as several anglophone party leaders have discovered over the last several decades).

Cosh’s opinion is that as a “practical matter,” Simon “probably does not need to master French.” After all, she won’t need to give regular press conferences, nor will she be “appearing on ‘Tout le Monde en Parle,’ ” Quebec’s populist weekly talk show that regularly draws 1.3 million francophone viewers.

True enough. But she will be expected to regularly review our military troops and graciously converse with random members. What will it say about the status of French if she speaks at her ease with the English-speaking soldiers, but must chit chat through an interpreter with the French ones? The same goes for when she visits children in a Quebec hospital or hands out the Orders of Canada.

It’s lovely that Simon and her fellow Inuk can socialize in their own tongue, something other governors general could not do. But English will still be employed as the common language with all the other First Nations. So Simon’s competence in one of 60 Indigenous languages is more about optics than utility or Canadian unity.

Cosh adds that in any case, fluency in French “would be a lot to ask of a septuagenarian.” Perhaps, but as noted, she has had ambitions for the role since she was middle aged. Canada is a country of immigrants, who arrive here at different ages, but manage to become conversant in a new language.

In Quebec, people of Italian provenance are famously fluently trilingual. Francophones from the Middle East and North America pick up English with apparent effortlessness through their jobs and TV. In Europe, they would laugh at the idea that a third language is too much to ask of someone in high office.

Cosh admits that his defence of Simon’s language deficit may seem “slightly dismissive of the standing of the French language in Canada.” (Ya think? But then, no more so than Simon’s airy dismissal.) He claims he would personally be comfortable with a unilingually French governor general, which is easy to say: he will never be tested in that regard, for that will never happen. He knows it. We all know it.

Because of the word’s association with an ideology I reject, I don’t normally call people out on their “privilege.” But I will make an exception for the English-language privilege that Cosh exhibits here. I wonder if he realizes what a gift Simon’s cavalier dismissal of official bilingualism in Canada — and his endorsement of it — is to Quebec’s nationalist premier, François Legault, at this juncture in our history.

Via Bill 96, Legault’s new proposed amendments to the Constitution Act, 1867 would reduce the anglophone minority in Quebec from a confidently integrated community with official language rights to something like a guest community with privileges doled out according to Quebec’s legislative whim.

If enacted, the effect of Bill 96 could be the near-complete erosion of Anglo institutions in Quebec, with all the attendant consequences one can imagine. A fluently bilingual governor general can’t dispel Quebec nationalism, but a GG who considers French dispensable can exacerbate it.

And so, because it will be assumed here that Simon’s insult to Quebec was delivered with approval at the highest levels of government, that perception may amplify already solid support for Bill 96 amongst Québécois, and weaken the anglophones’ case for continued protection of their language rights.

Its further consequence may be to get the other provinces wondering why they should not liberate themselves from the heavy yoke of financial and cultural support for their francophones (which won’t upset Quebec in the least; Québécois nationalism is strictly geographical), if neither anglophone rights in Quebec nor francophone rights in Ottawa are considered inalienable. Where will it all end?

Loose lips sink ships. Our ship of state has just taken a hit.