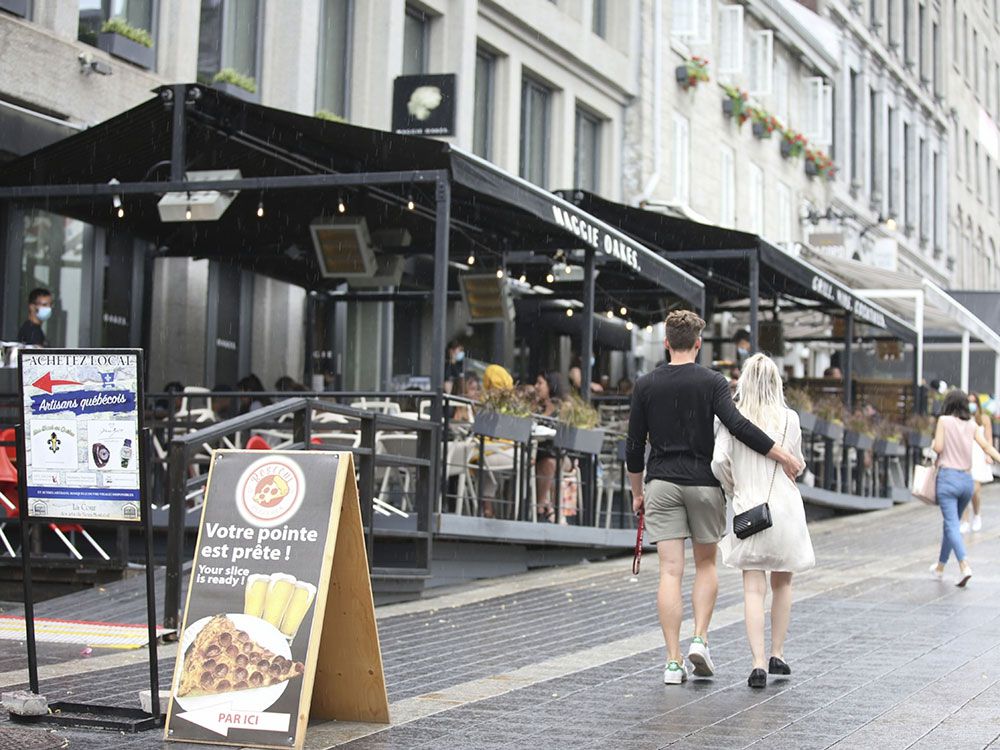 People walk past an outdoor restaurant in downtown Montreal on June 5, 2021. The effects of Quebec's Bill 96 on Montreal’s commercial life will be stultifying, predicts Barbara Kay. Photo by Christinne Muschi/Bloomberg

Barbara Kay: Montreal needs to make a run for it — before the doors to the rest of the world close

Oct. 7 brought an end to consultations on Quebec’s Bill 96, which amends the 1977 Charter of the French Language (Bill 101) and — unilaterally, never before attempted by a province — the Constitution Act of 1867. A few anglophone institutions were invited to the hearings, but their inclusion was pro forma. Bill 96 will pass through use of the notwithstanding clause.

The bill affirms Quebec is a nation, with French as its “common” as well as its only official language, adding several new “fundamental language rights” for French. It effectively creates both a Canadian and Quebec Charter-free zone in a wide range of interactions between individuals and the state. Even before passage, use of the P-word (“province”) has become politically charged, and quietly redacted from public usage by Bill 96 dissidents.

Barbara Kay: Montreal needs to make a run for it — before the doors to the rest of the world close Back to video The impact of Bill 96 on anglophones could be momentous. One amendment, which restricts access to English health and social services to those with education-eligibility certificates, could negatively affect upwards of 500,000 anglophone Quebecers. It speaks volumes that the Minister of the French Language will take responsibility for outcomes delivery in that sector away from the Minister of Health and Social Services. Bill 96 will also negatively affect young francophones by capping their numbers at English cegeps.

Bill 96’s effect on Montreal’s commercial life will be stultifying, provoking (yet another) flight of human and financial capital.

For Quebec’s 1980 referendum on independence, crafty premier René Lévesque devised a reassuringly soft question proposing “sovereignty-association” with Canada. Thanks largely to Pierre Trudeau’s fierce and unyielding opposition, it was decisively rejected (60 per cent to 40 per cent). What Bill 96 will produce, without fanfare, or a third referendum, or national debate, let alone national anguish, is … sovereignty-association.

Taxation without representation is the classic colonial predicament. Trudeau fils has endorsed Bill 96. The other party leaders have studiously avoided the topic. We Bill 96 dissidents in Quebec are on our own.

Language is Bill 96’s hammer, but the anvil is Montreal’s prosperity.

Montreal and area — home to half of Quebec’s total population, but virtually all Quebec’s anglophones and most of her 80 ethnic minorities — is multilingual and cosmopolitan; the rest of Quebec (ROQ) is monolingual and parochial. Montreal’s economy is “brain-centred;” ROQ is resource- and agriculture-centred. Montreal’s vision of society is multicultural and individualistic; ROQ’s vision, continually reinforced by Quebec’s political, academic and cultural (though not financial) elites, is assimilationist and collectivist.

Language is Bill 96’s hammer, but the anvil is Montreal’s prosperity

On a francophone talk show some years ago, I was asked if I considered myself a Québécoise. No, I said, I consider myself a Montréalaise. A frosty silence fell.

The City of Montreal is in the midst of a mayoralty campaign. Either incumbent Valérie Plante or her predecessor/challenger Denis Coderre will win. But a political neophyte, former Alouettes player Balarama Holness, has attracted attention to his futile candidacy with a bold promise to seek city-state status for Montreal.

Montreal as a city-state, or at least a special autonomous region — a status the Cree nation of northern Quebec has enjoyed for decades — was first raised as a serious idea eight years ago. In 2013 the Parti Québécois proposed language Bill 14, as draconian as Bill 96, which died when premier Pauline Marois’s minority government couldn’t enlist enough collegial support for its passage. Nevertheless, the attempt galvanized alarm sufficient to inspire a transiently influential city-state movement.

A 2014 Ipsos poll on the subject commissioned by that group elicited these key takeaways from Montrealers: Montreal is a distinct society within Quebec (90 per cent); to stop its decline, Montreal needs to take drastic steps to improve its performance (91 per cent); and Montreal deserves special status within Quebec because it is a world-class, cosmopolitan city (74 per cent). Those numbers would likely be as high or higher today.

More On This Topic Conrad Black: Quebec language law is a political gambit Rex Murphy: Justin Trudeau takes a knee to the 'nation' of Quebec Nobody supporting such a plan wants Montreal to actually separate from Quebec. We’d be happy if Montreal were declared a special economic zone, or a “charter city,” as proposed by the United Nations, with the power to create conditions, paramountly official bilingualism, that attract human capital and investment. Montreal’s rising tide would then lift all Quebecers’ boats.

Dream on, you say. Montreal has no political leverage to force the issue at the provincial or federal level. But what if we did?

Lucien Bouchard showed us the way. A cabinet minister in Brian Mulroney’s government, he betrayed his boss and friend, abandoning the Conservative party in 1990 to create the Bloc Québécois as Quebec’s “distinct society” enforcer in Ottawa. As we just witnessed in the federal election campaign, the BQ has proved wildly successful in that role.

We need a Bloc Montréal to represent Montreal /Greater Montreal’s “distinct society” at the Quebec National Assembly in Quebec City. The pivotal moment of the 1995 referendum campaign was the revelation — one that had never before occurred to the separatists — that “if Canada is divisible, then Quebec is divisible.” That was a sobering and clarifying moment. And Montreal has a greater need for augmented representation in Quebec City than Quebec has in Ottawa. After all, Quebec profits handsomely from its affiliation with Canada, while the opposite is true of Montreal and Quebec City.

A Bloc Montréal couldn’t form a provincial government, but it could, following the BQ template, offer collaboration in whichever party’s platform best aligned with Montreal’s special-status interests. Its representatives would be politically savvy entrepreneurs — both francophone and anglophone — and cultural community leaders. Young bilingual francophones in Montreal are friendly to the world beyond Quebec’s borders; many would embrace such a party as their preference.

Pushed on one side by Quebec nationalists and on the other by Canadian post-nationalists, the heavy barn doors separating Montreal from the world are closing. While there’s still time, Montreal should make a run for it.