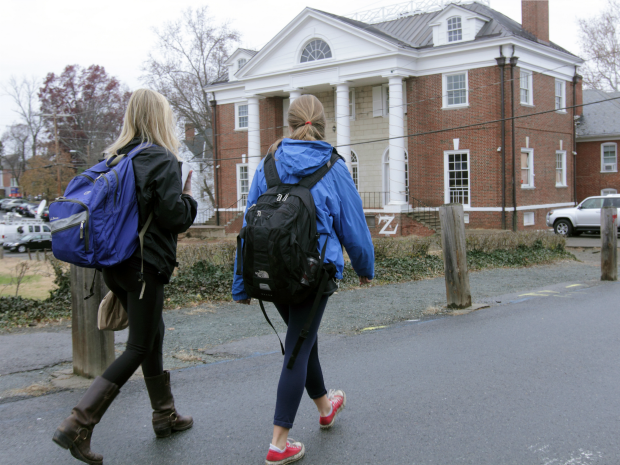 Barbara Kay: More rape statistics by the biased for the biased

The Phi Kappa Psi fraternity house on the University of Virginia campus was the scene of an alleged rape charge that later fell apart.

A new Forum Research telephone survey of 1,658 concludes that one in five women have been raped or sexually assaulted. Yet that widely contested figure is still not good enough for radical feminists.

University of Ottawa law professor Elizabeth Sheehy (whose previous claim to fame is a book that advocates justice provisions that would permit female victims of domestic violence to kill their abusers without legal penalty) insists the poll number is a “lowball of what’s happening here.” Sheehy says the poll question, “Have you ever been sexually assaulted or raped?” is inadequate, because “There’s just so many layers…to a person’s decision in her own mind as whether what happened to her was or was not rape or sexual assault.”

The actual statistics on rape look nothing like the surveys.

Precisely the problem. Physical assault leaves bruises or blood or broken bones. Robberies leave spaces where items once stood. Vandalism creates visible damage to property. Rape and sexual assaults are the only crimes dealt with by law enforcement where the “evidence” that a crime has taken place is left to the alleged victim to decide. What rape actually means nowadays is notoriously vague. (It used to imply some measure of force. If it doesn’t, it may not be great sex, but it should not be criminalized behaviour). It can mean anything from drunken-revels remorse, to drunken sex with one’s partner, to a sexual act not explicitly invited by the word “yes.” In which case Ms. Sheehy may be right when she claims half of Canadian women have suffered at least one act of physical or sexual violence since age 16.

It is worth revisiting the origins of rape-culture hysteria, because unlike other crimes, most of the surveys and reports about rape from the 1980s and 90s that ideologues rely on for their numbers were not fuelled by concerns about public safety. The parameters and methodology of many of those reports don’t stand up to interrogation, because they were conducted by theorists educated to believe that all heterosexual men are inherently dangerous to women.

Here for example is feminist scholar Alison Jaggar in her 1983 book, Feminist Politics and Human Nature, a standard text in North American universities: “From prehistoric times to the present, rape has played a critical function. It is nothing more nor less than a conscious process of intimidation by which all men keep all women in a state of fear.” Sentiments reprising this basic theme – that all men are potential rapists – can be found in literally hundreds of other staple feminist texts. Is it any wonder so many young women are confused about whether they have willingly participated, or been assaulted, in their sexual hook-ups?

And that is why the era’s surveys are unreliable. According to San Francisco’s National Institute of Mental Health in 1978, for example, 44% of women had endured a rape or attempted rape at least once. Such figures are inconceivable if one applies the criterion of “force.” And indeed force is but one criterion in these surveys, which often include soft questions  like whether a woman has had sex after being offered alcohol or drugs. Moreover, they are not community surveys – i.e. random samplings of populations, considered the gold standard of sociological polling methodology – but a small sampling of a very narrow subset of women.

The actual statistics on rape look nothing like the surveys. Sexual offenses represent less than one percent of all reported crime. Of course many rapes are not reported, but so are many other crimes not reported, including male rape and male physical assault. Multiply by 10 for unreported rapes and it is still but 10% of the 1% of all reported crimes. Women under 16 and women over 30 are in statistical terms at zero risk of rape. Even between the ages of 16-30, a woman’s real odds of being raped are one in 2000. And that number could be dramatically reduced if women took responsibility for avoiding high-risk situations.

What I have just written is objectively true, but I will be labeled a “rape denialist” for saying it, even though I not only recognize rape as a serious crime, but take the stand I do so that real rape victims’ ordeals are not dumbed down But in the moral panic game known as rape culture, you can toss any factual coin, and it’s heads: rape-culturists win, tails: rape “denialists” lose.