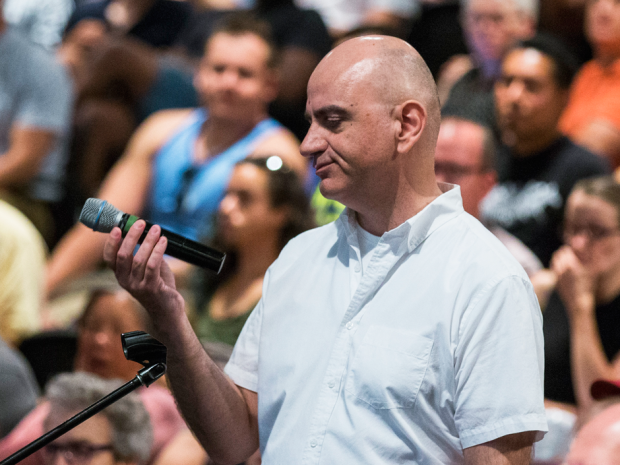 Joe Clark reacts after his microphone is turned off at a Pride Toronto event in August.

LGBT rights and pro-pit-bull advocacy are niche passions for the Ontario NDP’s Cheri DiNovo. The latter cause was my introduction to the MPP. Today’s column is about the former, specifically the recently-passed Bill 28, DiNovo’s “All Families are Equal Act.”

Motivation for the bill was the aim of bringing legislative compliance to a 2006 judicial ruling, in the case of MDR v. Ontario, to stop requiring same-sex couples to adopt their own children if they used surrogates or reproductive technologies. That, Bill 28 does. It also allows parenting agreements among as many as four people.

But DiNovo went farther still. In deference to transgender activists’ opposition to binary gender categories, her bill replaces most uses of the words “mother” and “father” in Ontario law, substituting for them “birth parent” and “parent.” According to DiNovo, “the right of people to be called neither mother nor father” is “equally important” to the right to be called mother or father.

Bill 28 passed not only without opposition from the province’s Progressive Conservative party, but with its leader, Patrick Brown, demanding his MPPs skip the vote if they couldn’t support it. This may explain why the newly elected MPP, 19-year-old Sam Oosterhoff, a social conservative, delayed his swearing-in until after the Nov 29 vote. Oosterhoff has publicly stated Bill 28 is “a horrible piece of legislation,” and, on Facebook, that it is “poorly written” and “disrespectful to mothers and fathers.”

Because Oosterhoff is a socially conservative Christian, accusations of homophobia rained down on him. But there are like-minded others, such as Toronto activist Queenie Yu, who’s voiced the hostility to Bill 28 from within parts of the Chinese community. “Chinese immigrants didn’t expect the Wynne government would outdo the communists and get rid of mothers entirely,” Yu said. She and Oosterhoff were hardly the only opponents of this bill.

The hearings on the bill, for example, produced scarifying criticism from Joe Clark, a designer of digital technologies for the disabled and a writer. Clark described himself to me in a telephone interview as the “most unpopular gay man in Toronto” (among other maverick acts that have stigmatized him and even led to threats against him, Clark registered a complaint to Pride Toronto against Black Lives Matter for their disruptive actions in last summer’s parade). He’s a controversial polemicist and what he has to say makes Oosterhoff’s comments look insipid by comparison.

Clark calls Bill 28 “the Handmaid’s Tale Act,” referencing Margaret Atwood’s dystopian novel in which women are coerced into bearing children for infertile theocratic elites. That’s because it “literally rewrites motherhood and fatherhood,” he says. “In fact, it redefines motherhood out of existence.” Considering the mandate for the bill as it was originally circumscribed by the MDR ruling, Clark says that “in a classic example of scope creep … this bill attempts to rewrite human biology.”

Mocking the transgender argument that people are whatever gender they feel they are — male, female, something in between, or none of the above — Clark refuses to concede longstanding facts of life: “Men don’t have vaginas or female anatomy … and women don’t have penises,” he says. “There are two sexes — two, not an unknown number.” Clark also ridicules a change that Bill 28 will make to Ontario’s Vital Statistics Act. Where it now reads “’birth means the complete expulsion or extraction from its mother of a fetus…” DiNovo is changing to “the complete expulsion or extraction from a person of a fetus…” It is, Clark says, as though a mother were, like Atwood’s handmaids, “generic, bodiless, (and) sexless.”

Clark played hardball with the committee, but he had a point when he lectured the MPPs that they had never been elected or given a mandate to socially re-engineer the province. He testified: “you had one job: clearing up parental rights for gay and lesbian couples. Yet you arrogated the right to … deny biological sex.” Speaking to Di Novo, he reminded her, “Human biology did not change because you got elected to the Legislature, Ms. DiNovo…”

There was only one reporter in the room for that, and her subsequent write-up barely mentioned Clark. He might be a gadfly, but he deserves wider attention. Brainy and deeply knowledgeable on these issues, Clark has been a serious chronicler of the gay movement for decades, with a legitimate claim to speak authoritatively from a marginalized perspective about a tense, often-acrimonious relationship between gays and transgenders that flies below the general public’s radar.

“Gays and lesbians should have had an amicable separation from transgenders many years ago,” Clark believes (I’ve also long held this opinion). The transgender agenda to deconstruct biology out of existence can only harm gay rights, he says, as the free-for-all of gender fluidity subsumes all sexual identities. The identity of gays and lesbians is distinctly connected to their sexual orientation; he doesn’t want them to be robbed of that. He calls DiNovo “The single greatest enemy that the legitimately constituted gay and lesbian community in Ontario faces.”

Heterosexuals, whether socially conservative or just plain commonsensical, simply can’t say this kind of thing nowadays without serious consequences. And when a biology-friendly gay man says it, he is ignored. Cheri DiNovo is wrong, but she is, alas, the Zeitgeist That Must Be Obeyed.

You can see for yourself what Clark has to say about Bill 28 (and other things) at his blog.