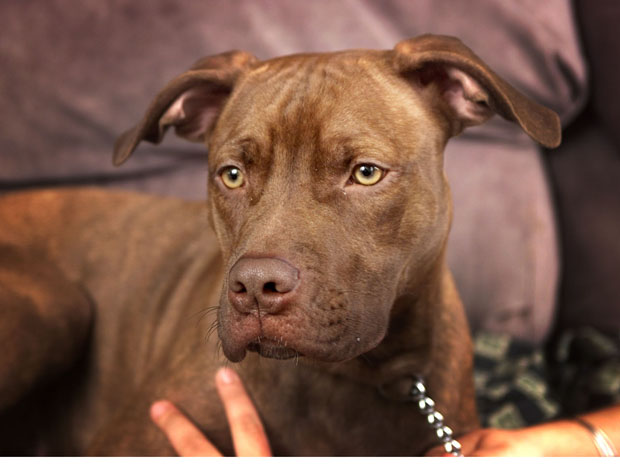 Barbara Kay: Ottawa’s laissez-faire position on the pit bull ban must be reversed

The 2005 Ontario ban on pit bulls was a good idea, but mistakes were made in executing it. One was in giving municipalities “enforcement discretion.” Ottawa simply didn’t bother enforcing it at all.

The pit bull that mauled 14-month old Ottawa baby Cali Leclair on the weekend, causing severe damage to her face, was put down on Monday. The dog had bitten another baby previously and should have been euthanized then as a matter of course. Decades ago it would have been.

But we live in more sentimental times where animals are concerned. Soft-hearted advocates want to treat aggressive dogs “humanely,” give them another chance, as though they were juvenile delinquents capable of sober second thought rather than non-rational creatures of instinct. In the case of pit bull type dogs, the truly humane thing would be to breed them out entirely, since almost a million pit bulls a year are euthanized in North America, more than all other breeds combined.

Why? Because people believe the propaganda about them put out by the pit bull advocacy movement – that they’re unusually lovable, loyal and eager-to-please pets who get a bad rap because dog fighters and thugs make them do bad things. They either buy them as pups or “rescue” them. Then they find out the truth. At least a third of North American pit bulls are dumped in shelters annually, most by owners who acquired them in good faith and tried their level best to socialize them, but couldn’t get past their discomfort with the breed’s inherent impulsive aggression.

Between 2005-2011 pit bull type dogs killed 128 Americans. Of the victims, more than half were family members killed by a household pet. So much for “bad owners.” They were no better or worse than any other dog owners. But badly socialized or even abused dogs of other breeds don’t tend to turn on their owners, while pit bull aggression toward any animal or human is entirely unpredictable.

The 2005 Ontario ban on pit bulls was a good idea, but mistakes were made in executing it. One was in giving municipalities “enforcement discretion.” Ottawa simply didn’t bother enforcing it at all. “The City of Ottawa has always taken the approach that we deal with problematic dogs regardless of their breed,” a police spokesperson said. “Any dog that isn’t well-trained or well-behaved is capable of biting.”

But biting isn’t the issue here, is it. Every time I write a column bashing pit bulls, I get that same mantra many times over: “All dogs bite.” Of course they do, but if Cali Leclair had been merely “bitten,” she might have needed a few stitches at most; she certainly wouldn’t be in hospital with a mangled face.

What happened to Cali Leclair was a maiming. So the question for Ottawa: Is “any dog” – well-trained or not – capable of a “mauling,” a “maiming,” a “dismemberment” or a “dogbite-related fatality”? These are the categories that constitute public safety hazards, not dog bites. When you consider those categories, you are basically talking about pit bull type dogs, Rottweilers and feral huskies, with other breeds trailing far behind statistically.

What those in power must understand is that this is not a civil rights issue. People have no inherent right to own a consumer product, live or not, that presents an elevated risk to fellow citizens and to the beloved companion animals of fellow citizens (very few attacks on other animals are reported, no matter how vicious and consequential). Therefore words like “discrimination” or “prejudice” should be inadmissible in any discussion of a ban.

We treat people as individuals under the law, because every human being is unique. That is not the case with line-bred animals, whose gene pool is rigidly monitored to produce in every individual animal the distinguishing characteristics of his line – that is, stereotypes. In the case of pit bulls, impulsive aggression is the stereotype, which is why they are the fighting dogs of choice. Thus it is absurd to treat vicious pit bull attacks as exceptions to a rule or the result of unusual circumstances. In April, 2012 the Maryland Court of Appeals got it right when it ruled, “When an attack involves pit bulls, it is no longer necessary to prove that the particular pit bull or pit bulls are dangerous.”

Ottawa’s municipal officials must reverse the city’s laissez-faire position on the ban and begin to enforce it with vigour, as should all other Ontario municipalities.