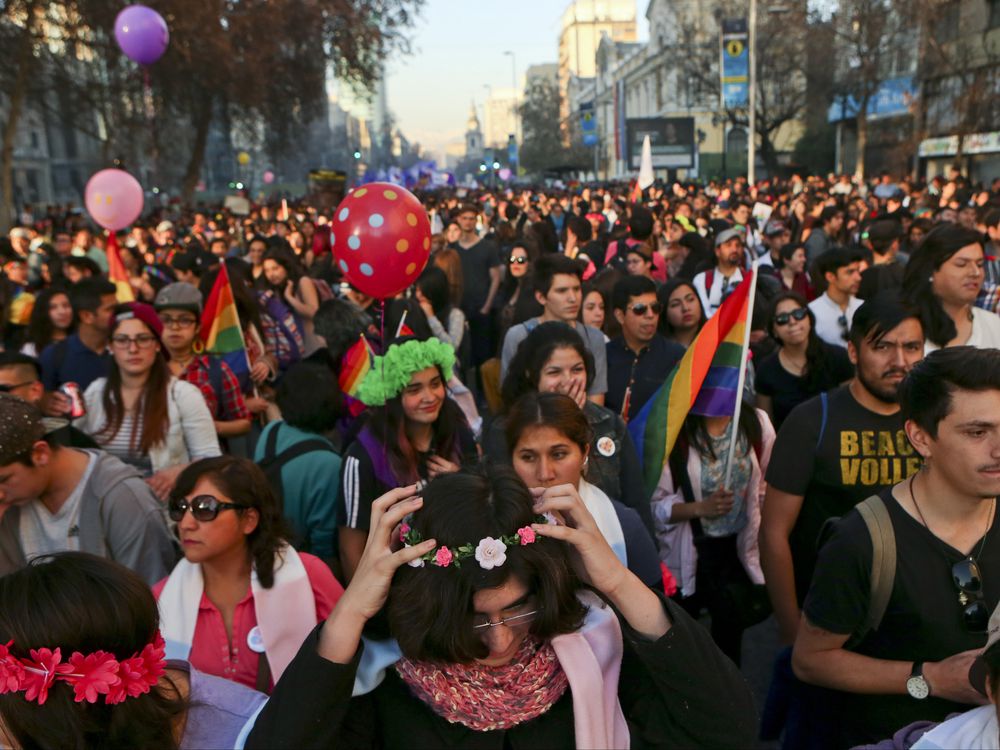 In this July 1, 2017 photo, Angela, below center, places a crown of flowers on her head as she attends a Gay Pride march alongside other transgender children in Santiago, Chile. The transgender children at the parade had socially transitioned to their chosen gender with the backing of their families. (AP Photo/Esteban Felix)

In a December 7th article, sexologists J. Michael Bailey and Ray Blanchard, unafraid of taking on difficult topics, describe three basic types of gender dysphoria (which is when someone feels they’re not the same gender as their biological sex). Posted on 4thWaveNow, a discussion group for skeptics of the growing phenomenon of transgendered children and minors, their article lists the three types as: childhood-onset gender dysphoria, experienced by both boys and girls; autogynephilia, a male-only phenomenon; and today’s worrisome subject, rapid-onset gender dysphoria (ROGD).

ROGD occurs almost exclusively to adolescent or older teenage females, an historic anomaly not yet understood or explained, and only lightly studied over the course of its recent meteoric rise from inconspicuousness to seeming ubiquity.

Before 4thWaveNow went up in 2015, those ROGD parents alarmed by the pedagogical, social-services and health-professional consensus they encountered favouring immediate medicalized transition for their sudden-onset daughters, had felt isolated in their resistance. 4thWaveNow has unified and emboldened them to demand a more cautious and prudent approach to ROGD.

Bailey and Blanchard’s report provides a typical ROGD profile these parents recognize only too well. “Out of the blue,” never having shown signs of gender dysphoria before puberty, a girl announces she is trans. She has always been socially awkward. She is likely on the autism spectrum, or suffering from anxiety, depression, self-harming, anorexia or Borderline Personality Disorder. She is also likely a lesbian (but may not yet be aware of that).

ROGD is an historic anomaly not yet understood or explained

This girl’s social world outside her family, Bailey and Blanchard explain, “glorifies transgender phenomena and exaggerates their prevalence.” Typically, the girl makes her declaration after a “heavy dose” of exposure to Internet influences. (Mothers I’ve spoken to referred to Tumblr and DeviantArt as prime influences. and New York researcher Jack Gieseking told a BBC interviewer last May, “There really isn’t a trans person I’ve met under the age of 30 who hasn’t been on Tumblr.”)

Influenced by peers coming out as trans, the young woman comes to believe she is also trans. Habituated to social marginalization, she is suddenly fussed over by a warm circle of friends. There is, Bailey and Blanchard note, a cult-like quality to the embrace.

The pressure to transition begins at once. She is encouraged to get on (off-label) cross-sex hormones that will render her infertile for life, and to consider surgery as soon as possible. Some jurisdictions allow mastectomies as young as 14.

Many parents, influenced by a bullishly trans-supportive cultural environment, and encouraged by their daughters’ enthusiasm, offer uncritical support for transitioning. By contrast, the skeptical parents think medicalization is too drastic for what could be a transient phase, and resist. What happens to them isn’t pretty. One concrete illustration tells the larger story.

Family Services Ottawa offers a support group for parents of trans teenagers. Linda MacDonald (a pseudonym), mother of a now 19-year-old daughter who had announced she was a boy at 15, joined it and posted her experience at a recent meeting on 4thWaveNow. Linda had resisted affirming her daughter’s decision to transition because of its suddenness, and because the daughter had a history of other psychological issues. She voiced her concerns to the group, expressing her opinion that ROGD was a “social contagion” rather than a true identity. Linda said she would not support medical intervention. When she finished, “the silence was deafening.”

I spoke both to Linda and to a witness who was there in the group that day. Several participants expressed open hostility to her. Linda says she was told, “You do not support your child. You belong in another group.” But there was no other group. Linda showed me several emails she sent to the family services program director asking for a group sympathetic to parents wanting to take a cautious approach to transitioning. In the reply, she was told there was, and would be, none. I spoke with the director of the FSO trans support group program who did not deny Linda’s account, but declined to provide any further explanation.

That account included Linda being escorted from the meeting by a security guard, and later being informed she was thenceforth banned. She isn’t bitter. Linda writes, “I feel nothing but sympathy for these parents … they are doing exactly what their doctors and social workers advise.” The question is, why are so many professionals pushing immediate transition instead of taking a “watchful waiting” position, which used to be the standard, responsible medical response to sudden changes in patients with a history of mental fragility? Why are so many gender therapists dismissive of normative therapy to assess girls presenting with ROGD holistically?

If an adult decides to identify as a different gender, so be it. But we know adolescents and children are immature and unsure of so much, so there’s clearly reason for concern when they make such a drastic, potentially life-altering decision. In another 4thWaveNow post on this subject, Jungian analyst and ROGD researcher Lisa Marchiano provides a useful distinction between an “identity model” of working with transgender people and a “mental health model.” The identity model stipulates that it is wrong to question a client’s self-determined identity: “Gender dysphoria is seen as evidence that someone is transgender.” Concerns about underlying conditions, even something as seriously consequential to executive function as autism, are perceived as denial of the person’s identity.

The mental health model looks at the underlying causes of distress and seeks to alleviate or manage symptoms, which can and does include medically transitioning to a new gender if warranted by the patient’s specific circumstances. For girls in distress for other reasons, including possibly realizing they are gay, the assumption that a gender transition will solve their problems is unrealistic and potentially tragic, as elevated post-transition suicide attempt rates demonstrate. And yet, shamefully, skeptical parents are routinely told they are “transphobic” and guilted into believing any resistance to medical transitioning could end in their child’s suicide.

In Bailey and Blanchard’s view, ROGD is a highly suspicious phenomenon with no scientific foundation. They compare it, in fact, to the very harmful — and discredited — acquired phenomena of Recovered Memory Syndrome and Multiple Personality Disorder, which saw epidemic social contagion in the 1990s. Implied is that one day, hopefully sooner than later, ROGD will be discredited as well.

Meanwhile, they’ve observed “the mental health and social relationships of children with ROGD get much worse once they adopt transgender identities,” yet more and more gender gatekeepers deny loving, responsible parents their natural role as protectors of their children’s best interests.