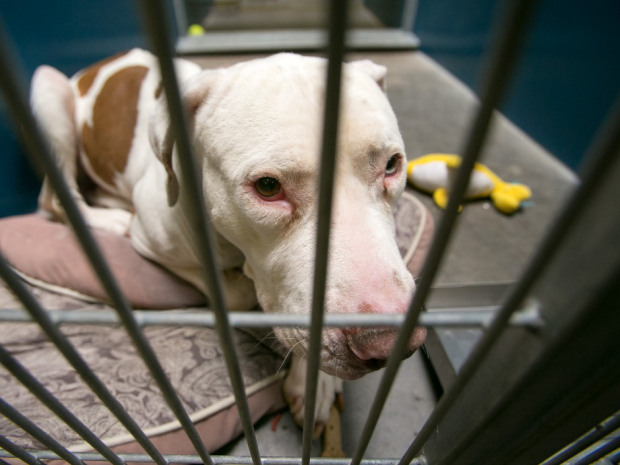 The pit bull advocacy movement (PBAM), one of our culture’s oddest phenomena, passionately resists all evidence that casts their beloved breed in a negative light.

November 9-15 is Awareness for Victims of Canine Attack (AVOCA) week. As if to mark the occasion – in the most negative way possible – the city of Sherbrooke, Quebec has announced the repeal of a two-decade long ban on ownership of pit bull type dogs, to begin January 1. Explaining the repeal, city officials claimed that “experts” had said the dogs were no more dangerous than other breeds, and that it’s difficult to prove that a dog is “purebred pit bull.”

Sherbrooke’s announcement comes hard on the heels of an opposite announcement from Aurora, Colorado, which just held a public referendum on the same repeal issue. The question asked was, “KEEPING OF PIT BULLS – Shall the people of Aurora adopt an ordinance allowing pit bulls back into their city?” The people of Aurora spoke unequivocally, with 68% of Aurora voters rejecting repeal. The same scenario played out in Miami-Dade county a few years ago, when a repeal of an existing ban was subjected to a public referendum.

The pit bull advocacy movement in both cases put on a well-organized and costly campaign. But ordinary people did not drink their Kool-Aid – that is, the false claim that pit bull type dogs are no more dangerous than other breeds. The “experts” Sherbrooke claims to have consulted are doubtless pit bull advocates and industry stakeholders, who prefer theories to epidemiological data. Moreover it isn’t necessary to prove that a pit bull is a “purebred,” since the entire cluster of pit bull type dogs is the problem. All fighting dogs have the same propensity to impulsive aggression and severe, prolonged mauling instincts. Identifying them is not difficult at all.

There is a reason over 35 countries have imposed partial or full bans on pit bulls, and that about 500 cities in North America ban them. In the nine-year period from 2005-13, pit bulls killed 176 Americans and accounted for 62% of the total recorded dogbite-related deaths (283), even though they represent only 6% of the breed population.

In an open debate, which a public referendum would have facilitated, this fact and other incriminating evidence would have persuaded people that pit bull type dogs are a public safety risk. In an open debate, it would have come to light that the Ontario ban on pit bull type dogs, in place since 2005, and also under pressure by pit bull advocates for repeal, has successfully – dramatically! – reduced the number of maulings and maimings, which is the whole point of a ban.

It makes no sense to introduce the “complaints-based system” Sherbrooke has in mind. What good is a “complaint” to a mauled victim or the owner of a dead pet dog or cat (pit bull type dogs are responsible for virtually all dogbite-related deaths of pets and other domestic animals)? Sherbrooke is putting the so-called “right” of people to own dangerous dogs above the right of people to live in safety.

The first principle of public safety is to protect people from themselves. Instead of posting signs advising people to drive safely, we impose speed limits. Instead of reminding people to avoid scalding themselves by turning the cold water on along with the hot water, we compel water companies to reduce the maximum heat level on their end. Instead of cautioning children to avoid falling from jungle gyms on to concrete playgrounds, we regulate a more forgiving playground surface.

In other words, public safety is about creating a friendlier environment in which people can go about their business without endangering themselves through their own negligence and carelessness. We know from experience that educating dog owners, asking them to enclose their dogs and any other number of precautionary measures are not adequate to protect them from pit bull type dogs, a disproportionate number of which are in the hands of society’s least responsible citizens.

When public safety measures work, they are invisible to the community. When someone fails to turn on the cold water tap before stepping into the shower and doesn’t get scalded, hospital logs don’t register his non-appearance. When pit bulls don’t inhabit a city and children don’t get mauled, that isn’t recorded. The fact that children are not getting mauled in Sherbrooke with the ban in place is therefore no reason to repeal it, but a reason to maintain it.

Sherbrooke officials could rethink their decision, calling for data from objective investigative experts with no skin in the pit bull industry (including shelters and rescue units with pit bull-skewed biases, not to mention veterinarian associations, who cannot afford to offend any single group of owners). Better still, let them throw the question to the public. Let victims tell their stories. Then let the people who have to live with these unpredictable animals, bred for the sole purpose of inflicting suffering, decide.