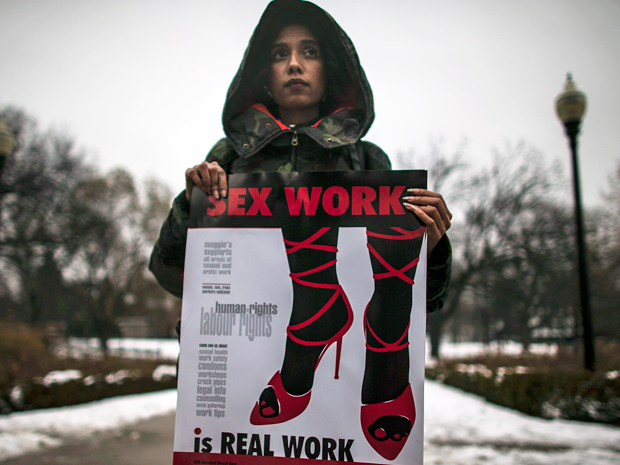 A happy-clappy view of prostitution has been persuasively marketed to the public, Barbara Kay says.

The Supreme Court of Canada has ruled that offences to the Criminal Code around prostitution are unconstitutional, reversing a 1990 SCC ruling stating that elimination of prostitution through law enforcement was a valid position.

What happened to change their minds? Not the squalid trade in human flesh, which has not changed in 23 (or 2,300) years. No, it is cultural attitudes, already liberal in 1990, that have shifted further toward the libertarian perspective, which regards “sex workers” through a morally neutral lens as a fact of social life, a profession like any other, freely chosen by adults who know their own mind, and requiring nothing more than light regulation to curtail the spread of disease.

This happy-clappy view of prostitution has been persuasively marketed to the public through the slick rhetoric of theory-dependent pundits and by the selection bias behind those appearing in the media as representative of the trade: a tiny minority of articulate, self-possessed members of prostitution’s “high-track” — the canny, self-protective and strictly opportunistic 10% of the profession — whose earthy personalities and peppy, sorority-sister narratives project the benign image our credulous liberal elites wish to associate with “the life.”

Of course realists, front-line workers and those women who have managed to escape the soul-scarring degradation that marks the far more populated lower track of prostitutes have nothing but contempt for this fairy tale. They know that prostitution is quite unlike other professions women go into. Raptly supportive feminist activists, for example, were not forced into their professions as journalists or womens studies professors because they found themselves young, deracinated and isolated in a situation where there was no other choice for survival; nor are they constantly surrounded by thugs, criminals and drug dealers, or continually  threatened with violence as they rattle off their blog posts.  But that is the life of most prostitutes, so disgusted by what they do, they become drug addicts to numb the pain of their shame.

In her 2010 book, Souled Out, Tania Filloleau explains what prostitution is really like. And she should know, as she herself not only worked as a prostitute — an acrimonious custody battle left her broke and desperate — but eventually ran several brothels before reinventing herself as a dignified member of mainstream life. She says that as a player, she had money and power, but inside was one of “the walking dead.” Of the 500 prostitutes who worked for her, Filolleau says “not a single one ever said that she did not regret it.” Many of her former workers are homeless or hopelessly drug-addicted; some have been murdered or committed suicide.

The SCC decision will not help these women, but will further reduce their chances of breaking free of their “invisible chains” (the title of University of British Columbia law professor Benjamin Perrin’s enlightening 2010 book on human trafficking in Canada.) Indeed a 2012 comprehensive study of a cross-section of up to 150 countries revealed that legalizing prostitution increased sex trafficking.

No model is perfect when it comes to the sex trade, which will never be eradicated. Of course adults should have the right to privacy in their sexual affairs. There are men who are unable to form normative relationships with women. They have rights. One could argue that imprisoned men also should have the right to access to sex. But these are all sidebars to the main event. Which is that prostitution is harmful to girls and women.

Conservative Party MP Joy Smith champions a model in which the buyer of sex is targeted for penalty, not the seller. This is the paradigm in Norway and Sweden, which have seen significant declines in prostitution and sex trafficking. The Nordic model is triple-faceted: the criminalization of the purchase of sexual services; a national campaign to educate the public that the purchase of sexual services is harmful to women; and strong support services for those who seek to exit prostitution.

The takeaway here is that prostitutes are not, by and large, “happy hookers,” but victims. The politically correct refuse to judge their choice, but many prostitutes (to their credit) judge themselves. And as victims, what they *don’t* need is professed admiration for their alleged entrepreneurialism from those who would move heaven and earth to prevent their own daughters taking up such a life. What they do need is help to escape their bondage.