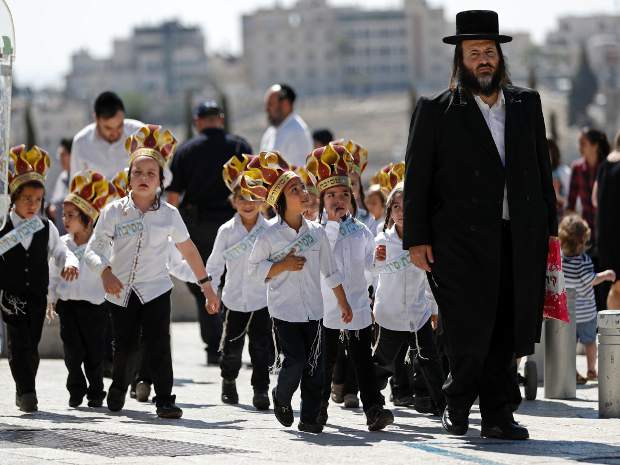 Barbara Kay: Thanks to proportional representation, Israeli Haredi children will not be learning math and science

Ultra-Orthodox Jewish children and their rabbi go the Western Wall to celebrate a prayer book ceremony in the Old City of Jerusalem on July 12.

To many Canadians critical of our “unfair” first-past-the-post voting system, proportional representation (PR) is the elusive pot of true-democracy gold at the end of the governance rainbow. But if they paid attention to Israel’s domestic politics, they’d find many cautionary tales.

Israel’s PR-elected government has a notorious history of making deals with small parties that hold the balance of power in its parliament, the Knesset. Consider, for example, the latest unappetizing policy hash the nation has been forced to swallow, thanks to a deal brokered between Prime Minister Benjamin Netanyahu and the ultra-Orthodox parties: in a political horse trade last week, the Netanyahu government agreed to roll back a 2013 decision that would have required Haredi elementary schools to add a desperately needed 11 hours a week of secular, core-curriculum studies — such as math, English and science — to their state-funded elementary schools. That promising initiative is now gone.

The fundamentalist, self-ghettoizing haredim represent only 12 per cent of the Israeli population. But, thanks to their high birthrate, there are more than 400,000 students in the ultra-Orthodox educational system — more than a third of all of Israel’s elementary-school population. Because of a promise made to them before Israel became a state by its founding prime minister, David Ben-Gurion, when the ultra-Orthodox were insignificantly few in number, the haredim have virtually full control over their schools’ educational content.

Their high schools, known as “yeshivas,” function very like Islamic madrassahs: boys are subjected to nonstop Talmud study and rote religious instruction, with grudgingly scant attention paid to a few secular subjects, if they’re lucky. As a result, young Haredi men are woefully ill-equipped to function in Israel’s famously high-tech society, and the numbers show it.

The disastrous government-enabled situation of the haredim can rightly be called scandalous. Their children are growing up under a suffocating 18th-century cultural bell jar. They are play-deprived — in the West, gross-motor activity is now considered a child’s right as a matter of health and physical literacy — and so culturally stunted by being deprived of such subjects as languages, art, literature, music and world history that they have no hope of appreciating, or fully integrating into, contemporary society.

Even those haredim who are considered the likeliest to succeed — that is, those who have self-selected for secular academic studies and graduate from university — don’t do particularly well in competition with other Israelis. Only about 1,000 haredi men and 5,000 haredi women (who don’t study Talmud and are expected to be the family breadwinners, in addition to mothering large broods so their husbands can study indefinitely) have high-tech jobs, but they are mostly at the low end of the pay scale. Ben-Gurion surely did not anticipate his politically expedient indulgence of Haredi demands to transmogrify into the social monster it is today.

It isn’t as if the haredim are in any way “authentic” guardians of Judaism. As I opined in a previous column, “The Modern Orthodox, who hold that distinction, are rational, civically integrated and pluralistic in outlook. Haredi Judaism is a fossilized historical aberration from Orthodoxy. It began as an anti-establishment spiritual movement, but petrified into a constellation of self-contained planets, each orb cultishly gripped in its own charismatic-leader worship, all dependent on, but resisting contact with authentic evolutionary Judaism.” Their embrace of a life bounded by endless (unproductive) study, and a dependence on welfare as a way of life, is unhealthy for them and for the nation.

The good news is that the stubborn Haredi leadership is increasingly finding itself fighting on two fronts: against the government and against its own young people. In the era of the Internet and smartphones, and considering the progress already made in slowly but surely dragging Haredi men into the army (a good number are actually quite willing to go), it has become increasingly difficult to shield Haredi youth from the outside world. But Haredi army service is not widespread yet, and won’t be enough when it is.

In 2013, Israeli Education Minister Shay Piron said of the decision to require the inclusion of the core curriculum that, “The State cannot fund something that goes against its interests.” Israel’s interests have not changed, but its policy just did. Winner: special interest group; loser: Israel. Behold the curse of proportional representation.