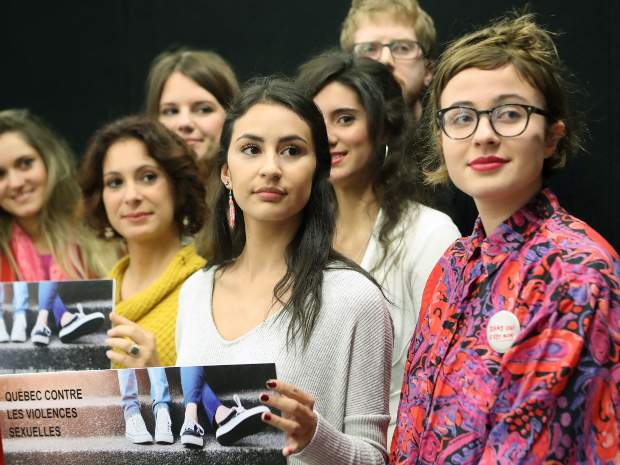 Barbara Kay: The allegations in Quebec; it’s not about what happened, but what can be proved to have happened

Last week, Quebec Liberal MNA Gerry Sklavounos was expelled from caucus when complaints of sexual assaults filed against him in March surfaced in the media. His accuser, Alice Paquet, can be named because she went public with her story on Facebook, at a vigil in support of sexual-assault victims and a Radio-Canada interview.

Paquet met Sklavounos, 41, at the age of 19 when she worked as a hostess at a Quebec City restaurant frequented by politicians. One night they drank together, then proceeded to his room upstairs, where, according to Paquet, non-consensual sex took place. Paquet told the interviewer she was initially amorous, but “a kiss isn’t a contract. It’s not because we embrace that it should lead to sex.” She is certain she did not say “yes,” but cannot recall if she said “no.”

The incident, Paquet said, left her physically and psychologically scarred. But the police investigation that she initiated she also chose to abort, because, she says, people close to her (although supportive) urged her to consider the consequences for Sklavounos: “He has children. He has a wife. He’s an MNA … ” But she has changed her mind: “(Is) his career worth more than what I lived through? That’s the question I asked myself, and … no (is the answer).” Sklavounos claims he is “completely innocent” and that he has “never, never in my life, sexually assaulted anyone.”

At first I felt instinctive sympathy for Paquet. Married politicians who cruise credulous young women are morally repugnant. In addition, that she had a rape kit done speaks to a sense of violation uncontaminated by time or external influences.

Then my sympathy turned into confusion: “Paquet told Radio-Canada she went to see Sklavounos again at his room a few weeks later and alleges she was again sexually assaulted.”

Do you remember the Seinfeld episode in 1997 where George is agitated because his girlfriend Marcy always tells the beginning and end of a story but substitutes “yada yada yada” for the middle, as if what happened between Point A and Point C were too trivial to bother detailing? When George finally presses her on one story, though, the unpacked yada yada yada reveals that Marcy is a shoplifter.

There’s nothing funny about sexual assault, of course, but the yada yada yada framework is still interesting here. The term has moved beyond comedy into full cultural meme status. Yada yada yada is now a signifier for linguistic placeholders — Point B — in social narrative. Sometimes the placeholder elides the obvious, the predictable or the trivial. But sometimes it elides crucial information to forming a judgment.

The Sklavounos-Paquet story, a case in point, begins with solid establishing detail: we have Paquet, a young and impressionable woman, perhaps rather dazzled by the older Sklavounos’s public profile, flattered by his attention. He is doubtless a beau parleur (smooth talker). They have a drink. Attraction turns to desire. They go to his room. They smooch. Then, yada yada yada, she’s getting a rape kit done and pondering a criminal charge. There’s continuity of theme between Point A and Point C, the gist of Point B being quite accessible to the imagination (and a plausible enough allegation to warrant investigation).

We have heard a lot recently about the trauma carried by survivors of sexual assault, and how there’s no right way to process that trauma. Every victim responds differently, including, tragically, ways that can be self-destructive. That’s very true. But courts of law can only deal in evidence, and in cases of sexual assault, the only evidence is often derived from competing testimonies. It’s not about what happened, but what can be proven to have happened. I don’t know what happened in that room, on either occasion, but I (and many others) certainly doubt whether any conviction would be possible in these circumstances.

Yet in an open letter published Monday, Paquet expressed surprise at the public’s demand for clarifying details to round out her version of events — which is what all her hopes for a success at a criminal trial would hinge on.

As we learned through the Jian Ghomeshi trial, witnesses testifying for the Crown saw no inherent contradiction between their allegations of assault against Ghomeshi and their subsequent efforts to keep his affection for them alive. To their chagrin, the judge did not agree. Whether Sklavounos is guilty or not, before taking the judiciary plunge, Alice Paquet may wish to recall that a court of law will have questions that a supportive crowd of well-wishers won’t.