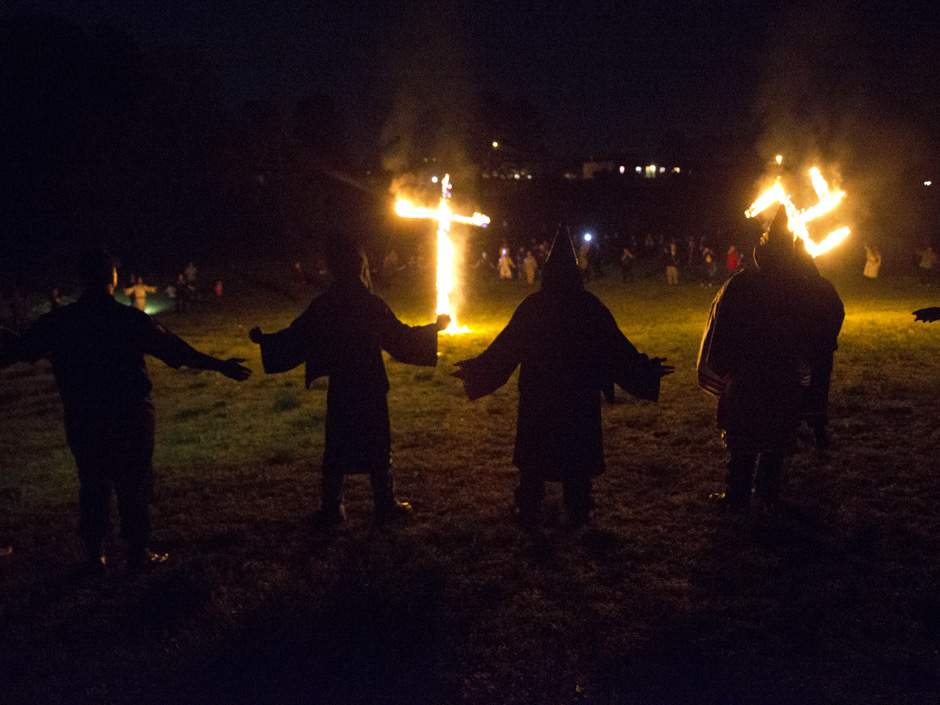 Barbara Kay: The deplorables’ get their moment. Break out the pointed hoods

Today, the KKK dreams of restoring itself to what it once was: An invisible empire spreading its tentacles throughout society.

An old New Yorker cartoon sprang to mind in the days following the U.S. election. In it, rain pours down in sheets. Two frowning children inside a car parked roadside are peering out at their sodden, frustrated father who is struggling to change a tire. The caption reads: “I can’t change the channel. This is real life.”

The shock of Donald Trump winning has discombobulated progressives. Their parade has been rained on — bigly — and they would very much like to change the channel back to the warm, dry and bump-free ride to the glass ceiling-shattering electoral destination they feel owed.

In acts of utter futility, anti-Trumpists around the U.S. (and Toronto) took to the streets, with thousands of New Yorkers converging on Trump Tower, and thousands of Los Angelenos swarming downtown, holding signs featuring the F-word and chanting allusions to Trump’s small, ah, hands. Mostly the protests have been orderly, with here and there broken windows, burning garbage pails, smashed cars and even a shooting in Portland, Ore.

Now it is the turn of the “deplorables.” According to a post on a North Carolina website, a chapter of the Ku Klux Klan, the Loyal white Knights, is planning to hold a parade Dec. 3, but with no specified time or place — only the white-supremacist message “TRUMP = TRUMP’S RACE UNITED MY PEOPLE.” This isn’t the first time the KKK has endorsed Trump, but it is the first time since the election. The optics of a president-elect being hailed as a conqueror by America’s undisputed scum of the earth is indeed deplorable — like a very bad cartoon. But it jogged my memory.

Trump couldn’t choose his supporters, but he could have stomped on the cockroaches

Students of left-wing radicalism in the U.S. will remember political guru Saul Alinksy (1909-72), the U.S. version of Machiavelli. Alinsky wrote the book Rules for Radicals, a how-to manual for revolutionaries, which emphasized strategies of deception rather than open confrontation as the best way to advance a Marxist revolution in the U.S. Don’t sell your agenda as socialism, he urged, sell it as “progressivism” and “social justice.”

Alinsky’s strategy was to work within the system while accruing the power to destroy it. Many of the student radicals who went on to influential political careers were well-versed Alinsky acolytes. In fact, in 1969, a certain Wellesley College student named Hillary Rodham wrote an admiring 92-page senior thesis on Alinsky, likening him in cultural stature to Walt Whitman and Martin Luther King Jr. Barack Obama, needless to say, was a big fan (so was Canadian Dene politician George Erasmus), and followed his rules when he worked for ACORN as a community organizer.

In his biography of Alinksy, Let Them Call Me Rebel, Sanford Horwitt recounts the following anecdote — the one I was reminded of by the announcement of the KKK parade — that perfectly encapsulated the Alinsky modus operandi.

In 1972, some college students at Tulane University sought Alinksy’s help in planning a protest of a speech by George H.W. Bush in defence of the Nixon administration’s Vietnam War policy. They said they planned to picket the event. Alinsky said that was an ineffective approach and might get them suspended. Instead, he suggested they attend dressed up as members of the KKK, and whenever Bush said something to defend the war, they should cheer and wave placards reading “The KKK supports Bush.” According to Horwitt, “this is what the students did with very successful, attention-getting results.”

Those phony KKK students were able to create an unfair visual association between Nixon and the dregs of humanity. Now, the real dregs of humanity are bruiting an affinity with Trump. How clever (if unethical) Alinsky was, and how beyond effing stupid is the KKK. The Tulane students made a merely flawed Nixon look evil (one might reasonably argue Nixon was considerably less flawed than Hillary Clinton); today the KKK, apparently seeking to make Trump look heroic, will achieve nothing other than embarrassment — not for Trump, who is impervious to embarrassment, but for Trump’s many decent supporters — and offer Clinton supporters what looks like proof, if it were needed, that the president-elect really is a racist degenerate, and worse.

Trump has nobody to blame for this coming fiasco but himself. While it is true that no candidate can pick and choose the kind of people who support him, he can certainly distance himself from the haters and cretins. He had the opportunity to do exactly that when the cockroaches came out of the wall during his campaign, and he failed to stomp all over them and everything they stand for. That was a yuge mistake, and partly because of it, instead of these transition months being a time for binding up wounds, the bleeding will continue. Not an auspicious beginning, to say the least.