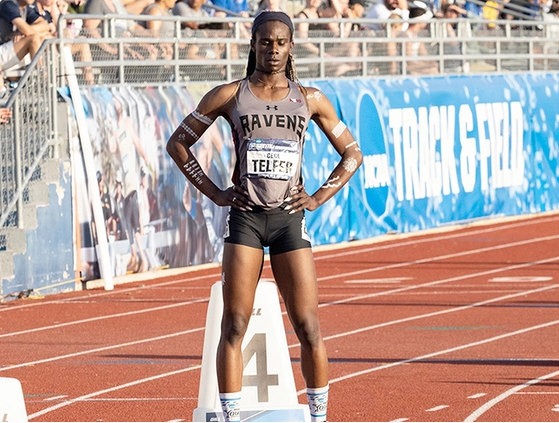 CeCe Telfer prepares herself for the women’s 400-metre hurdles at the Division II track and field championships last May in Kingsville, Texas. Telfer competed for three years on the Franklin Pierce University's men’s track and field team before medically transitioning and joining the women’s team for the 2018-19 indoor and outdoor seasons. Photo by NVAA

Athletes who are genetically male are, on average, 40 per cent heavier, 15 per cent faster and 25-50 per cent stronger than those born female

Reverence for sport’s first principle — fair play — unites people across the globe. Hell hath no fury like sport enthusiasts witnessing systemic cheating. Speaking of which: That burning smell? It’s the rubber of gender theory hitting the road of biological reality, as the consequences of broadening gender “inclusion” policies in sport achieve visible effect on our playing fields and medals podiums.

Since 2015, the IOC has allowed biological males who have self-identified as female for a year to compete in women’s sport, if they reduce their testosterone levels to 10 nmol/l (nanomoles per litre). That‘s still much higher than the female testosterone range of .54 to 2.4 nmol/l. In any case, testosterone is only one factor in the male athletic advantage — and not, as I explain below, the most significant one by any means.

On Oct. 16, in resolution of a civil rights claim levelled by Concerned Women for America against Franklin Pierce University in New Hampshire, the U.S. Department of Education’s Office for Civil Rights agreed that FPU’s transgender sports and inclusion policy violated Title IX, which prohibits discrimination in educational programs and activities, including athletics, on the basis of sex. FPU has agreed to “rescind its Transgender Participation and Inclusion Policy and will cease any and all practices related thereto.”

Testosterone is only one factor in the male athletic advantage

The complaint centred on trans athlete CeCe Telfer. Telfer had competed in the 400m hurdles on the men’s team in 2016 and 2017, ranking 390th in NCAA Division 2. In 2018, the athlete started self-identifying as a woman. Then eligible to compete against women according to NCAA rules, Telfer won the women’s national championship in June 2020. Telfer’s coach, Zach Emerson, ascribed the extraordinary improvement to attitude: “I’ve never met anyone as strong as her mentally in my life.”

Mental attitude is now the fallback “explanation” when genetically male athletes leap from low or average achievement in men’s sport to stunning success in the women’s category. Such a fiction insults those female athletes brimming with mental toughness that Telfer sails past in competition. A female athlete’s attitude, however magnificent, is insufficient to overcome inherent male advantages of superior strength, lung capacity and muscle mass.

Some sport professionals toe the official nothing-to-see-here line, but with a wink to indicate the performative nature of their commentary. U.K. trans rugby player Kelly Morgan, six feet tall, once folded an opponent “like a deck chair,” according to her club captain. The team founder jokingly told a BBC interviewer: “She’s going to be a good, good player for the next few years, as long as we can stop her injuring players in training.”

Morgan once folded an opponent 'like a deck chair,' according to her club captain

But injuries to women athletes by genetically male competitors are no laughing matter. Last February, World Rugby held meetings to investigate the harms women in contact sports are vulnerable to under current inclusion rules. This was the first sport association to bring together experts in biology, sociology and kinesiology with a view to updating eligibility standards. The consultation was reportedly respectful and thorough, with both sides of the inclusion debate represented.

Relying on data published by Sweden’s pre-eminent Karolinska Institute of medical academic research, they concluded that even when following IOC hormone-reduction guidelines, genetically male athletes are, on average, 40 per cent heavier, 15 per cent faster, 30 per cent more powerful and 25-50 per cent stronger than female athletes. These spreads are enormous, considering the minuscule measures of time, distance or weight that distinguish gold from silver, silver from bronze. (Ironically, doping “only” confers an advantage of nine to 12 per cent.)

It should therefore come as no surprise that injury to female athletes increases by 30 per cent when genetically male competitors enter the sport. On Oct. 9, the World Rugby Council issued a new resolution on transgender participation: “Transgender women may not play women’s rugby.” This statement marks the first time a sport federation has broken ranks with the IOC on this issue.

Rugby Canada’s response was, disappointingly, to state that the new World Rugby guidelines “are not policy that can or will be adopted.” Instead, it doubled down on commitment to its own Trans Inclusion Policy, which declares that players “should be able to participate as the gender with which they identify and not be subject to requirements for disclosure of personal information beyond those required of cisgender athletes. Nor should there be any requirement for hormonal therapy or surgery.” In other words, anyone is eligible for entry into women’s rugby without preconditions of any kind but the statement, “I identify as female.”

Amongst youth aged five to 19, ice hockey, rugby and ringette are the riskiest for brain injuries, accounting for 27 to 44 per cent of all injuries incurred during play. But the only sentence containing the word “safe” in Rugby Canada’s guidelines references hurt feelings when “gender identity and gender expression” aren’t respected.

In fact, even in non-contact sports, female athletes competing against genetically male athletes do not feel safe. Last February, three female Connecticut high school runners launched a federal Title IX lawsuit because, over three competitive seasons from 2017 to 2019, two genetically male athletes scooped gold and silver in 15 women’s state championship titles. A minimum of 85 female athletes are estimated to have thereby lost out on opportunities for advancement. The girls’ witness impact statements are peppered with words like “stress,” “anxiety,” “depression” and the like.

The 1988 Seoul Olympics doping scandal, which eventually stripped Canadian runner Ben Johnson of his gold medal in the 100m sprint, prompted the creation of the Canadian Centre for Ethics in Sport (CCES) in 2003. Its job was to ensure that systemic cheating in sport would never again be tolerated. So the “fair play” buck stops with them.

Alas, the negative fallout from the CCES’s decision, amplified in its 2016 guidelines, to sacrifice the principle of fair play for female athletes on the altar of gender “expression” constitutes a tawdry tale of mission betrayal. But that is a column in itself for another day.