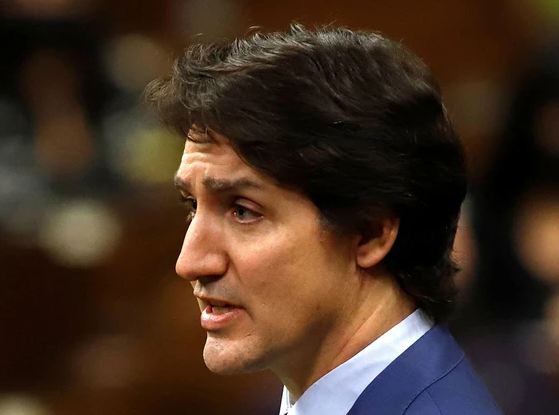 Prime Minister Justin Trudeau speaks in the House of Commons about the invocation of the Emergencies Act to end the truckers' protest in Ottawa, on Feb. 17, 2022. Photo by Patrick Doyle / Reuters

Barbara Kay: Trudeau's hypocrisy regarding foreign funding should be evident to all

When it was foreign donations to the 'right' kind of cause, the Liberals were sanguine about U.S. money pouring in

The Freedom Convoy has galvanized the world’s attention, and generally not in a good way.

One American commentator observed that even amongst Canadians famed for “niceness,” truly absurd restrictions on freedom will create pushback.

He saw a pivotal symbolic moment in the refusal of citizens to obey the ban on taking fuel and other supplies to the truckers in the face of a police crackdown, describing it as perhaps “the greatest act of civil disobedience in (Canadian) history.”

That American bystander is on to something. Justin Trudeau has been embarrassed in the full glare of the international spotlight, caught in the act of being dissed by anti-progressive nobodies, the allies of a “fringe” group of deplorables. They made him look weak and indecisive, the worst thing for a leader with a tenuous grasp on power and an obsession with image.

It was time to stay home or go big. He had already kept himself aloof too long. Instead of bestowing hands-on attention to defuse the tension, he sequestered himself in his palace to brood on the lèse-majesté of these booboisie proles. Finally he chose to go big with the Emergencies Act. Way too big in the view of legal and civil-rights experts.

Trudeau’s gamble may pay off for now because, according to a Maru poll, a decisive majority of Canadians — 71 per cent — want a “strong-willed person” to impose order on the chaos. They seem to believe Trudeau is embracing the Emergencies Act for its added physical muscle.

They are deceived. It’s about the financial muscle the act brings. As Deputy Prime Minister Chrystia Freeland tweeted on Feb. 14, the day of the Emergencies Act announcement, “This is about following the money. This is about stopping the financing of these illegal blockades.”

It’s the arrant hypocrisy of the Trudeau regime that rankles. Trudeau and Freeland say that foreign donations are “a threat to our democratic institutions, to our economy and to peace, order and good government to Canada.” What they mean is that foreign donations from the wrong sort of people (cretinous pro-Trumpers) to the wrong sort of cause (those we disagree with) offend us, and we will stop them.

It's the arrant hypocrisy of the Trudeau regime that rankles

When it was the right sort of foreign donations to the right kind of cause — donations that helped the Liberals in the October 2015 federal election, for example — the Liberals were sanguine about U.S. money pouring in, even though the donations appeared to be in contravention of the Canada Elections Act. A report by a registered society called Canada Decides concluded that “the 2015 election was skewed by money from wealthy foreigners.”

Another “right sort” of foreign donors are anti-fossil fuels activists, in particular the deeply controversial and notoriously anti-oil Tides Foundation. An inquiry into the scale of foreign funds aimed at damaging Alberta’s oil and gas industry, launched by Alberta Premier Jason Kenney’s government, issued a report last October that found foreign donors had provided nearly $1.3 billion for environmental campaigns between 2003 and 2019.

Of that total, the report found that $54.1 million in foreign funds, representing 21 groups, were targeted specifically at “anti-Alberta resource development activity.” In an interview, Alberta Energy Minister Sonya Savage said, “We have a right to be outraged.”

They sure do, but, as the report’s presiding accountant, Steve Allan, conceded, “No individual or organization, in my view, has done anything illegal. Indeed, they have exercised their rights of free speech.”

Compare Mr. Allan’s honourable perspective to that expressed in an interview of Justice Minister David Lametti by CTV Power Play host Evan Solomon on Feb. 17 regarding the effects of the Emergencies Act on individual donors to the convoy. Solomon put the question: “’A lot of folks said, ‘I just don’t like your vaccine mandates and I donated to this, now it’s illegal, should I be worried that the bank can freeze my account?’”

Lametti complacently (some might say eagerly) answered that yes, some donors’ accounts would be targeted: “If you are a member of a pro-Trump movement, who’s donating hundreds of thousands of dollars and millions of dollars to this kind of thing, then you ought to be (worried).” (Note: There’s nothing to stop them from reducing the triggering amount.)

Lametti’s unbounded contempt for the protesters and their supporters is encapsulated in his reference to the “pro-Trump movement.” For Trudeau and his entourage, the words “pro-Trump” and “white supremacist” are likely complementary, if not interchangeable.

Speaking of Trump, Trudeau’s hypocrisy on foreign political influences doesn’t stop at double standards on funding. I am trying very hard to imagine the reaction of Trudeau and his apparatchiks to a Conservative party leader seeking endorsement from any former U.S. president, let alone Donald Trump, during an election campaign. The Liberals’ fainting couches for recovery from the shock of such blatant foreign interference would surely be in high demand.

And yet Trudeau had no such concerns when, barely holding his own in the polls, and with everything at stake, he welcomed Barack Obama’s intervention, just days ahead of the 2019 election. “I was proud to work with Justin Trudeau as president,” tweeted Obama. “He’s a hard-working, effective leader who takes on big issues like climate change.” In a further oleaginous nudge, Obama wrote, “The world needs his progressive leadership now, and I hope our neighbors to the north support him for another term.”

Trudeau’s famous “sunny ways” of yesteryear were always political theatre. The real Trudeau we see now is drawn to “steely ways” that slice through the time-consuming messiness of democracy to achieve his ends. If, to regain control, that means treating protesters as though they were terrorists, so be it.

Over-actions usually beget over-reactions. Between his arrogance and his hypocrisy, Trudeau does not understand that far from ending a melodrama, as he intended, the Emergencies Act may only have signalled an intermission in a tragedy whose next act has yet to be written.