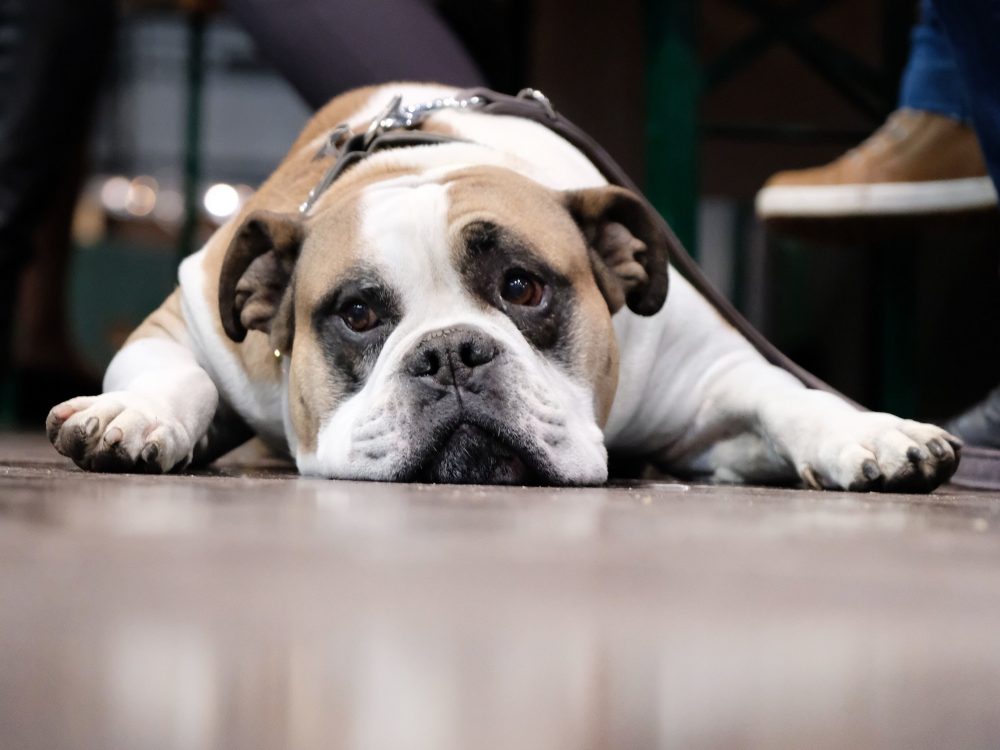 Barbara Kay: What are dogs for? To be waited upon by their humans, of course

Dogs: Far from expecting them to serve us, we find ourselves more and more eager to serve them.

It startled me to learn last week that Christie Blatchford’s beloved English bull terrier, Obie, had died at a ripe old age. Seems but a few years ago she informed readers of his acquisition as a pup.

Christie says Obie was “my one,” made for her, as she was for him. It’s tough to lose a cherished companion but, given our hugely disparate life spans, dog lovers must accept serial bereavement as the price of our unique cross-species covenant. Most of us love and part with a succession of dogs over our lifetimes.

Another reality is that some dogs are more precious in memory than others. But the best should never be the enemy of the good in these matters. So I hope in time Christie will find herself able to envision a new canine chapter in her life, for her own sake and for the sake of some very lucky dog.

Last May, we too had to say goodbye to a dog. Our yellow lab Polo was not our “one,” but he was of course loved all the same. (Our “one” was a predecessor, Harley, a gorgeous black lab with a beautiful temperament.) Towards spring, it became clear that elderly Polo had gone from merely stiff and arthritic to some form of neuro-degeneration. Labs are passionate about food. On the day I poured out his kibble and he seemed conflicted as to whether eating was motivation enough to put himself through the discomfort of rising and walking to his bowl, I took it as a clear signal. The vet agreed it was time.

Another reality is that some dogs are more precious in memory than others. But the best should never be the enemy of the good in these matters

Dogs and humans have enjoyed a long, collaborative history together, for most of it a simple quid-pro-quo arrangement. Dogs performed guard duty; humans fed them scraps. Thousands of years later, humans got the bright idea that selective breeding could produce a specialized canine workforce, providing efficient labour in herding, pulling, tracking and retrieving (and for the ladies, lapsitting).

This worked out so well that humans began to see dogs as reflections of their own social status. As John Homans observes in his 2012 book, What’s a Dog For?, in the days of empire, England’s upper classes took to equating their dogs’ breeding with their own superior status amongst the nations, viewing canine “mongrels” as an objective correlative to the classes and races they considered ill-bred or inferior. This trend found its ultimate expression in purity-obsessed kennel clubs and dog shows, which Homans says were, by the 1870s, a “national craze.”

There are still pockets of dog owners today for whom dogs’ primary value resides in their usefulness, and others, hardly aristocrats, obsessed with perfection of form, but most of us today just like dogs because they’re … them. Far from expecting them to serve us, we find ourselves more and more eager to serve them. The Labrador Retriever is the most popular breed in North America, but 99 per cent of retrievers don’t exhaust themselves in fetching birds from icy water all day; they retrieve frisbees and sticks, and stop at their own pleasure. They’re companions. Friends. Many dog people consider them family members. (The popular Jacquie Lawson e-card company has just announced a new line of dog-passing sympathy cards.) They’re the focus of innumerable welfare and rights organizations. The scale of emotional investment made in dogs today would have had our ancestors scratching their heads in disbelief.

While we have always had labs, I see a new canine breed trend unfolding in my children’s dog choices. Both of them have acquired “doodles.” My daughter’s family has a “goldendoodle,” a golden retriever-poodle hybrid, and my son’s family has a “cockapoo,” a cocker spaniel-poodle hybrid, which was the first of the doodle designs decades ago.

Doodles are suddenly everywhere. Clearly there is something magical about the poodle because no matter what breed you pair it with, it produces a dog that is adorable, sweet-natured, playful or self-effacing on demand, and desperately approval-seeking. A kind of canine Stepford Wife. Or — especially when they are just home from the grooming salon — eerily Stuffi-like.

My generation of dog lovers fondly remembers Lassie, the famous collie who traversed hundreds of miles, surviving on her wits, to “come home.” Heroic acts of search and rescue were her specialty. I somehow can’t imagine a “colliedoodle” in the role. The dogs we admired were bred to work, even if we didn’t ask them to; doodles are bred strictly for cuteness.

There will be no more dogs for us. Our indoor Ragdoll cat Simba will have to suffice. Cats do not of course offer anything like the proactive affection of dogs, but they also do not have to be walked five times a day in minus-20 degree Montreal winters. If only poodles could be crossed with cats to produce non-allergenic, graceful and affectionate “kittypoos” that come when called, but take naturally to litter boxes, I might reconsider.