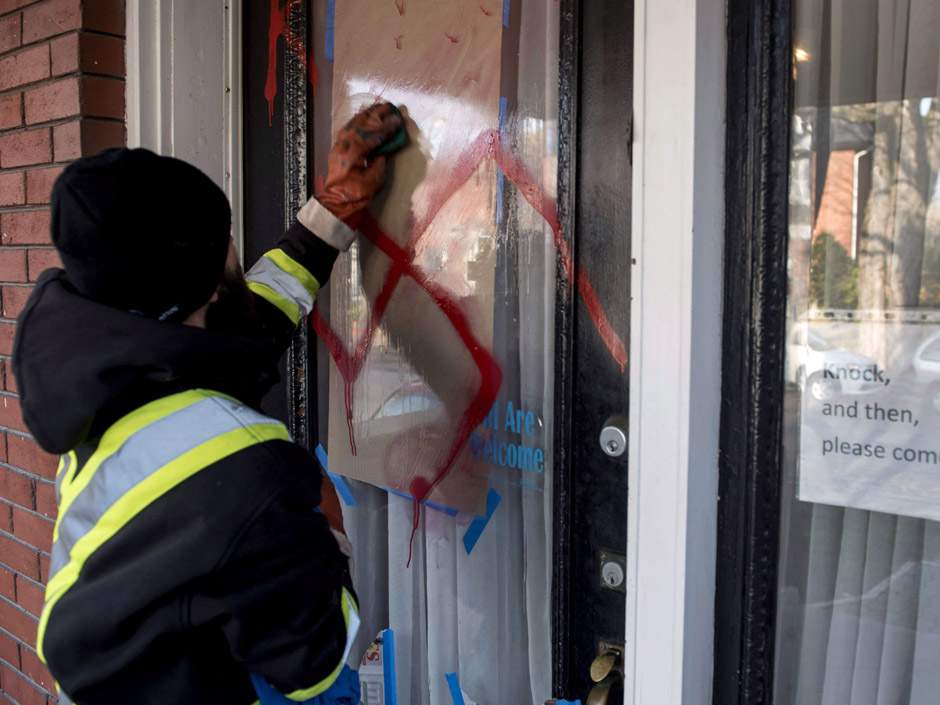 Barbara Kay: When reaching out to the Muslim community, choose your ambassadors carefully

A graffiti removal worker cleans anti-Semitic graffiti, including a swastika, that was spray painted on the door of The Glebe Minyan and home of Rabbi Anna Maranta, on Tuesday, Nov. 15, 2016 in Ottawa

Crime Prevention Ottawa (CPO) was founded in 2004 to develop strategies for enhancing community safety, addressing problems like violence against women, neighbourhood gangs, abuse of the disabled and hate crimes.

Between January and November of this year, according to Staff Sergeant Dave Zackrias of the Diversity and Race Relations Unit (DRR) of the Ottawa Police Service (OPS), there have been 64 reported hate incidents targeting blacks, LGBT, Jews and Muslims. The majority were “mischief,” mostly graffiti of offensive words and symbols, or “harassment,” shouted or Internet hate speech. Notably, there were very few reports of two or more people engaging in a verbal confrontation. There were two cases of physical assault. Altogether hate crimes constituted a virtually violence-free 0.02 per cent of all Ottawa police-reported crimes.

To an epidemiologist these figures would indicate a basically healthy and inclusive society. And yet, in spite of their proportionately low numbers, of the four public events CPO mounted in 2016, two have been dedicated to hate crimes, with both, unfortunately, featuring a failure of due diligence regarding Muslim representation.

On June 15, CPO organized a public education program, “Why Faith-Based Crime Prevention Matters,” with a panel of two Christians and one Muslim. No Jewish representation, even though Jews, one third as numerous as Muslims in Canada, are eight times more likely to be targets of faith-related hate than Muslims.

The Muslim panelist was Imam Zijad Delic, a poor choice. Delic’s scheduled 2010 appearance at the Department of National Defence for an Islamic-related event was cancelled by the Harper government owing to his Islamist affiliations. As Quebec helmsman of the Canadian Islamic Congress (CIC), Delic tendered a 2007 Montreal speaking invitation to notorious Taliban apologist Yvonne Ridley (I was there; she boasted of her collaboration with Hezbollah). Delic also provided leadership to the CIC’s shariah lobby, as well as supporting the Organization of Islamic Conference’s speech-chilling “blasphemy” initiative to criminalize criticism of Islam.

In the CPO’s first mass mailing Nov. 10 regarding their second event last Friday, “Addressing Hate Crimes: Creating a Safe City for All,” there was no Jewish representation noted, only black, LGBT and Muslim, the latter in the person of Amira Elghawaby, communications director of NCCM/CAIR.CAN. I use both her organization’s old and new acronyms together to remind readers that the National Council of Canadian Muslims is a 2013 cosmetic name change only; NCCM appears still intimately bound up with U.S. Islamist organization CAIR, linked by the FBI to the Muslim Brotherhood-created Hamas support network in the U.S., and considered unsuitable by them as “an appropriate liaison partner” for any government outreach.

CPO’s next mailing, Nov. 17, included panelist Bernie Farber, a former Jewish community spokesperson. (On Nov. 19, I submitted a media query to CPO concerning the temporal hiatus, after which Farber was suddenly elevated to keynote status.)

Now B’nai Brith is the organization that normally deals with Jewish hate crimes. And according to CEO Michael Mostyn, “It’s a disappointing and puzzling decision for Ottawa to partner with NCCM (formerly known as CAIR-Canada) on this event, given that their colleagues in other law-enforcement agencies such as the RCMP and Durham police have distanced themselves from the group in the past … There are certainly less controversial organizations that the Ottawa police can choose to partner with at these sorts of events.”

Last week’s panel also caught the attention of Syed Raza of the Council for Muslims Facing Tomorrow (MFT), a group with no Islamist baggage — quite the contrary; it denounces political Islam and promotes Islamic reform to meet contemporary rights standards — which would make an ideal partner for collaboration with any tax-funded agency. Raza is quoted in an article critical of the CPO event by the Investigative Project on Terrorism’s IPT News: “We find (NCCM/CAIR.CAN’s) activities at best shady and misleading for the Muslim population of Canada.”

But, Raza added, Crime Prevention Ottawa and Ottawa police show little interest in opening their outreach to more diverse Muslim views, so cozily entwined are they with NCCM/CAIR.CAN. CPO, for example, consists of only three people, one of whom, Sharmaarke Abdullahi, according to his bio on the Canadian Arab Institute site, has previously worked with the NCCM.

Cultural groups can derive legitimacy and moral authority from association with law enforcement agencies and community safety organizations, who should therefore be highly selective in their choice of partnerships. NCCM/CAIR.CAN has a history of threatening legal action against those who level charges of worrisome connections against them. Elghawaby confirmed to me that her group is still engaged in a libel suit against Stephen Harper’s communications director for publicly implying NCCM/CAIR.CAN has ties to Hamas. Unless and until NCCM/CAIR.CAN makes full public disclosure of the evidentiary materials in that case, CPO should avoid collaborating with any advocacy or other groups encumbered with an ambiguous history and associations.