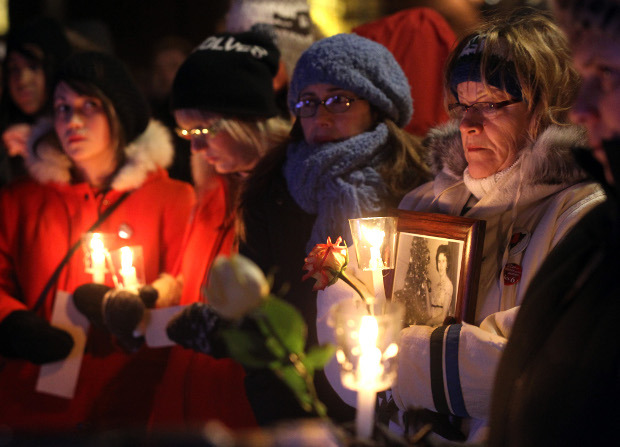 A 2010 vigil for the loss of lives during the 1989 Ecole Polytechnique massacre in Montreal.

The Amish grieved their losses and moved on with their lives. By contrast, here in Canada, ideologues produced a “violence against women” industry that has become increasingly mired in what Kay describes partially as “political tribal fury against men.”

How right he is. The anniversary of the Montreal Massacre is to the violence-against-women industry what the Superbowl is to cars and Pepsi. Instead of actual products, though, women’s advocacy groups are selling emotions to women: in particular, the emotions of fear and hatred. For example, in the video above , produced in July, and now making the rounds, is the 2012 rollout of the Canadian Women’s Federation contribution to the fear-and-hatred campaign.

It opens with a charming scene of an “It’s a girl” baby shower in progress. A circle of women, young and old, are drinking tea and enjoying themselves. A prettily wrapped gift is passed to the mother-to-be. The camera focuses on her happy face. She opens it and holds up a black strap with an object at the end of it. Her anticipatory smile dies down and is replaced by a puzzled look.

“What is it?” someone asks. The camera zooms in on the gift-giver, an older woman, whose smile fades as she solemnly responds, “It’s a rape whistle.” The merry chatter dies down. The mother-to-be furrows her brow in sombre contemplation of her daughter’s grim future. A young girl peering at the rape whistle smiles innocently, clearly ignorant of the gift’s implication. On the screen we see the stark statement: “1 in 2 girls will be physically or sexually abused.” What? The Canadian Women’s Federation is saying that 50% of women will be the victim of an attempted or real rape? Well no, that was not their statement…exactly. But the visual of the rape whistle packs a punch and not by accident gives that exact impression.

Let’s revisit the actual statement that 50% of women are at risk of physical or sexual abuse [by men]. On the Canadian Women’s Federation website, they say that their 50% figure comes from “The Violence Against Women Survey” by Statistics Canada in 1993. There are two things wrong with this source. One is that it is almost 20 years old. Since then sexual assault has gone down by 69% and physical abuse by 20%. The other thing wrong with this source is that it is not a study of actual abuse, but a survey of women’s own perceptions of abuse. In other words, it is basically an opinion poll, and might have included questions like, “Have you ever had sex with someone after they gave you alcohol?” or “Has your partner ever yelled at you in anger?” An answer of “yes” to these and other such vague and leading questions will put a woman “statistically” amongst those considered at risk of “abuse.”

Surveys about perceptions are not science. As any expert in intimate partner violence will tell you, real physical abuse between intimate partners – both heterosexual and homosexual (lesbian inter-partner violence rates are higher than heterosexual) – is mostly bilateral. The actual intimate partner violence victimization rates for domestic violence in 2011 are 18.8% for women, and 19.8% for men. In other words, about one in five women will suffer abuse at the hands of men, and about one in five men will suffer abuse at the hands of women. And by abuse I do not mean rape: I mean everything from psychological control (bilateral) to pushing and shoving,  up to flinging objects and knifings, which men and women do to each other in equal numbers. Most women will not be subject to rape or attempted rape in their lifetime.

About 67 women a year are killed by their intimate partners; so are about 40 men a year. In a nation of 35 million people, this figure is not indicative of an alarming or widespread social pathology.

But that is not the message the Canadian Women’s Federation is spreading with this meretricious video. This ad promotes needlessly elevated fear for their safety amongst women and, more reprehensibly, promotes hatred of men as a group. Watch the video, “dislike” it, as I did, and tell them why.