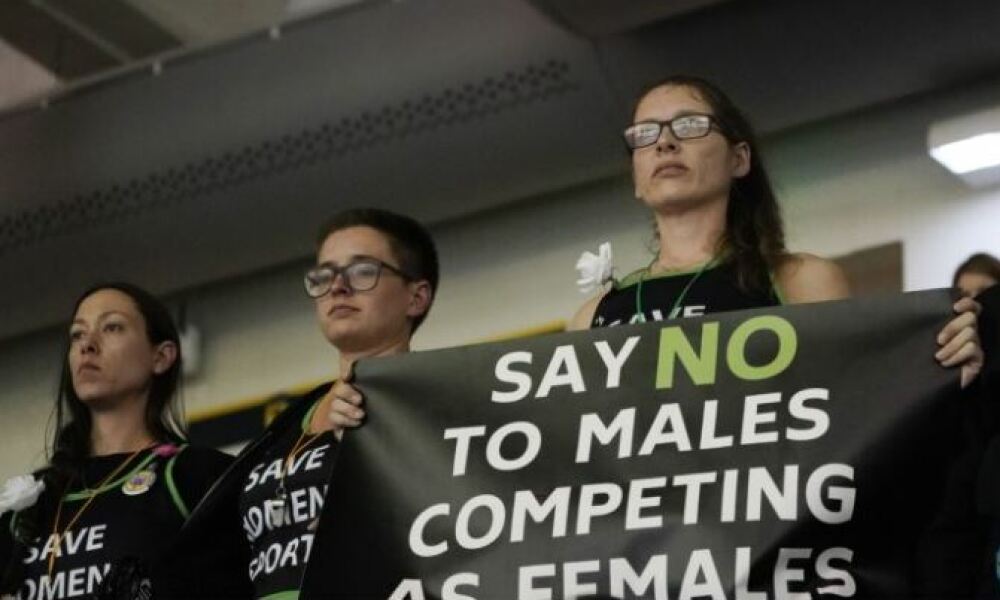 Women protest at the NCAA swimming and diving championships at Georgia Tech in Atlanta, Ga., on March 18, 2022. (AP Photo/John Bazemore)

As a response to our national embarrassment around the doping scandals of the 1980s, the Canadian Centre for Ethics in Sport (CCES) was established to ensure that cheating in sport would never recur. For two decades, CCES concentrated on its primary function: keeping banned substances out of sport. Then its leadership went woke, and CCES became a full-time advocacy group for male athletes who identify as women, relentlessly promoting their right to compete against women.

In 2016, CCES released a policy guideline paper for athletic organizations on trans inclusion in sport, written by an “expert working group” that included trans activists, but no biologist or female athletes. Not only did CCES recommend self-ID as the sole criterion for divisional eligibility—which wouldn’t impact men’s sport but would be devastating to women’s—the report recommended that athletes be permitted to shift gender self-identification from season to season, or from one sport to another. In spite of the guidelines’ rhetorical infelicities and lack of academic rigour, most Canadian sporting associations adopted the guidelines without demur.

CCES has just published “Transgender Women Athletes and Elite Sport: A Scientific Review,” a commission assigned to the radically ideological group, E-Alliance. How radical? The writers’ research included consultation with transwomen athletes, but not female athletes. In fact, E-Alliance is so biased, their directors are signatories by a U.S. activist group that pressured Sport Canada to close down a survey of female athletes’ perspectives.

The review’s conclusion, that “[t]here is no firm basis available in evidence to indicate that trans women have a consistent and measurable overall performance benefit after 12 months of testosterone suppression,” sparked immediate incredulity in the small but well-informed Twitterverse devoted to this topic.

Dr. Jon Pike, who specializes in the ethics of trans athletes in sport, tweeted: “[T]his review is unsound, and full of egregious errors … it is, in places, simply ignorant of the argument and the science. It routinely insults rather than argues.” High-performance coach and president of Athletics Alberta, Linda Blade, is the principal author of the 2021 book, “Unsporting: How trans activism and science denial are destroying sport.” (I am co-author.) She poured scorn on the review as well, tweeting, “The latest pseudo-science #claptrap from @EthicsInSPORT has been heartening in two ways: 1. A lot more #sports colleagues from around the world are now calling out the [farce]. 2. The #CCES put all its “cards” (arguments) on the table, exposing its ineptitude for all to see. #Evidence.”

The review states the findings “result from an analysis and synthesis of the existing literature.” That’s not true, Blade wrote in response to my request for comment. They cherry-picked what accorded with their thesis. Blade could have added that “Unsporting” forms part of the official literature CCES is supposed to consult, and it is choc-a-block with references to peer-reviewed studies that entirely refute the review’s findings.

Moreover—unconscionable for a Canadian institution claiming to stand for fairness, and to have surveyed the relevant literature—the reviewers snubbed the major 2021 Canadian Macdonald-Laurier report, “Fair Game: Biology, fairness and transgender athletes in women’s sport,” written by the above-mentioned Dr. Jon Pike, along with Dr. Emma Hilton, a developmental biologist specializing in fairness in women’s sports, and Dr. Leslie Howe, professor of philosophy with a niche research interest in sport.

“Fair Game” provides reams of data demonstrating that testosterone is but one of many factors—and not the most important—in the male post-puberty advantage, which endures even when testosterone is suppressed. Indeed, the proven male musculoskeletal advantage is sometimes shockingly elevated: performance differences between women and natal males range from 11 percent in swimming to 120 percent in rugby. Illegal doping, by contrast, confers less than a 10 percent advantage.

One of E-Alliance’s hypotheses is that if you adjust for height and fat-free mass, “relative differences in strength between cis men and cis women largely disappear.” Nonsense, says Blade. Take two groups of athletes, male and female, all 5 feet 10 inches in height. Compare their ability in running, weightlifting, or “throwing” sports and “the men will be vastly better,” she says. The review also states, “Evidence directly examining the effect of testosterone suppression as it directly affected trans women’s athletic performance showed no athletic advantage after one year of testosterone suppression.” This, Blade says, “is an outright lie,” adding that in a pubmed paper cited in the review by E-Alliance, the trans-sympathetic authors clearly state, “Notwithstanding [decreases in strength after 12 months of T-suppression], values for strength, LBM (lean body mass) and muscle area in transwomen remain above those of cisgender women, even after 36 months of hormone therapy.”

For a short, jargon-free primer in testosterone as it relates to sport, one that a reader can trust, I recommend a Twitter thread by Ross Tucker, sport scientist and podcaster. I don’t have the space to summarize it here, but I like the image supplied in a response to Tucker’s thread by a certain @IronHeaver: “Great thread. Well stated. Men are like a brick house. Once it’s built, it’s built. [E-Alliance writers] focus on pulling out a few bricks, or counting them. That’s refusing to see the building.”

Finally, the review is awash in woke gobbledygook that is completely irrelevant to any study of the post-puberty male advantage, with or without T-reduction. Such as: “There is strong evidence that elite sport policy is made within transmisogynist, misogynoir, racist, geopolitical cultural norms.” Is there in fact “strong evidence” for all this alleged phobia? Then where is it?  If you can’t produce, then don’t adduce. Blade and I devoted a whole chapter of “Unsporting” to exposing the fat streak of epistemic corruption and plain old misogyny that runs through all CCES discourse and “research.” But we backed up every word with evidence.

In my reading, E-Alliance holds two contradictory positions simultaneously: one, there is no male advantage; and two, there is an advantage, but sport is so transphobic (an opinion, not a data point), “inclusion” needs to trump fairness. A request to Dr. Hilton for comment on the review elicited the pithy observation: “This report is simply tens of pages of scientific illiteracy and incoherent arguments trying to tell us that retained male advantage doesn’t matter for female athletes, or for the integrity of the female category.” Misogyny on steroids, one might say.

Policing eligibility for sport was never the mandate of the CCES. Illegal doping was. CCES’s top executive is retiring in December. CCES should be retired with him. It is no longer—to borrow a sport-policy trope—“fit for purpose.”