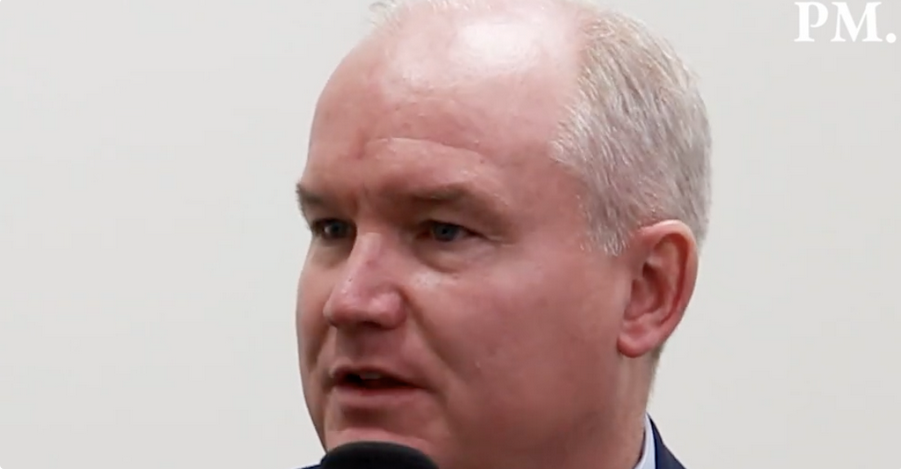 Erin O'Toole has what it takes to unify the CPC, and clobber Trudeau in the next election⁠— which may come sooner than later.

He was out. Then Jim Karahalios thought he was back into the CPC leadership race. But last week the LEOC (Leadership Election Organizing Committee) determined that he is definitively disqualified.

Karahalios has a following, and they will be disappointed, but let’s remember the good reason he was shunned in the first place. He had, as leadership competitor Erin O’Toole framed it, expressed “racist Islamophobic remarks,” with reference to O’Toole’s campaign chair, Walied Soliman, in having implied that Soliman supports the legitimation of Sharia law.

Soliman’s support for Sharia financing, which he regards as a “product” along the lines of Halal or kosher food, is well-documented. In fact, his view is now fairly mainstream. Banks and legal firms regard Shariah-compliant mutual funds as similar to any other ethics-based fund. Most anti-Islamist activists, though, regard tolerance for Sharia-compliant finance as a gateway to accepting Sharia law as a parallel legal system – a proposition that quite rightly alarms all conservatives⁠—and there are indeed politicized Muslims promoting Sharia financing who would be happy to walk through that gateway.

But Soliman has not done so himself, and there is no indication that he wants to. So Karahalios’s letter to members with “Say NO to Sharia Law – STOP Erin O’Toole” in the subject line was a dog whistle to his militant base, shamefully indicting O’Toole as a useful idiot for political Islam.

It was a false allegation that might have stuck, so O’Toole felt impelled to send his own message to the membership, in which he affirmed unequivocally, “I will always fight against Sharia Law. Any suggestion otherwise is preposterous, tinfoil hat thinking. The fact that I even have to say this is profoundly sad.” He ended his statement with the ironic “I’m Erin O’Toole and I cannot believe I had to approve this message.”

It is indeed sad that O’Toole had to defend himself publicly against that accusation. So nobody should waste pity on Karahalios. His instinct to go low with a fear-mongering smear of an opponent goes beyond personal fecklessness. His gesture undermines the activism of all Canadians, including myself, who bear no ill will whatsoever to Muslims, but who harbour legitimate concerns about Islamist networks in Canada. We unequivocally reject race-baiting politicians who approach this issue irresponsibly.

But we do want a leader we can trust to understand and take this file seriously. Is Erin O’Toole that guy? I’ll return to that question in my wrap-up.

Meanwhile: O’Toole is my pick for the leadership. No offence to the other candidates, especially the multiply gifted Leslyn Lewis, but if the CPC is going to have any chance of toppling the Liberals in the present zeitgeist, the leader cannot run on an explicitly socially conservative platform. According to a recent Globe and Mail survey on the “ideal” CPC leader, a third of those polled who identity as conservative wanted someone offering more fiscal conservatism and less social conservatism. Only 15 percent wanted a “very socially conservative” leader. Another third wanted a leader who is “neutral” on social issues.

So it has to be either Peter MacKay or Erin O’Toole. O’Toole won’t vote for abortion restrictions and neither will MacKay, but O’Toole is a strong supporter of speech freedoms on abortion restriction, including within his cabinet, more than MacKay will allow, and that is the best social conservatives can hope for. I think he has what it takes to unify the CPC, and clobber Trudeau in the next election⁠— which may come sooner than later, when the COVID money hemorrhage runs its course.

Confidence in a candidate can often come down to subjective impressions and intuition that he or she has the “it” factor that draws people into his or her orbit. I like O’Toole’s self-presentation. He’s natural, unpretentious, comfortable without arrogance in a position of authority. He projects an air of solid competence, pragmatism and consistency.

I can’t say the same for MacKay, even though he is the more politically experienced of the two. Significantly for me, O’Toole speaks good enough French, but Mackay’s French is abysmal (and how a career politician of high ambition could have spent so many years in public service without pushing himself to acquire basic competency in Canada’s second official language is a cautionary mystery to this Quebecer).

O’Toole’s military experience is an enormous plus in my book. His impulse to serve his nation as a natural outcome of his character formation speaks to a conscientiousness and affinity for discipline conservatives feel reassured by and admire. He’s been abroad in service. He’s a foreign-policy realist. The nation’s security looms large in his perception of the world.

I like the fact, for example, that China has been on his radar for more than a decade as our “most challenging foreign policy relationship,” and he has called for an all-party committee to review the need for stepped-up oversight of the Canada-China relationship (rebuffed by the Libs). I am reassured that O’Toole was questioning Taiwan’s exclusion from WHO as early as May 2018. O’Toole’s strong stance will play well against Trudeau’s pusillanimity on this increasingly tense file.

I also liked his bold response last January, to the downing of the Boeing 737-800 Flight in Iran that killed all 176 passengers, 55 of them Canadians. O’Toole came out swinging in a Toronto Sun op ed against the Iran regime, stating that “the Trudeau government must stop their foot-dragging on listing Iran’s Islamic Revolutionary Guard Corps (IRGC) as a terrorist organization.”

Segueing to a social issue, I was especially pleased to discover last week in a Zoom meeting with O’Toole that he is (finally!) prepared to move forward on redressing a longstanding custody bias against fathers in family court.

O’Toole supports equal shared parenting as a default (in the absence of abuse) in family court law. It’s a policy I have been advocating for throughout my tenure as an opinion columnist, and one that polls show is approved of by more than 70% of Canadians. Moreover, a cornucopia of social-science research points to equal shared parenting as the policy that serves the best interests of children of all ages. It was a plank in Stephen Harper’s 2004 platform, yet not only did his government fail to implement it,  in 2014 Harper inexplicably squelched a private member’s bill that could have made it a reality.

Equal parenting’s only opponents are family-law lawyers, who benefit materially from our outmoded adversarial system, and who stand to lose business with equal parenting as a default, as well as radical feminists, who are content with mother-skewed bias in custody outcomes.

In an email response to my query on that subject, O’Toole wrote, “I have been an advocate of collaborative family law and various measures to remove the toxic environment of family litigation from children who are caught up in the process. In the intensity of adversarial litigation the rights of fathers (normally it is them) and often grandparents get caught up in the process and access can be used as a weapon of legal warfare and only the children suffer.”

I don’t think most Canadians realize that this statement⁠—which simply recognizes the longstanding absence of a level playing field in family law⁠—is an act of political courage in a cultural environment where disproportionately influential radical feminists play the zero-sum game in politics, and where any allusion to the rights of men at all by a politician can be seized upon and twisted as signifying indifference to women’s rights.

So I am happy to shine my little spotlight on O’Toole’s near-unique willingness to publicly commit to a policy that, far from being radical, merely reflects the reality of a paradigm shift in gender-neutral parenting roles that occurred decades ago.

For these reasons, and more⁠—the ones that have gotten broad coverage and don’t need my two cents⁠—I want O’Toole to win.

But now back to my question of whether O’Toole can be “that guy” for those conservatives yearning for the anti-Trudeau leader on Islamism, the true leader who can see⁠—and act on⁠—the bright line between fellowship with the majority of Muslims who just want to go about their business as Canadians, and collusion with the agenda of the troublesome few.

I know O’Toole understands that there is a bright line, but the soft-on-Islamism tag the Karahalios’s militant faction wants him to wear could remain a bit sticky if O’Toole doesn’t apply more effort to communicating that understanding to my moderate faction.

Motion 103, an initiative conceived and drawn up by the PMO and filtered through MP Iqra Khalid, sought affirmation of Canada’s revulsion against anti-Muslim sentiment in Canada.

Except it did not say “anti-Muslim,” it said “Islamophobia,” which neither Khalid nor anyone else in authority would stoop to define. Because they knew what was hiding under that locutionary rock. In every other country in the world in which the term “Islamophobia” is denounced in any legal sense, it invariably includes a proscription against criticism of Islam.

Here was a pivotal moment for freedom of speech, because while motions are not binding law, they express a governmental attitude that could easily translate into law on the next go-around, and which was certainly the intention of the motion’s framers.

In an op ed, O’Toole deplored the inappropriate use of an e-petition as an integral part of the process by which M-103 came to be tabled as “a political stunt [by the NDP] of the highest order.” He did vote against M-103, which is good⁠—but for procedural reasons, not because of its substance, which is not good.

In a 2017 interview with “The Canadian-Muslim Vote,” following closely on the heels of the M-103 affair, O’Toole told his interviewer, “When I called [Ms Khalid] because I hadn’t made up my mind on how I was going to vote, my discussion with her made it apparently – abundantly – clear that it was not her motion because when I was talking about ‘well, why don’t you just take out the reference to the e-petition, keep the word Islamophobia (my emphasis), keep everything else, but end the stunt by the NDP.’”

It seems pretty clear to me that in spite of multiple, trenchant warnings about endorsing this highly charged word – including in official testimony before the Standing Committee on Canadian Heritage from anti-radical Muslims such as Raheel Raza, president of Muslims facing Tomorrow⁠—O’Toole failed to grasp the seriousness of the word’s implications. This lapse in judgment does not make O’Toole an Islamist fellow traveller. It is likely that this is simply a subject on which he is under- or mis-informed, or one to which he has paid insufficient attention.

It is a lapse in judgment that must not persist. There isn’t a decent conservative Canadian who does not deplore racism of any kind, including racism directed at Muslims. The word “Islamophobia” in any official motion or in any other quasi- or actual legal context, however, should be regarded as a clanging alarm bell to anyone on the alert for the erosion of Canadians’ speech freedoms. An endorsement of “Islamophobia” as a synonym for “anti-Muslim” is an erasure of the bright line.

One Vegetable That Literally Destroys You From The Inside
See More

Party leadership campaigns aren’t ordinarily my writing wheelhouse. But there is too much at stake in this particular campaign to stand on the sidelines. None of the candidates is going to offer everyone everything they want. My criticisms are offered in a constructive spirit. For me O’Toole is the only candidate who is right on the greatest number of issues, who projects true leadership and who has the mojo to win a majority in the next election. Godspeed to him.