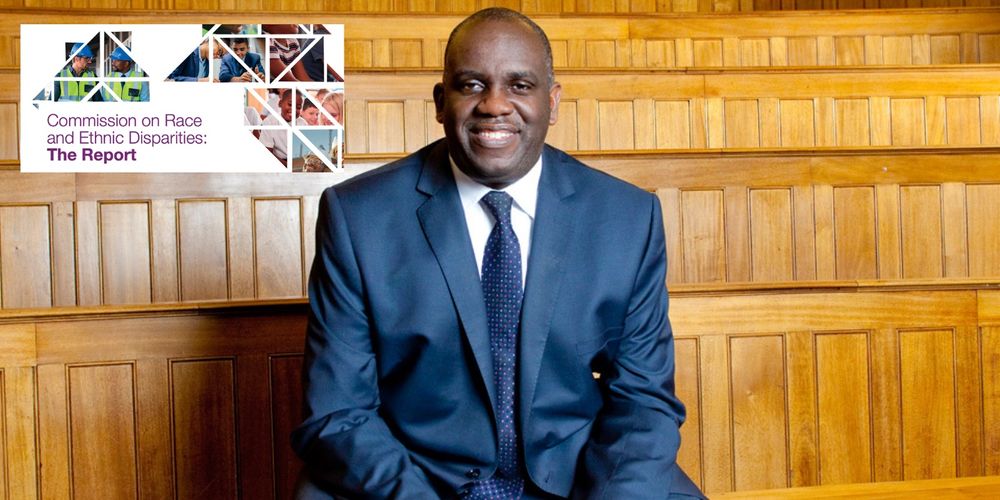 What Rotherham proved, dramatically and tragically for the white girls who were the ongoing barbarism's victims, was that it is now anti-racism that is the default institutional response to inter-cultural tensions.

In the United Kingdom, a significant mobbing is in progress. If the dignified black man the mob has targeted is discredited and toppled, it will be a setback for all who value disinterested research in support of constructive political action. It will also be a setback for blacks in Britain.

In July, responding to a wave of Black Lives Matter protests in America that had spread to the UK, Prime Minister Boris Johnson appointed Tony Sewell, a British educational consultant and CEO of the educational charity Generating Genius, a STEM pipeline program for black children, as head of the government's Commission on Race and Ethnic Disparities (made up of 10 members, all but one of them black), to direct research and write a data-based report with a view to mapping the contours of racism in the UK. The report was published last month.

The main findings did not correspond to the received wisdom that "systemic racism" accounts for all failures to thrive in what is known in the UK as the BAME population (black, Asian and Minority Ethnic). For example, the report found:

The report concludes that the UK is not yet a "post-racial country"—but its success in removing race-based disparity in education and, to a lesser extent, the economy, "should be regarded as a model for other white-majority countries."

Speaking on BBC Radio 4's Today program, Sewell said while there was anecdotal evidence of racism, there was no proof that there was "institutional racism" in Britain.

"No-one denies and no-one is saying racism doesn't exist," he said. "We found anecdotal evidence of this. However, evidence of actual institutional racism? No, that wasn't there, we didn't find that." Dr Sewell added that the term "institutional racism" is sometimes wrongly applied as a "sort of a catch-all phrase for micro-aggressions or acts of racial abuse."

Blowback was swift, scathing and widespread on a range of public forums, from social-media vulgar to chattering-class elite. A Cambridge professor of post-colonial studies likened Sewell to Joseph Goebbels. A Labour member of Parliament suggested he belonged with the Ku Klux Klan. And Sewell was subjected to a smattering of insults like "house Negro" and "race traitor." He was even called an "Uncle Tom" several times on Twitter. The last insult is pretty rich, considering that Mr. Sewell's charity, which coaches black children in maths and sciences in summer schools, is responsible for thousands of them getting college opportunities they would not otherwise have had.

An editorial in The Independent excoriated the report: "At best, the report of the Commission on Race and Ethnic Disparities is well-intentioned but self-satisfied, complacent and preordained. At worst, it is a deliberate and cynical exercise in what we have now come to call 'gaslighting'…[I]t has ended up, sotto voce, concluding that it is white working-class lives as much as anyone's that are being undervalued and blighted by inequalities."

Dr. Halima Begum, chief executive of the Runnymede Trust, a race equality think tank, said she felt "deeply, massively let down" by the report: "I'm afraid this government doesn't carry the confidence of black and ethnic minority communities any longer, certainly not on race."

On April 10, in response to the report's contrarian findings, a five-page letter was published with over 100 signatories demanding that Sewell stand down and the report be scrapped.

Most of the signatories to the anti-Sewell letter are associated with what is known as the Windrush campaign and what came to be known as the "Windrush Scandal."

The Empire Windrush was the ship that brought one of the first groups of West Indian migrants to the UK in 1948. In 2018 many blacks of Caribbean provenance from the Windrush generation were wrongly detained, denied legal rights, threatened with deportation, and, in at least 83 cases, unjustly deported from the UK by the Home Office. The scandal has not yet been fully resolved. The Home Office has dispensed £6 million to just over 400 claimants out of a total possible compensation payout of £570 million.

The signatories were furious that the scandal was only mentioned twice in the 258-page report, and even then, in their opinion, far too mildly, even dismissively, for its importance. Sewell—himself a descendant of the Windrush generation who had known racism in his youth and whose Jamaican parents immigrated to London in 1957— wrote, for example: "Beneath the headlines that often show egregious acts of discrimination, the Windrush scandal most recently, incremental progress is being made as our report has shown beyond doubt. Through focusing on what matters now, rather than refighting the battles of the past, we want to build on that progress."

The report did note that the victims of the Windrush incident quite rightly felt aggrieved, but that "outcomes such as these do not come about by design, and are certainly not deliberately targeted."

In other words, intention matters, and a wormy apple should not be taken as evidence of a contaminated orchard. This is a perspective that butts up against present anti-racism rubrics, which shows no tolerance for hurtful words or unjust deeds that can be construed as racist, no matter the intent. In short, because they did not like the message, anti-racist influencers defenestrated the messenger.

The Windrush scandal is, I am sure, a lingering source of distress to the Caribbean community. One can see why such apparently targeted injustice would incline one to the belief that it is a symptom of "institutional racism." But consider another—far worse —English scandal: Rotherham. The name of this South Yorkshire town is synonymous with epidemic sexual exploitation of underage girls.

A 2014 commissioned report revealed that at least 1,400 children, most of them white girls aged 11-15, had been sexually abused in Rotherham between 1997 and 2013 by predominantly British-Pakistani men. Police, educators, social workers and other adults who could have helped those girls largely kept shtum, and whistleblowers were silenced, the report said, out of fear of being branded racist.

Racism certainly does exist in the UK, and nobody is pretending it doesn't. What Rotherham proved, dramatically and tragically for the white girls who were the ongoing barbarism's victims, was that it is now anti-racism that is the default institutional response to inter-cultural tensions. Faced with the possibility of exposing the British-Pakistani or even the entire Muslim community to national hostility, a conscious, systemic decision was made to turn a blind eye for years and years to organized child abuse, and to sacrifice white children on the altar of political correctness. To turn Sewell's observation about Windrush on its head, Rotherham's outcome did "come about by design," and was certainly "deliberately targeted."

It's a pretty sad commentary on a lobby that supposedly exists to further the interests of an identifiable group when good news angers them. By good news, I mean a report that not only suggests that a great deal of progress has been made in the last 50 years, and that the group's problems are not as bad as anecdotal evidence suggests, but also that points the way to redressment of the internal cultural factors that are holding part of one racial group more than others.

The constant shifting of all blame for blacks' relative stagnation is not productive. As Sewell noted in a recent, sympathetic interview with the Wall Street Journal, if every problem in society is attributable to racism, "how can Britain ever be a country at peace with itself?" (I recommend readers turn to this interview with Tunku Varadarajan, fellow of the American Enterprise Institute and at New York University Law School's Classical Liberal Institute for a more nuanced appreciation of both Tony Sewell and the report's findings.)

If anti-racism activists and their media allies were not wedded to their one-explanation-fits-all belief system, they would have greeted Dr. Sewell's report with gratitude and enthusiasm. The extraordinary hostility with which Dr. Sewell's evidence-based report has been met is proof, if it were still needed, that proponents of victimhood politics simply can't bear to part ways with pernicious theories of ineradicable white triumphalism and perpetual black oppression.

Dr. Sewell is a true classic liberal who finds a glass half full and seeks to fill it. His detractors see a glass half empty and seek to cap it. Let us hope the cancel-culture mob does not get its way in this case, as it has in so many others.