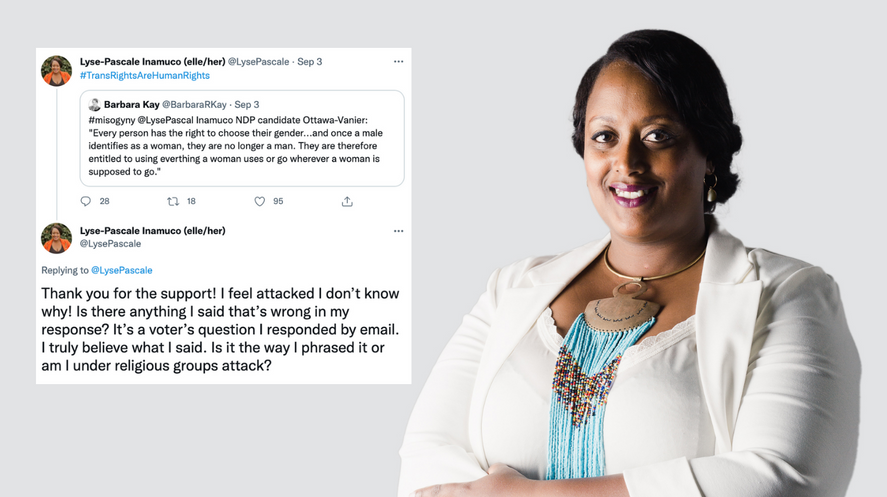 They keep saying "trans rights are human rights." But when you say to them, "But women's rights are also human rights," their faces go blank and their eyes go dead. They are not programmed for logic.

In this federal election, Lyse-Pascale Inamuco is the NDP candidate in the riding of Ottawa-Vanier. Her campaign motto is "Fighting for you." That seems pretty benign on its face. But the devil is always in the details. The "you" in "fighting for you" is not all it seems. As it turns out, if you are a woman demanding your Charter sex-based rights in areas which traditionally have been protected spaces for you, Pascale may suddenly be AWOL until you go away.

I should stipulate that I am not writing this column out of concern that Inamuco might actually win this riding. It is pretty well as certain as death and taxes that the honour will go to Liberal Party candidate Mona Fortier. However, I happened to get into a little Twitter joust with Inamuco over her response to a query from a resident in her riding, and I think what she had to say in that response is such a perfect portal into the progressive mind on current gender-ID controversies, it deserves amplification.

Ottawa-Vanier riding resident, I'll call him XY, emailed all three party candidates with the same question: "Will you support the current policy of allowing males into women's safe spaces such as washrooms and spas, and the placing of males into women's prisons, and not only allowing but advocating for males to compete against girls and women in sports?"

Neither the Liberal or Conservative candidates responded (probably realizing no good could come from it), but Inamuco—thinking she was on solid ground—walked straight into the quagmire. She wrote back to XY:

"What you are asking is if I do support the LGBTQ2+, transgender, non-binary, queer community? Is that correct?

"Every person has the right to choose their gender. It is not my concern to go tell them who or what they should be. They have the right to choose and once a male identifies as a woman, they are no longer a man. They are therefore entitled to using everything a woman uses or go wherever a woman is supposed to go" (emphasis mine).

"The rate of suicide in that community is so high because of society's stigma and discrimination towards them," Inamuco continued. "We are to be tolerant and understanding, non judgmental. They are  human beings just like you and me and should have rights protecting them and ensuring their safety and well-being in the society so they can continue to contribute positively.

"I hope this answers your question."

Inamuco breezed right past XY's concerns about natal males in female spaces in her response. And the central paragraph ("Every person… supposed to go") struck me as such a perfect example of the magical thinking on gender behind our policies and laws that I felt obliged to make it public on Twitter.

The tweet gathered some indignant attention and pushback, though also some supportive activity for Inamuco. When she became aware of my tweet and the gathering attention to it, Inamuco tweeted: "I feel attacked I don't know why! Is there anything I said that's wrong in my response? It's a voter's question I responded by email. I truly believe what I said. Is it the way I phrased it or am I under religious groups attack?"

I tweeted back: "I am not 'religious' @LysePascale. You are 'under attack' because the uninterrogated gender ideology you adopted whole hog makes you willing to throw vulnerable women in prisons, sport and intimate spaces under the bus to accommodate biological men's alleged 'rights'."

Inamuco tweeted: #transrightsarehumanrights. I tweeted back: "So are women's *sex-based* rights, @LysePascale. Says so right in the Canadian Charter of Rights. When they collide, you abandon women. Shame on you and the NDP."

Notice Inamuco's reflexive assumption that only "religious" people—unenlightened transphobics is what I hear in that leap—could possibly be concerned about the rights of women when transwomen rights are so obviously to be privileged over those of women?

Inamuco asks: "Is there anything I said that's wrong in my response?"

So by forcing her hand, I got my answer to whether she had been careless or whether she is truly that confused. She thinks a man can literally change into a woman because he identifies as a woman. She has no idea that gender and sex are two different things. How is she any different from someone who thinks eating a communion wafer blessed by a priest is literally the blood of Jesus?

You can't argue with such people. They will refuse to face up to the fact that gender-expression rights and sex-based rights are bound to collide in spaces where categorization divides men and women according to their biology, not their beliefs. They keep saying "trans rights are human rights." But when you say to them, "But women's rights are also human rights," their faces go blank and their eyes go dead. They are not programmed for logic.

And their hearts are hardened when you present actual cases of women's rights foreclosed. Tell them there is a child rapist housed with women in prison, and they will murmur platitudes about human rights—as though humans were simply an undifferentiated blob with each human being entirely neutral until they "choose" their gender, at which point there are suddenly after all two sexes to choose between for identification purposes. They don't want to hear about actual women being offended or threatened or robbed of a level playing field. It doesn't compute with the internalized mantra that "they"—including the child rapist—"are no longer a man" once they have self-identified as a woman.

Inamuco's failure even to acknowledge that there is a problem, and that real live women's rights are being sacrificed on the altar of trans reverence is a testament to the flight from reality and sanity at the highest levels of cultural elitism. I have no personal axe to grind with Inamuco. She is a foolish automaton with no capacity for critical thinking on this issue, but there is no evil in her heart. She believes she is a compassionate friend to a marginalized group in society that deserves affirmative action to save them from suffering. She believes in "inclusion," even when it means "exclusion" for women. But she only has eyes for the inclusion; she can't or won't see the exclusion corollary.

There are so many Inamucos. Intellectually clueless and incurious, but true religious believers. Inamuco stands for what should worry us all. She represents the NDP's thinking, but she could as well be running for the Liberals on this issue, for they are united in cultish zombieism on the gender file.

For their part, O'Toole and many Conservatives understand the problem in all its insalubrious implications, but they are too fearful of being painted as transphobic to make it part of their platform. If only they had the courage to challenge Trudeau and Singh on the collision of sex-based and gender-expression rights—the courage to identify the areas where the law needs exemptions and to demand them, they would likely find vigorous public support across all political lines. Only ideologues want males in women's prisons, women's spas, women's rape crisis centres and women's sport. Real people believe in fairness. There are hundreds of ideologues. But there are millions of real voters.