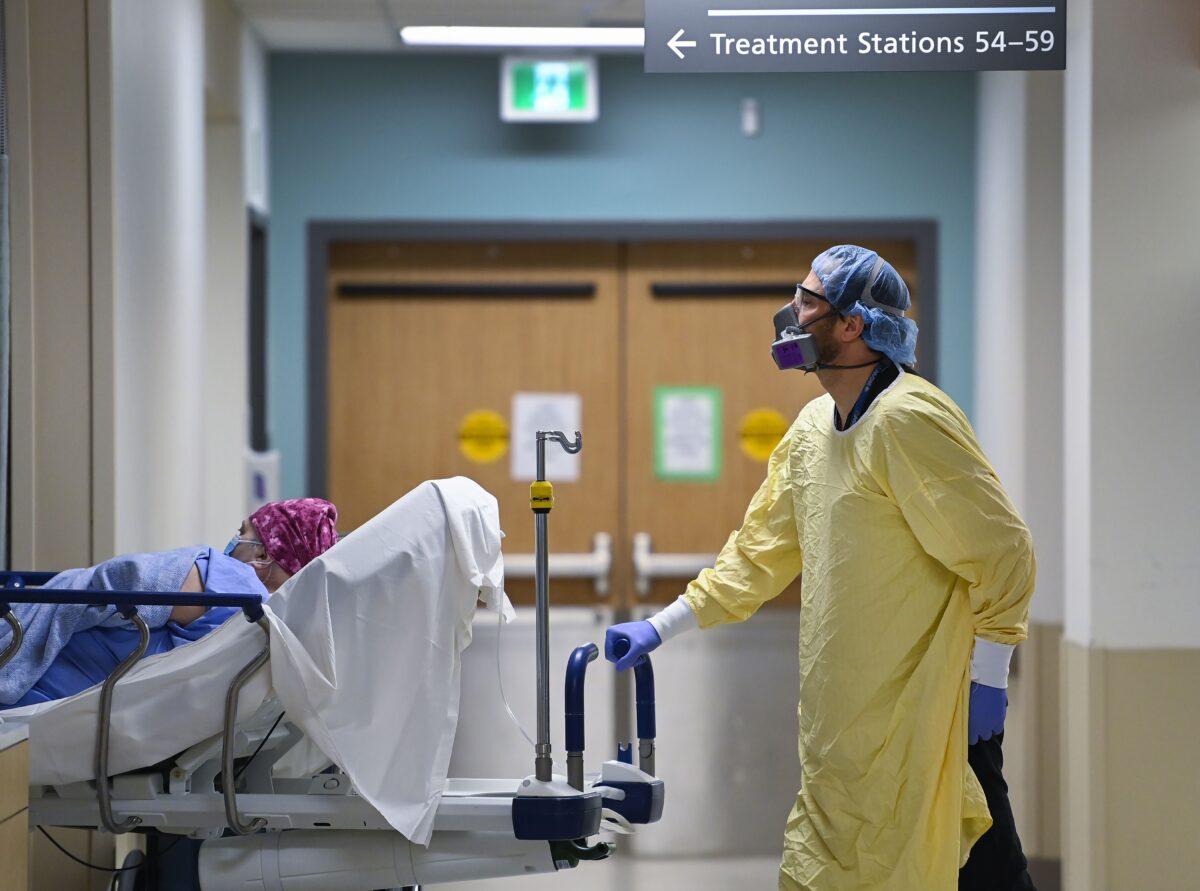 Leaders Fuel Vaxx/Unvaxxed Divide, but They Are to Blame for Canada’s Inadequate Hospital Capacity

A mid-January Maru Public Opinion poll finds that a significant number of Canadians favour sternly punitive measures for the unvaccinated. Of the poll’s online 1,506 panel, 33 percent were in favour of refusing driver licence renewals to those who refused a (likely forthcoming) mandatory vaccination, 37 percent found denial of access to “any publicly funded hospital/medical services” acceptable, and 27 percent would support a five-day jail sentence for “endangering others/overwhelming [the] healthcare system.”

Thus, a polling firm executive concluded, “A majority of Canadians have little sympathy for the unvaccinated.” With respect, “little sympathy” is a euphemism for these findings’ far more disturbing theme. Such a level of hostility toward a designated group of fellow citizens should alarm responsible leaders. Unfortunately, our leaders are the source of the moral panic that is driving the hostility.

In a September 2021 interview on a Quebec talk show, Prime Minister Trudeau referred to those opposed to the vaccine as “misogynists” and “racists.” Then, ominously, “Do we tolerate these people?” This is a dog whistle, one might even say incitement to regard those who refuse the vaccine as fifth columnists, enemies of the people, whose exposure and punishment is a patriotic duty.

The poll’s findings jibe with my own anecdotal experience. Because of my age and its associated risks, the decision to get vaccinated/boosted was a no-brainer for me. Likewise with everyone in my social cohort. But several of them—all university-educated, highly engaged in current events, self-identified as political centrists or traditional liberals—have expressed shockingly illiberal attitudes toward the unvaxxed, including approval of refusal of hospital treatment for COVID, imposition of fines, mandatory vaccination, job loss, house arrest—anything it takes to ensure they are brought into line.

Encouraged by Trudeau’s brand of discourse and reinforced by its echo in the media silos they inhabit, these friends believe the unvaxxed are conspiracy theorists, Trumpist deplorables, or just plain stupid. They believe that anyone who shares a dissenting view on Fox News (since nobody else will provide them the opportunity) is spreading misinformation and ought to be censored. Moreover, early treatments that Trump viewed with favour must not only be considered garbage, but the government’s public-interest duty to proscribe.

Thanks to my profession, I am exposed to perspectives from across the board. I have a number of younger friends who have refused the vaccine. They approve of the vaccines for the elderly and others known to be at high risk. Far from being racists and misogynists, they are among the most intelligent, rational, and intellectually responsible people I know. None are conspiracy theorists or anti-vaccine in general.

Several are academics, skilled researchers who do not rely on media or government spokespeople but conduct investigation at the primary-source level. It is not false modesty to say that they are a lot smarter than I am, so when they take a principled stand that involves serious personal sacrifice, including the loss of academic careers, I listen respectfully. (I try to adhere to the principle: argue with the conviction that you are right; listen with the assumption you are wrong.)

We are constantly told that we are supposed to trust “the Science,” as though all but a disreputable few fringe scientists-in-name-only (SINOs) were in absolute sync on all matters related to COVID-19.

But in reality, science is rarely settled on anything, and should always be seen as a collaborative, ongoing process. There are hundreds of bona fide credentialled scientists who dissent from “the Science.” But they are routinely “cancelled” by the media and relegated to platforms like Fox News and Joe Rogan’s immensely popular podcast. Which in turn makes them seem even more suspicious to mainstream media audiences. Since what they have to say seems reasonable to those who do access their voices, their marginalization encourages a belief among their followers that there really is a conspiracy by Dr. Fauci, Big Pharma, the mainstream media, and Big Tech to suppress inconvenient truths.

It is from my exchanges with my dissident friends that I learned about and read the Great Barrington Declaration. The highly accredited epidemiological, immunological, and public health policy experts who wrote it are not SINOs. The declaration’s recommendation of “focused protection” rather than general lockdowns seems reasonable to me, and to its near-million signatories. These friends introduced me to the podcasts and writings of Dr. Peter McCullough, a Texas cardiologist with over 1,000 publications in the National Library of Medicine. His passionate advocacy for early treatment of COVID-19 with hydroxychloroquine, antibiotics, aspirin, and vitamins has thrust him into the SINO camp as well.

I am a lay person, not a scientist or researcher in this area. I only have my critical-thinking skills and common sense to guide me in forming an opinion on public-health policy. I am not using this space to make a pitch for this or that public policy. What motivated me is horror at the rapidity with which so many intelligent, civilized, normally-compassionate people who are in the same boat as I am—reliant for information on accredited scientists who have done extensive research—have absorbed such a near-feral loathing for these “others” that they can endorse abrogation of their basic human rights with complacency. I am appalled that the charter rights of those who refuse the vaccination have been steamrolled by government edicts, and troubled by the judiciary’s compliant extension of the charter’s “reasonable limits” to unreasonable lengths.

The Maru poll’s findings are proof of the fragility of “rights” when individuals are seized by fear that precious community resources are in such short supply that their own personal survival may come down to a game of musical medical chairs. The source of this panic is Canada’s scandalous paucity of ICU beds and personnel. Even before COVID, 91.6 percent of acute care beds were occupied. In the United States, average occupancy rate on acute care beds was just 64 percent. In the United Kingdom it was 84.3 percent.

If Canadians knew that nobody, vaxxed or unvaxxed, would be turned away from critical-care treatment, even though a disproportionate number of unvaxxed patients need critical care, they would perceive the unvaxxed through the same lens as they see smokers who take up a disproportionate share of cancer wards: foolish, perhaps, but not hateful.

The leaders who encourage us to hate and punish dissenters for the spread of an unstoppable virus were the same tribe that demonstrated complete negligence in preparation for a predictable—and long predicted—pandemic of exactly this magnitude. They are the ones deserving of the question, “Do we tolerate these people?”

Barbara Kay Follow Barbara Kay has been a regular columnist for the National Post since 2003, is a senior columnist for the Western Standard, and also writes for other publications. Her latest writing project is co-authorship with Linda Blade of the book “Unsporting: How Trans Activism and Science Denial are Destroying Sport.” Featured ChannelsTop 10 Videos Live Q&A: China Reports Community Transmission of Hemorrhagic Fever; Biden Has His ‘Worst Week’sharecomments Investigators Reveal Cult, Murder, and Spies Around Photos of ‘Chinese Troops’ in Canadasharecomments Sharyl Attkisson: How Propagandists Co-Opted ‘Fact-Checkers’ and the Press to Control the Information Landscapesharecomments Facts Matter (Jan. 18): Leaked Fauci Financials Expose How He Profited From Pandemic, Invested in Chinese Companiessharecomments Investigating the Book of Revelation and the ‘Seven Churches’: Tim Mahoneysharecomments Kash Patel Predicts US Will Be Forced to Send Troops Back Into Afghanistan Within 18 Months | Kash’s Cornersharecomments New Emails Confirm Top Scientists Told Fauci That Natural Origin of COVID-19 Was ‘Highly Unlikely’ | Truth Over Newssharecomments Thomas Harrington: How Did Our Society Become So Fearful?sharecomments Walter Kirn: The Emerging Dystopia, a Combination of Orwellian Tyranny and Huxleian Self-Indulgencesharecomments Bethany Mandel Talks ‘Subtle Indoctrination’ in Children’s Books and K-12 Education; New Heroes of Liberty Seriessharecomments