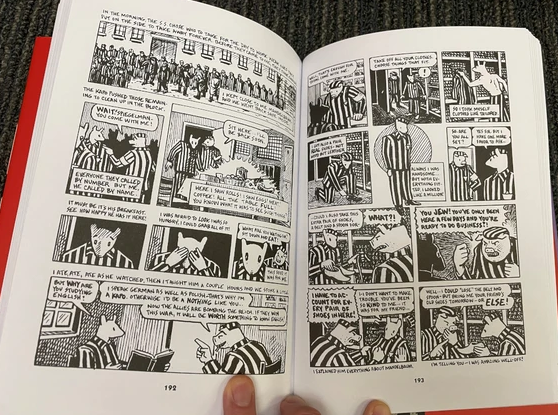 'Maus' has been an important tool to teach kids about the Holocaust for decades. So why is Tennessee banning it?

The author, Art Spiegelman, expressed his 'total bafflement' at the decision. Indeed, we should all be baffled

How do you teach the Holocaust to high school students? “The Diary of Anne Frank” is an unthreatening introduction. But it ends when Anne still believed good would triumph over evil and thus does not relay the full horrors of the event, or the indelible mark it left on survivors and their families.

In 1990, German writer Friedemann Beduerftig published a comic book, “Hitler,” which for three years was used in a pilot project to teach high school students the unvarnished truth about the Holocaust, and Germany’s role in it. In his graphic narrative, Beduerftig used the actual words and images of Adolf Hitler, Joseph Goebbels and other party leaders to accompany the story of their rise to power, alongside drawings of concentration camps, the ovens, stacked corpses, the torture of Jews and the lot.

It was deemed a pedagogical success, but in deference to a request from the Israeli Embassy, the project was halted as “an embarrassing mistake.” The Israelis knew such a teaching tool might easily be repurposed by die-hard Hitler sympathizers as neo-Nazi propaganda.

The Germans’ intention was honourable: to ensure young Germans were so unequivocally apprised of the details that “never again” would apply in perpetuity — at least on German soil. Their pre-internet naivete is understandable. But we now know that a prophylactic against evil in a healthy mind can be an instruction manual to a mind that’s innately deformed, or twisted by ugly influences.

Four years earlier, cartoonist Art Spiegelman had solved the problem, but Beduerftig was unlikely to have known that. In August 1986, Spiegelman published “Maus I: A Survivor’s Tale,” which was lauded by the New Yorker as “the first masterpiece in comic book history,” and by the Wall Street Journal as “the most affecting and successful narrative ever done about the Holocaust.” Spiegelman won the Pulitzer Prize’s “special award” in 1992, following the publication of “Maus II: A Survivor’s Tale.”

In recreating his human characters as animals — generic mice for Jews, cats for Nazis, dogs for Americans — Spiegelman told truths in a format no neo-Nazi would find appealing for exploitation, but that fully engages and informs the reader. Spiegelman called what he did “comix” — a co-mix of words and pictures “trying to surround actuality.”

So it struck informed observers as an act of supreme pedagogical frivolity when, last month, the Tennessee Board of Education withdrew Art Spiegelman’s acclaimed novel from its McMinn County eighth grade curriculum. According to the board’s statement, the novel was removed for the use of profanity (“bitch,” “god damn”), nudity (one tiny image of a woman in a bathtub) and for depictions of violence (in a book about genocide).

In an interview, Spiegelman expressed his “total bafflement” at the decision. Indeed, we should all be baffled. There’s no shortage of books about the Holocaust, but Spiegelman’s graphic novel takes the reader to a plane that outstrips the reach of mere print.

The seed for “Maus” was planted during Spiegelman’s recovery from a nervous breakdown he suffered while attending university in 1969. It was partly a consequence of hallucinogen use, but also the accumulated strain on a sensitive child who often imagined Zyklon B gas pouring out of the shower-head, and who was routinely awoken by his parents screaming in their sleep (he told an interviewer he considered this normal, something that happened to all children).

Shortly after Spiegelman’s release from hospital, without warning or explanation, his mother, Anja Spiegelman, committed suicide (she was always a depressive, and had lost one son in Europe; perhaps she feared she was losing another.) This period of his life is also chronicled within “Maus.” At one point in the story, Artie, who’s based on Spiegelman, confesses to his wife, “When I was a kid I used to think about which of my parents I’d let the Nazis take to the ovens if I could only save one of them. Usually I saved my mother. Do you think that’s normal?” His wife calmly replies, “Nobody’s normal.”

The project took its particular form as a means for Spiegelman to achieve an intimate connection with his emotionally remote father, Vladek Spiegelman, who willingly spent all the time his son requested for candid recorded interviews about every detail of his life. His accounts were supplemented by Spiegelman’s two trips to Europe to visit his father’s small Polish city, Czestochowa, and Auschwitz, plus countless hours with other former inmates, along with research into public archives.

Spiegelman’s presence in “Maus” — the prickly relationship between Artie and his father, Vladek, is given equal time with the history lesson — invites the reader into the action through a portal most conducive to empathy. Everyone has a child-parent story. Spiegelman’s, along with many other children of survivors, happens to be freighted by more intense and surreal elements than most.

Vladek is the opposite of Anne Frank. He’s curmudgeonly and emotionally withholding. But the qualities that make him unsympathetic — selfishness, cynicism, relentlessness — were responsible for his and his wife’s survival. Long after he has become financially secure in America, he keeps the gas stove in a rented vacation cabin lit all day so he can save the expense of a match to light his cigarettes. Suffering did not make him a better or a nicer person. He only endured.

There is a message about human nature here that readers must grapple with, but no uplift to be drawn from it. That is probably one of the reasons why, at first, no publisher would touch it. Because they are innocent in the literal sense, victims are also supposed to be “good,” like the hopeful, but crucially under-informed, Anne Frank.

“Maus” is a ruthlessly objective, but also entertaining, work of genius on a pivotal milestone in human history. It also illuminates the complexity of trauma’s effect on the children of survivors. “Maus” should therefore be required reading in every high school in every nation that is pleased to call itself civilized. It’s good for adults, too.