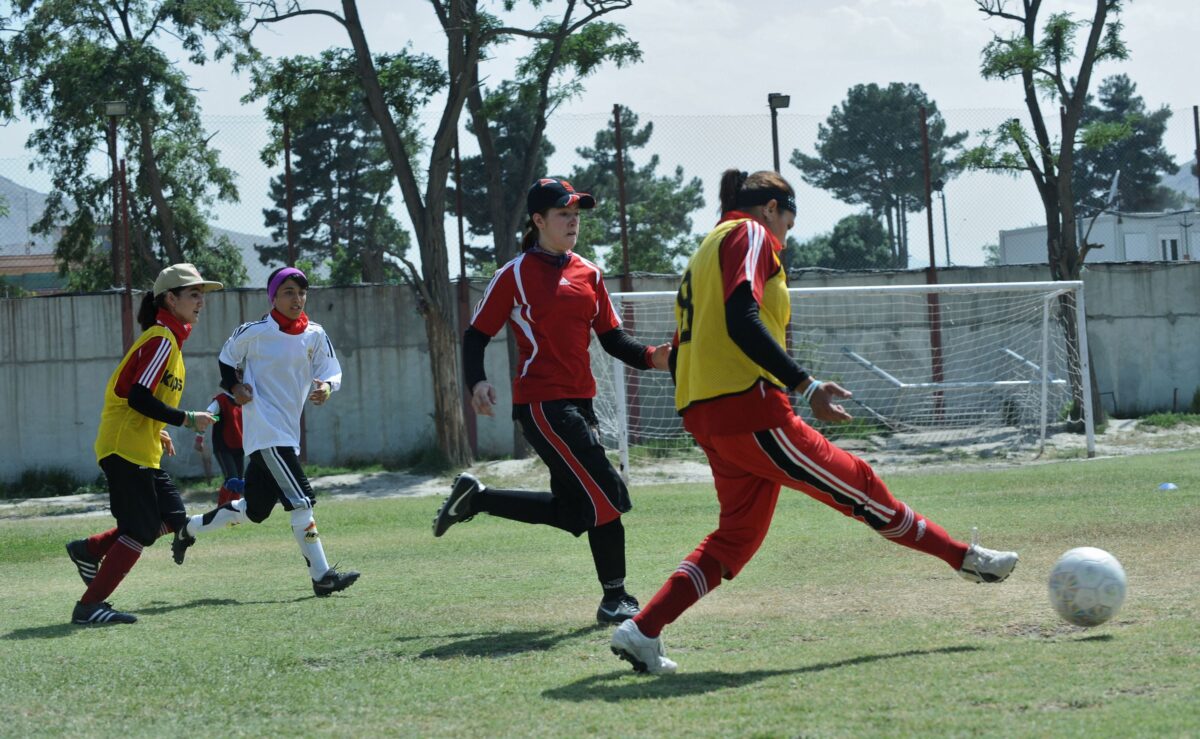 For most of us in the West, the image we instinctively associate with women under Taliban rule in Afghanistan is the animated shroud known as the burqa, the only clue to their humanity a pair of eyes behind a fabric grille. It therefore came as a surprise to me to discover that Afghanistan had a national female soccer team, formed in 2007—the U.S. presence since 2001 gave women’s sport a big boost—made up of girls age 14–16.

But now it is a team in limbo. Like so many other Afghan women whose lives had improved under American protection, the abrupt withdrawal of U.S. forces in August exposed them to anticipated reprisals from the Taliban, whose fundamentalist strictures forbid sport to women, and whose 1996–2001 tyranny was especially brutal for women. Even more damning in Taliban eyes, these girls’ families were active advocates for girls’ rights. One member of the team has ambitions to be a doctor; another a movie producer; others, engineers.

For weeks, the girls, their families, and soccer federation staff moved around the country, waiting for help to get out. They suffered a cruel setback with the horrific suicide bombing by ISIS terrorists at Kabul airport, which killed 169 Afghans and 13 U.S. service members. But eventually, in late September, they made it to Portugal. There, team captain Farkhunda Muhtaj, who had spent weeks helping to arrange the team members’ rescue from her home in a small town near Toronto, flew to Lisbon for a tearful reunion with them. The hope is that the girls will eventually settle in the United States. (Why not Canada?)

Superficially, this is a feel-good story. Plucky girls escape the Taliban, and now they are safe. But it is like the glow of a candle in a dark and chilly cave.

News of the soccer team’s escape to freedom only came to my attention because it was tangentially linked to a shocking news item that went viral in South Asia, concerning a member of Afghanistan’s national women’s volleyball team, Mahjubin Hakimi, who had reportedly been beheaded by the Taliban.

As it turned out, the beheading did not happen, but it speaks volumes that so many people believed the story. The Italian Volleyball Federation observed a moment’s silence for Hakimi at one of their games, and the Paris-based Ligue du Droit International des Femmes sent an indignant open letter to top International Olympic Committee officials, demanding that they respond to this “policy of terror which targets Afghan sportswomen.”

Hakimi, did, however, die in mysterious circumstances. Alt News reported that, according to a relative, “She was not killed by the Taliban in October. Mahjabin’s death occurred on August 6 and her body was found in her fiancé’s bathroom in Kabul. He claimed Mahjabin suffocated herself to death. However, our family suspects foul play by her in-laws.”

Hakimi was apparently not only a volleyball player, but a police officer. A Twitter comment on Oct. 20 states, “She was a member of Afghan National Army Commando and was killed by her in laws 10 days before The Taliban… I knew her personally.”

If true, Hakimi should be held up across the Western world as a model of female heroism. She insisted on her right to participation in sport. She had the courage to join the front line of resistance against the Taliban. And she took these risks in the full knowledge that danger to women in Islamist regimes comes not only from outside one’s home, but also from within.

For if Hakim’s in-laws did in fact kill her, it would have been an expression of honour culture, whose worst effects are visited upon girls and women. In such scenarios, the female’s Islamically non-conforming behaviour has shamed her family, a humiliation that can only be redressed with the female’s death. Hakimi’s unusual choices could certainly have made her the target of disapproving rumours, sometimes all it takes in honour-shame cultures to trigger lethal action of this kind.

Perhaps if this were 2012, Mahjabin Hakimi would have achieved instant international reverential recognition, as happened to teenage Malala Yousafzai of Pakistan, when the Taliban shot the young blogger for BBC Urdu in the face for her temerity in promoting education for girls.

But our society has changed since 2012. Back then, the fate of girls and women in misogynistic cultures troubled us deeply. In 2009, Canadians were graphically schooled in the pathology of honour culture when three Afghan-Canadian girls and their stepmother were killed by their father, mother, and brother for their alleged crime of adopting (the modest end of) Western social behaviours.

We have moved on since then. Nowadays we are more concerned about the “safety” of biological males who identify as women. Never in history has a word been dumbed down so far and so quickly. By safety, we no longer mean protection from physical violence; we mean a biological male’s hurt feelings when the protection of women’s rights to physical security and fairness takes precedence over his wish for gender validation.

During the weeks the Afghan women’s soccer team was desperately seeking escape from the Taliban—a sport story that merited serious attention in the West but came and went without commentary—our media were instead fixated on an “unsporting” story. They were consumed with reverence for New Zealand weightlifter Lauren Hubbard, out of shape and over the athletic hill at 43, a formerly mediocre male competitor, but the first openly trans competitor in a solo event at the Olympic Games in Tokyo.

Hubbard didn’t advance to the finals. Nevertheless, the University of Otago honoured Hubbard with its “sportswoman of the year” award, passing over compatriot Lisa Carrington, who won three gold medals, making her New Zealand’s most successful Olympian in history.

Misogyny comes in many forms. Common to all is the erasure of women in the service of male entitlements. The Taliban literally erase women with body bags. They believe Allah wants it that way. Our less crude and “enlightened” gender theorists erase women through a form of linguistic legerdemain (“transwomen are women”) that has resulted in women’s loss of physical security in formerly protected spaces, and loss of their right to a level playing field in sport. The theorists believe that their god, the Gender Unicorn, wants it that way.

And this velvet Talibanism is what our cultural elites, including the woke media, sitting comfortably aloft in their ideological dream palaces—far, far away from the tears and fears of actual girls and women—presume to call progress.