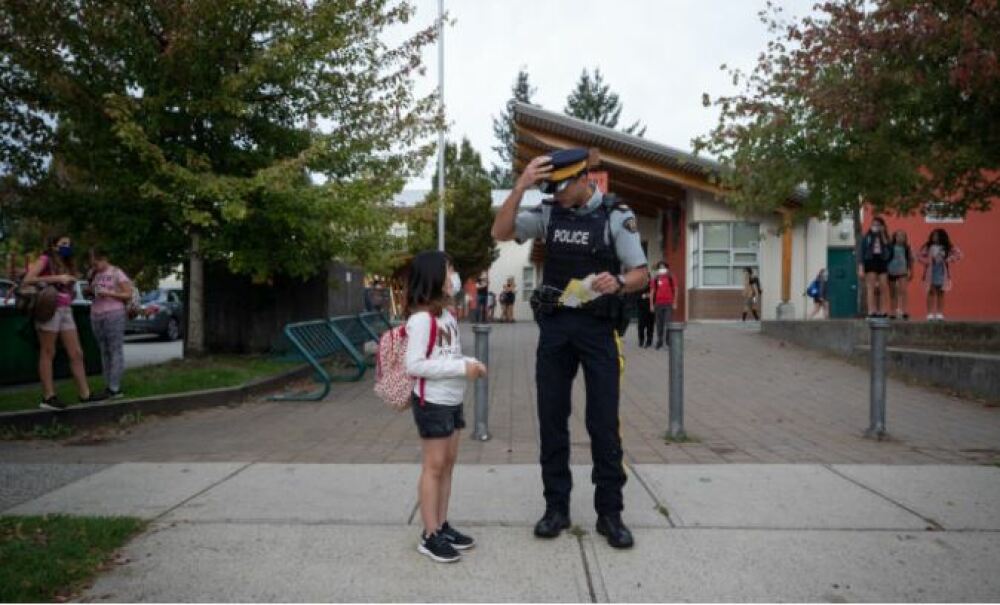 An RCMP officer speaks with a student outside of an elementary school in North Vancouver on Sept. 9, 2021. (The Canadian Press/Darryl Dyck)

Ontario Board’s Move to Drop School Police Program Based on Politics, Not Evidence

The School Resource Officer program (SRO) was inspired by the 2008 shooting death of a student at a Toronto school. With student safety the (then) uncontested objective, the Toronto District School Board (TDSB) placed police officers throughout their system. Since then, anti-racism—and anti-police—activism in the United States, spilling over into Canada, has complicated the matter.

Well before the May 25, 2020, killing of George Floyd, which propelled anti-police animus through the roof, Black Lives Matter allies in Canada had been protesting SRO programs. In 2017, the TDSB decided to suspend their SRO after activists claimed some 10 percent of students said they felt “watched” and intimidated by police presence.

In 2020, the Hamilton-Wentworth District School Board (HWDSB) voted to end their SRO program, in place since 2016, an iteration of a formal liaison with police that had existed since 1995. The contemporary program had 11 police officers working with staff and students at 196 elementary and high schools—public, private, and Catholic—across Hamilton. The lean unit rotated appearances at each school, doing presentations on such topics as personal safety, human trafficking, and cyber-bullying. Officers would respond to incidents by arranging resolution-oriented meetings. They also helped law-breaking students navigate the legal system with a view to avoiding serious penalties.

The HWDSB had been the target of a fierce anti-SRO campaign for over a year before the Floyd killing, waged by a group, Students4Justice, who aggressively lobbied the trustees to end SRO. At a board meeting on June 8, 2020, trustees first agreed to review the program, and a report was to be delivered by October of 2020. But under pressure from the activists, a majority of the trustees voted for SRO termination in the city’s English public schools.

“This motion to terminate is for black students. The motion is for indigenous students, Latino students, Muslim students. LGBTQ2+ students. Marginalized students and any student that has felt less than welcome at our schools because of a police presence,” said trustee Cam Galindo. Activists applauded, but Hamilton Police Service Superintendent Will Mason expressed disappointment, saying the point of the police program in schools was to build a positive relationship with kids, which becomes difficult “if the only time we interact with young people is when something bad happens.” Unfortunately, reason and prudence were no match for the high, politicized emotion that carried the day.

Do police programs in schools work? That should have been the only consideration for HWDSB. The data available points to their success, but perception may contradict such evidence. And when negative perception is politically weaponized—with support from trustees flouting their mandate of political neutrality, as happened in HWDSB—it can override objective deliberation.

Studies of police programs in the United States show that students generally take a positive view of a police presence, but black students, who are more likely to be arrested in school according to the American Civil Liberties Union, take a more negative view. A California survey found that 61 percent of students felt safer with a police officer in their school, but only 41 percent of black students agreed. A New Orleans survey found similar results. A 2017 national study found that arrest rates of children increased after schools received federal grants to hire police officers, starting in 1999, and other studies indicate that black students are more likely to be arrested. But the national study also found that police in schools do make the schools safer; in particular, crime involving violence diminished.

According to an analysis of education department survey data from 2019, at New York schools with fewer than 20 percent black students, 83 percent agreed that school safety agents “promote a safe and respectful environment at this school.” But at schools with more than 80 percent black students, that falls to 76 percent. (A former HWDSB trustee I consulted estimated that fewer than 10 percent of that network’s students are black.) More important, though—because of more objectively formed opinions—is that 96 percent of families and 90 percent of teachers in the survey held positive views of school safety agents.

What about Canadian schools? An extensive two-year study from Carleton University published in 2018 evaluated the $9 million, 22-year SRO program in five Peel District schools near Toronto. The program is unique in that dedicated officers are assigned to all the region’s high schools. Their report concluded that SRO not only reduces crime and bullying but also provides extensive social and economic benefits, estimated at 11 times the annual cost. Of the 1,300 students interviewed from diverse socio-economic neighbourhoods, most held positive views, especially those who had been victimized in the past. One Grade 9 respondent said, “If anything goes bad, they are here. You always feel secure.”

Upon the release of the study, business professor Linda Duxbury, the lead researcher, proclaimed the Peel program a “resounding success,” and the data from the study “unequivocal.” She recommended the Peel model to other communities. Her co-author, psychology professor Craig Bennell, director of Carleton’s Police Research Lab, added, “[B]y working with school administrators, school resource officers can help to make school a safer place for our children to grow and learn. We say this with some confidence because, no matter how we looked at this issue within our study, our results were overwhelmingly positive.”

HWDSB acted precipitately in ending their SRO program without a full review of all this available data. Ironically, a year after its curtailment, a Hamilton Police Association report revealed a year-over-year decrease in youth crime between 2018 and 2019, years when the program was operative.

The HWDSB’s too-hasty decision sprang from ideological capture of most of the board’s trustees. That it was politics rather than responsible trusteeship motivating the vote is borne out by the fact that the three more responsible dissenting trustees, who called for further review before any decision was taken, were made to suffer a humiliating personal smear campaign and career derailment as a punishment for their political apostasy. But that’s a story for another day.