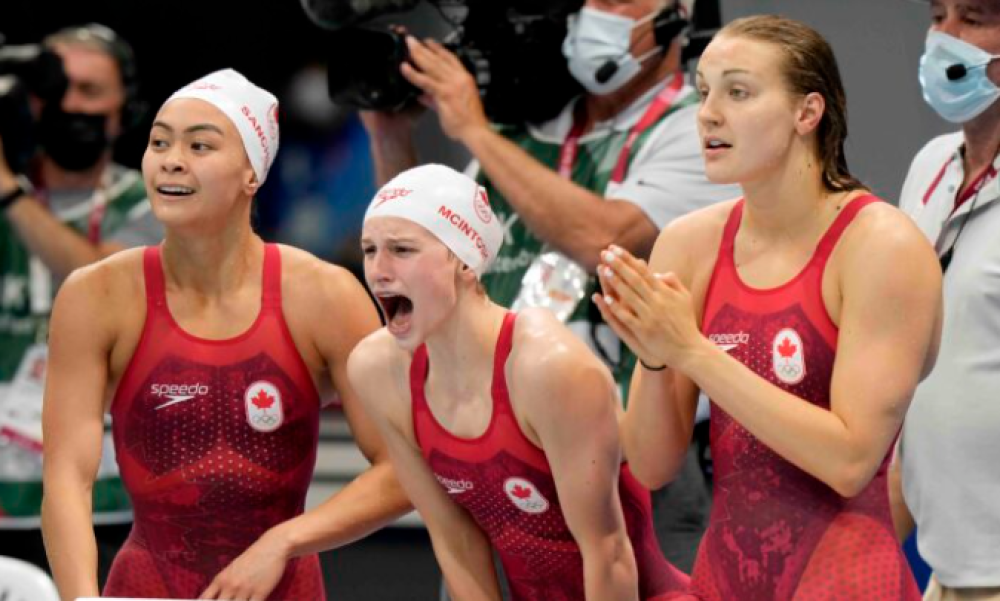 Members of Canada's women swimming team cheer on their teammate during the women's 4x200m swimming final event at the Tokyo Summer Olympic Games on July 29, 2021. (The Canadian Press/Frank Gunn)

A 2021 report on Canadian women and girls in sport found that one in four  girls who had participated at least once a week in sport before COVID-19 had not returned when restrictions were lifted. One of several reasons cited was “lack of confidence.”

All good coaches know that girls and boys achieve athletic confidence differently. Boys, innately competitive, strive for higher performance in order to be accepted by peers. With girls, acceptance by peers is what gives the confidence to strive for greater performance. As the report also mentions, girls consider sports one of many “interests.” It can take time and encouragement before they commit to the long haul of serious athletic competition.

Thus, nothing could be more calculated to erode confidence in girls’ interest in athletic competition than the obsession among sport academics and sport associations with the privileging of “inclusion” in women’s sport of males who identify as female over principles of fairness and safety.

In March, high-performance Canadian coach Linda Blade was in Atlanta, Georgia, to witness swimmer Lia Thomas—a male who identifies as female—win a National Collegiate Athletic Association women’s title in the 500m freestyle swim. As Blade was well placed to observe, none of the onsite media, captivated by the “inclusion” narrative, were interested in exploring the effect on women of being forced to compete against the powerful Thomas, whose times made a mockery of even the most elite women’s performance capacity. They did not see, as Blade did, several women swimmers crying in the hallway.

Blade is also the president of Athletics Alberta, whose sport policy adheres to biological reality and the primacy of fairness and safety. She sits on a “gender committee” with her peers from the other nine provinces, all with voting rights in the formation of Athletics Canada (AC) policy. Until 2018, transgender athletes were required to show proof of two years’ hormone treatment and opposite-sex social presentation for cross-division eligibility. Now, Blade’s colleagues are proposing that a simple declaration of female self-identification and testosterone suppression should suffice for entry into the women’s division.

If approved, AC would be putting its official stamp on the permissive 2016 guidelines recommended by the Canadian Centre for Ethics in Sport (CCES), which virtually all sporting associations in Canada now follow. The CCES guidelines are so lax they permit a male to self-identify into women’s sport one season and back into men’s sport the next, or self-identify into one sport as female and another sport as male. Blade is the only provincial member of AC who objects to the proposal. Her vigorous critiques of the policy during discussions have slowed but, alas, not halted its progress.

Athletics Canada will convene in Halifax for three days in mid-May, where the proposal is expected to be adopted as its policy for domestic competitions. There will be meetings before the final vote to ensure it is unanimous, as, according to Blade, AC does not want any “no” votes on the record. Blade hopes that her own stick in the wheel of consensus may succeed in delaying the vote. Time, she believes, is a friend to women’s sex-based rights on this issue because, to the alert observer, the ice of trans dogma is finally starting to thaw under the sunny rays of objective scrutiny. The green shoots of a rational spring are cropping up here and abroad.

In December, for example, the Ottawa-based Macdonald-Laurier Institute published a boldly definitive report titled “Fair Game: Biology, fairness and transgender athletes in women’s sport.” Unlike the group that conceived the CCES guidelines, which did not include a biologist, a female athlete, or a coach, the MLI authors were highly credentialled, disinterested academics whose published writings cover the gamut of relevant scientific and ethical factors. Irrefutable evidence was adduced to prove that testosterone suppression does little to offset the enormous post-puberty male advantage elite male athletes bring to women’s sport. The report found that there is no scenario in which fairness and safety for women can be guaranteed to harmonize with inclusion for trans-identifying males.

England, further advanced in the trajectory of the debate, has seen a distinct cooling of ardour for male bodies occupying women’s sport. In May 2021, Emily Bridges, formerly Zach Bridges, a 21-year-old male cyclist who now identifies as female, finished 43rd of 45 riders in an elite men’s race. In September, Bridges finished second to last in the Welsh National Road Race Championships, a 12-kilometre lap behind the winner. Little more than a month ago, having begun hormone therapy last year to reduce testosterone levels, Bridges was set to enter a race against women in the British National Omnium Championships, where the athlete was expected to finish among finalists that included five-time Olympic champion Dame Laura Kenny. But the Union Cycliste Internationale (UCI) pronounced Bridges ineligible on technical grounds (the athlete is still registered as a male cyclist).

One of the heartening, but unusual features in this story was that, instead of weeping quietly out of sight, a number of women riders were reportedly considering a boycott of the event. The BBC noted that the UCI can bar Bridges from cycling against women even if the athlete meets eligibility criteria, in order to “protect health and safety” and “guarantee fair and meaningful competition that displays and rewards the fundamental values and meaning of the sport.”

Capping this significant acknowledgement that the inclusion principle cannot be as absolute as the CCES and AC believe is desirable, Prime Minister Boris Johnson publicly stated: “I don’t think biological males should be competing in female sporting events. Maybe that’s a controversial thing to say, but it just seems to me to be sensible.” (He added, “I also happen to think that women should have spaces—whether it’s in hospitals, prison, or changing rooms—which are dedicated to women.”)

If Boris Johnson can publicly say what—to err by understatement—an estimated 90 percent of ordinary Canadians believe on this issue without fear of the earth swallowing him whole, why is it that no Conservative politician will touch this alleged third rail with a 10-foot pole?

Pierre Polievre, front-runner for leadership of the Canadian Conservative Party, has been greeted by many admirers as—finally!—a true, courageous conservative. But not courageous enough, apparently.

Neither he nor any other politician has voiced the wish to address a momentous cultural change that could within a decade effectively transmogrify women’s competitive sport into Plan B for a phalanx of male-bodied athletes, cursed with middling physical talent, whose lust for sport glory happens miraculously to coincide with an epiphany in which they discover a hitherto dormant feminine soul shyly emerging from slumber to full wokefulness.