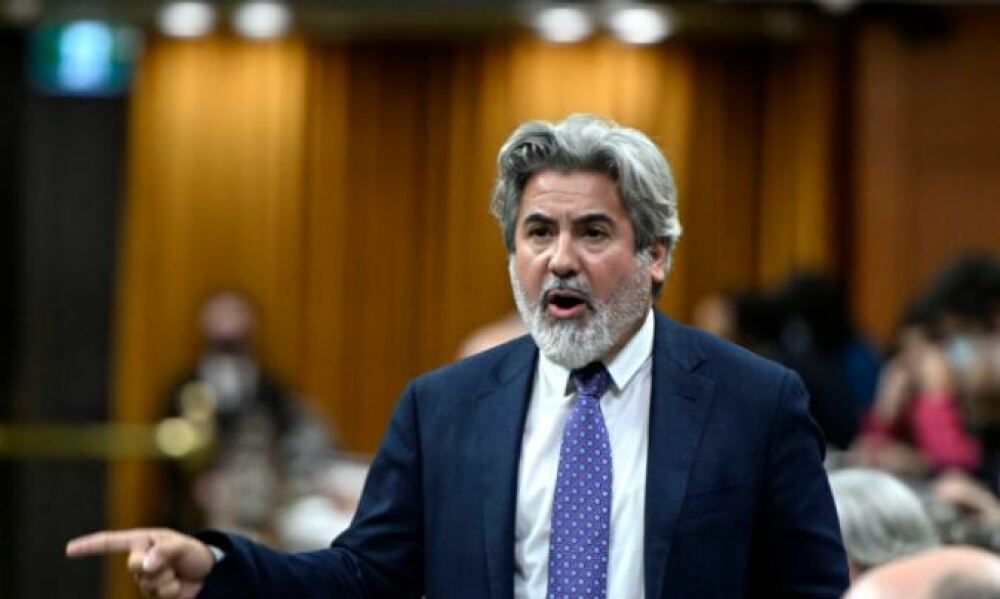 Minister of Canadian Heritage Pablo Rodriguez rises during question period in the House of Commons on Parliament Hill in Ottawa on June 16, 2022. (Justin Tang/The Canadian Press)

Minister Pablo Rodriguez’s Heritage Department is in a mess of its own creation. It just had to suspend an “anti-racism project” for which it had granted over $133,000 last year to the non-profit Community Media Advocacy Centre (CMAC) under the rubric of the department’s “Anti-Racism Action Program.”

One of CMAC’s “senior consultants” is Beirut-based Laith Marouf, a longtime political actor, whose recently exposed hateful Twitter history has gone viral. Marouf, who appears to be Marxist, routinely expresses contempt for the West. Visiting the Vietnam Veterans Memorial, Marouf tweeted that he “wish[ed] it was much bigger with the names of a few million dead corpses of USian dirt baggs (sic).” His selfie at the Lincoln Memorial has Marouf “telling [Lincoln] what I think of his [expletive] colony.” Marouf also abhors the Québécois. In one Twitter string, Marouf writes, originally in French: “French frogs are very tasty roasted, Go back to your franco gutter” and “lol, I think Frogs have much less IQ than 77, and French is an ugly language.”

But Marouf’s disdain for everyone else pales beside his malignant loathing for Jews. Here, disdain turns to sewage. Samples: “Life is too short for shoes without laces, or for entertaining Jewish White Supremacists with anything but a bullet to the head.” He writes that “Jewish White Supremacists” are “loud mouthed bags of human feces.” Marouf falsely blamed the murder of a Muslim London family on Jews. He has excoriated Ukraine’s “pretend-Jewish” president and “Nazi-Zionist alliance.”

CMAC has a particular interest in enhancing the indigenous presence in media. But Marouf has demonstrated in public talks that Canada’s indigenous people are merely tools for legitimizing discourse around his real passion, hatred for “apartheid” Israel.

At the Heritage-sponsored National Summit on Antisemitism, presided over by Irwin Cotler, Canada’s Special Envoy for Preserving Holocaust Remembrance and Combatting Antisemitism (whom Marouf has publicly described as the “Grand Wizard of Zionism in this Colony”), a First Nations woman opened the proceedings with a ritual blessing. Marouf punished her with a vicious tweet, calling her a “whacko Indigenous House-Slave of Apartheid Canada.” This occurred in July 2021, two months after the CRTC awarded $16,815.10 to the CMAC. Of that amount, nearly $13,000 was paid to Marouf and his fellow “consultant” Gretchen King, allegedly experts in combatting hate and racial prejudice, at a rate of $225 per hour each.

Mark Goldberg, an independent telecom analyst and consultant and co-founder of the Canadian Telecom Summit, has followed Marouf’s trajectory closely, sharing his opinions on his blog. He alerted Heritage to the Marouf problem in April, but nothing was done to prevent Marouf’s featured participation in CMAC’s forthcoming anti-racism series of programs across Canada, now in progress. In retaliation, Marouf has done his best to discredit Goldberg with—what else?—accusations on Twitter that he is a Zionist (evil by definition) who “would love it if [Goldberg] had the power to steal Palestinian children from their families and put them in Infanticide Camps like in Apartheid Canada or Apartheid Israel.”

Marouf is all talk now, but he began his activist career with disruptive action. In 2001, Marouf was barred from Concordia University in Montreal for vandalizing university property with anti-Israel slogans and threatening a security guard. In 2003, Marouf drew swastikas on an Israeli flag at a pro-Israel demonstration on Montreal’s Concordia University campus. At a hearing, he testified he had drawn the “the inverted swastika, the Hindu circle of life, not the Nazi swastika.” His student advocate said Marouf’s action had been “a political statement regarding the oppression of the Palestinian people by the Israeli government, not a symbol of hate.” Add cowardice to his rap sheet.

On Aug. 19, Heritage’s Diversity and Inclusion Minister Ahmed Hussen finally denounced as “unacceptable” the behaviour of “this individual,” adding he has asked Canadian Heritage to “look closely at the situation.” But why only now when embarrassed into it by Twitter outrage?

Aside from Goldberg’s warnings, Liberal MP Anthony Housefather raised the issue with Minister Hussen and his staff months ago. Housefather told me in response to a query that he and other colleagues have “persistently” continued to do so. He stated: “[Marouf] was hired as a consultant by an organization which demonstrated extremely poor judgment to say the least. The funding and contract should be halted immediately. … Antisemitism needs to be treated with the same concern as any other type of racism or prejudice.”

Antisemitism at high government levels isn’t responsible for the long silence. Prime Minister Trudeau has unequivocally denounced even the Boycott, Divestment and Sanctions (BDS) movement as a form of antisemitism. But Trudeau and his ministers are all progressives. If the cretinous Marouf had been an antisemite of the kind progressives are comfortable dealing with from a moral high ground—a white neo-nazi—they would have kicked him to the curb with the speed of summer lightning. As an extreme left-winger, he presents a conundrum for progressive politicians.

The Canadian Anti-Hate Network (CAHN), for example, which previously received a $250K grant from Heritage to fight racism for the grant period that ended in March, offers no hint in its name that its policy is only to challenge Jew hatred from the right. In this case, the story was too big to ignore, so they mounted a scrupulously neutral reportage of Marouf’s history on their website. This included Marouf’s lawyer’s statement that his client doesn’t have “any animus toward the Jewish faith as a collective group” and that his tweets clearly refer to “Jewish white supremacists” and not Jewish people in general.

But Marouf’s often-expressed definition of a Jewish white supremacist includes all Israeli Jews plus all Jews who express attachment to their homeland (only antisemites refer to Jews indiscriminately as “Zios” as Marouf does). Yet the CAHN made no judgment about the lawyer’s demonstrably risible “defence,” nor did it respond to my request for a comment, nor did they denounce Marouf on Twitter, as they invariably do at any hint of right-wing antisemitism.

Progressive politicians at Heritage, as well as racism thought leaders on racism and other cultural elites, who resist holding hard-core antisemitism arising from the extreme left to the same standard as they do antisemitism from the extreme right, must grasp the nettle on their moral failure.

Sheer incompetence, although a glaring factor, does not explain the Marouf scandal, and an apology will not bring closure to it. An investigation is in order.