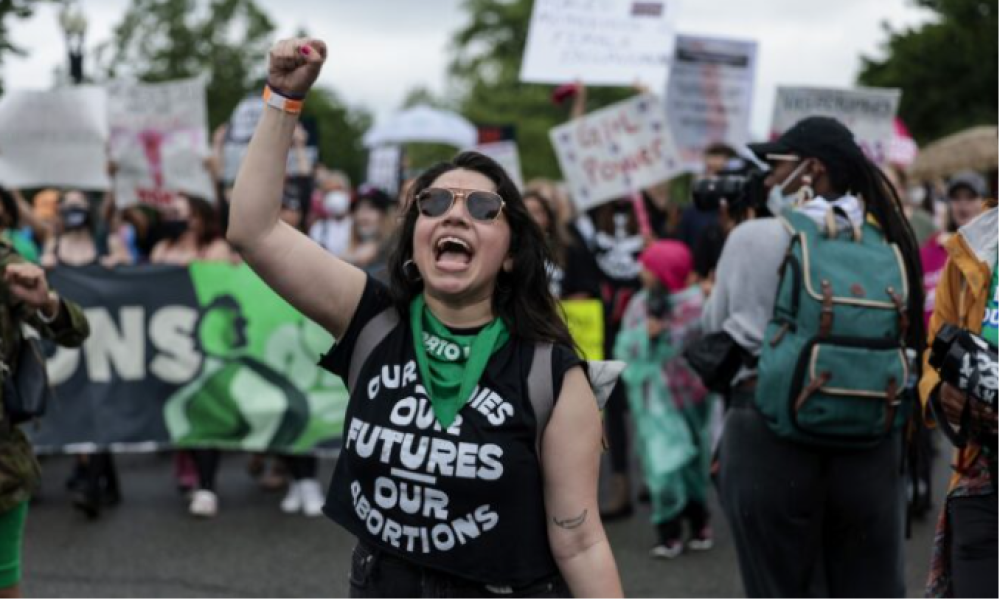 Abortion rights protesters yell as they march along Constitution Avenue during the Bans Off Our Bodies march in Washington on May 14, 2022. (Anna Moneymaker/Getty Images)

In the 1960s, they were called the “days of rage.” They are back, but the rage isn’t contained within a rebellious cadre of American anti-war, anti-establishment students, almost universally at the time labelled “radicals.”

Today, under the banner of anti-racism, human rights, and social justice, rage has become normalized at the highest levels of society. Indeed, anything less than rage in certain circles is considered akin to silence, and therefore—in these same circles—“violence.” Whether or not they approve of the actions group rage generates, politicians, especially on the left, too often feel bound to express solidarity with their flock. Trouble is, they take the impassioned voices on social media as representative of their flock.

Two years ago, simmering rage rolled to a boil with the police killing of George Floyd. Early this month, the presenting incident was the leak of a U.S. Supreme Court draft opinion that, once handed down officially, would vitiate the court’s 1973 Roe v. Wade decision and send abortion regulation back to the states to decide individually. The leak itself was momentous, unprecedented. And so was the response on the left.

The leak is first of all a devastating stain on the Supreme Court as an institution, even if, although clearly an inside job, it’s unclear whether it was executed by a pro-abortion or anti-abortion activist, since there are plausible motives on both sides. But the reaction of progressive leaders is equally disturbing, if not more.

Political leaders seem to be vying to outdo one another for the title of “radical.” Democrat Senate Leader Chuck Schumer got the rage ball rolling when he stood on the Supreme Court steps in March 2020, as the Justices were considering a previous abortion case, and threatened, “I want to tell you, Gorsuch, I want to tell you, Kavanaugh, you have released the whirlwind and you will pay the price. You won’t know what hit you if you go forward with these awful decisions.” The purposefully demeaning manner of his address appears in retrospect as a dog whistle to pro-abortion activists. He seemed to be saying, these judges have forfeited their right to this nation’s respect. They are nobodies. Have at them.

But in slighting the justices, Schumer was also giving the back of his hand to the United States Constitution and implying that the legitimacy of the Supreme Court is entirely dependent on the popularity of its decisions. Other politicians followed his lead. Lori Lightfoot, mayor of Chicago, America’s most violent city, put out a “call to arms” on Twitter for those in the LGBTQ community, warning “the Supreme Court is coming for us next.” By “us,” she presumably meant blacks. As one responder drily noted, “Arms? You might want to find a better metaphor.”

Protesting outside the Supreme Court building would have been fine. Going to justices’ homes is not. In a stunningly irresponsible move, a pro-abortion group, Ruth Sent Us, posted a map with the street names where Amy Coney Barrett, John Roberts, Samuel Alito, Brett Kavanaugh, Clarence Thomas, and Neil Gorsuch each live. Google removed it.

A dismayed Daniel Henninger of the Wall Street Journal observed, “The Supreme Court of the United States—from its first meeting in February 1790 through the Civil War, two world wars and the battle for civil rights—has never been protected by an 8-foot wire fence. It is now. On Monday the Senate voted unanimously to extend police protection to the justices’ immediate family. What has happened to us?”

You might think from the level of fury one sees in real and social media that the majority of Americans are as obsessed with unfettered, convenient, funded abortion as the abortion activists and progressive Democrats are. That isn’t the case by a long shot.

According to a media release reporting key findings from a Republican National Committee poll conducted in February, abortion is a primary issue for only 9 percent of voters overall. For party-bound voters, when asked how the draft-leak news would influence their vote in the fall midterm elections, 49 percent of Democrats said they’d be more likely to vote, but so did 48 percent of Republicans, “a statistical tie between the two parties.” So this leak is unlikely to be the golden political goose the Dems are hoping for to boost the sagging support their own stubbornly leftward trend has caused.

The Dems assume that Roe v. Wade was a decision at least all Democrats were solidly behind, and that its reversal would be perceived as an absolute calamity across the board. But the poll revealed that even among Democrats, the 1973 U.S. Supreme Court ruling decriminalizing the direct killing of preborn girls and boys in the womb for any reason up until the moment of birth never sat comfortably.

In spite of the crisis surrounding this leak, there is reason to believe the bursting of a long-suppurating national abscess, which was clearly never going to heal, will be worthwhile in the end. The late, venerated Justice Ruth Bader Ginsburg, a staunch feminist, admitted in 1985 that, because of its faulty reasoning, Roe had “provoked, not resolved, conflict.” And in his comprehensive, best-selling 2021 history of the real-life protagonist of Roe v. Wade, “The Family Roe,” writer Josh Prager noted the decision’s singularity. Other liberalizing high court decisions, such as school desegregation, elimination of obstacles to interracial marriage, and legalization of gay marriage, were afterward accepted as norms with solid support across party lines, he wrote. Not Roe: “Opposition to Roe became more hostile after its issuance.”

For the sake of Supreme Court independence, and all that it implies for national stability, Americans should hope the justices hold their ground. In a democracy, from time to time, oxen are gored on both the left and the right. This time it’s progressive oxen. Too bad for them, but in a civilized country, elites should not respond to disappointment with threats, tantrums, and intimidation.