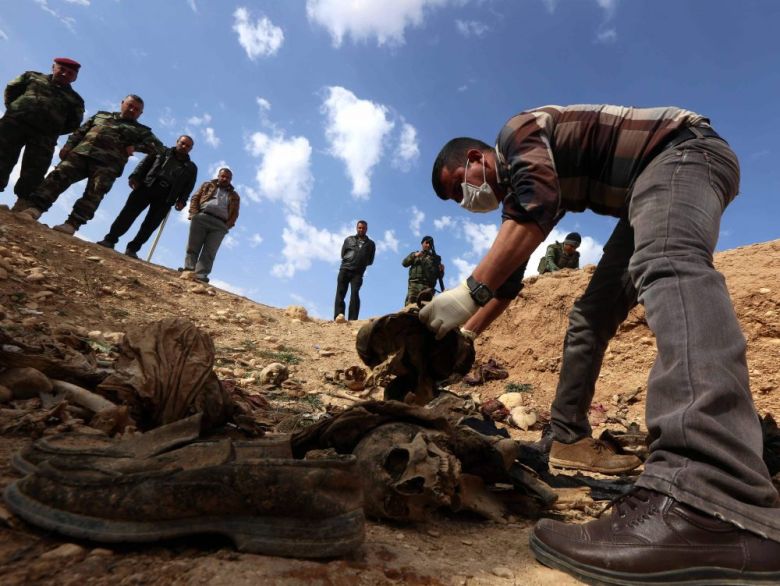 In this file photo taken on Feb. 03, 2015, members of the Yezidi minority search for clues that might lead them to missing relatives in the remains of people killed by ISIL. The image was taken a day after Kurdish forces discovered a mass grave near the Iraqi village of Sinuni, in the northwestern Sinjar area.Safin Hamed/AFP/Getty Images

Five years after slaughter, Yezidis here have received minimal government help. Whatever success they are finding is mainly attributable to heroic Canadian volunteers

A sombre anniversary approaches. On Aug. 3, 2014, ISIL jihadists invaded the ancient city of Sinjar, the heartland of the Yezidi people. They forcibly converted, shot, beheaded or burned alive 10,000 men and boys, taking 7,000 women and girls captive, to be used as sex slaves. Holy sites were desecrated. The Kurdish forces that had pledged to defend them retreated en masse in the face of the onslaught. Those who managed to flee — approximately 15,000 Yezidi refugees, mostly women and children — ended up in UNHCR camps in Turkey.

After officially declaring the mass murder of the Yezidis a genocide, the Trudeau government agreed to settle some 1,200 Yezidi refugees here. Most incoming Yezidis are women, alone or with children, traumatized by their ordeal, and separated from kinsmen languishing in Iraq and Syria camps; they should be fast-tracked for passage here, but aren’t a government priority.

Settlement has been fraught with difficulty for these fragile people. Many of them speak a unique dialect, Kurmanji, understood by a scant handful of interpreters in Canada. Illiterate, they struggle with English, so even shopping in supermarkets is a trial. Banking is a mystery to them.

Settlement has been fraught with difficulty for these fragile people

Consumed by past horrors, many cannot even grasp that they are safe here. (Their fears are not entirely unfounded: one former sex slave in London, Ont., I interviewed saw her ISIL owner on a bus; she reported him with both his real and ISIL name, but to my knowledge London Police Services have not yet found him.)

Yezidis here would be floundering if they had only the government’s minimal help to rely on. Whatever integration success they are finding is mainly attributable to heroic volunteerism by generous Canadians. There are several groups active on this front, and I am not slighting the work of any when I single out Project Abraham as my focus today.

For it is Project Abraham, in conjunction with the Yezidi Human Rights Organization, founded and led by Mirza Ismail, the Yezidis’ spiritual leader, who have taken responsibility for organizing a Mount Sinjar genocide’s fifth anniversary memorial gathering, to take place Sunday Aug. 4 at 2 p.m. in Toronto on the south lawn of Queen’s Park, at Ontario’s Legislature. The keynote speaker will be Irwin Cotler, former minister of justice, now chair of the Raoul Wallenberg Centre for Human Rights.
Displaced Iraqis from the Yezidi community cross the Syria-Iraq border along the Fishkhabur bridge over the Tigris River in northern Iraq on Aug. 13, 2014. AHMAD AL-RUBAYE/AFP/Getty Images

Project Abraham’s mandate is illuminated in the following case study.

Z, a survivor of sexual slavery, arrived in Toronto with three pre-school daughters in the summer of 2017. It took about six months for child benefits to kick in. The government allotted her $1,400 monthly to cover rent, utilities, clothes and food. But rent alone in a ramshackle Richmond Hill, Ont., basement (slated for demolition) cost $1,400.

A team of Project Abraham volunteers, later joined by a few more from Jewish Immigrant Aid Services, stepped in. They amassed all necessary household items, from kitchenware to linens, and $6,000 to tide Z over for the family’s first six months. She needed it when the government cut her off from child benefits, which occurred because — not knowing if her husband was alive or dead — Z had not self-described as “widow” on her refugee application form. Nor of course did she have a death certificate. The government is, preposterously, insisting Z, and others in the same boat, report the international income their husbands are earning.

H, the volunteer attached to Z, dealt with Z’s landlord (H eventually found her a brighter basement flat for $1,200 a month, but had to write a year’s worth of cheques on Z’s behalf to secure it), supervised utilities installation and monitored official mail. At first, Z’s children were needy and clinging, needing constant holding. There was evidence of sexually inappropriate play amongst them (the children were with Z during her sex slavery). This period was exhausting for volunteers.

Dental care was an issue. Her girls are covered under the Healthy Smiles program, but adults aren’t. Project Abraham found a generous dentist, who did extensive work for her pro bono. Z suffers frequent periods of anxiety-related physical pain. A few months ago, she received word her sister-in-law and nephew had been killed in Iraq by a bomb, after which she tumbled into catatonic blackouts. During this period, Project Abraham volunteers took responsibility for her children.

Z has recovered, and her children, now fluent in English, are doing well at school. Z is more relaxed as a parent, so volunteers need to spend much less time with her. Z may be judged a success story.

Yezidis from the GTA and London will be bussed to the Queen’s Park memorial this Sunday. It would gladden their hearts to see a friendly and supportive crowd of Canadian well-wishers, hopefully some who would consider furthering the work of Project Abraham via donations and volunteerism. I will be there.