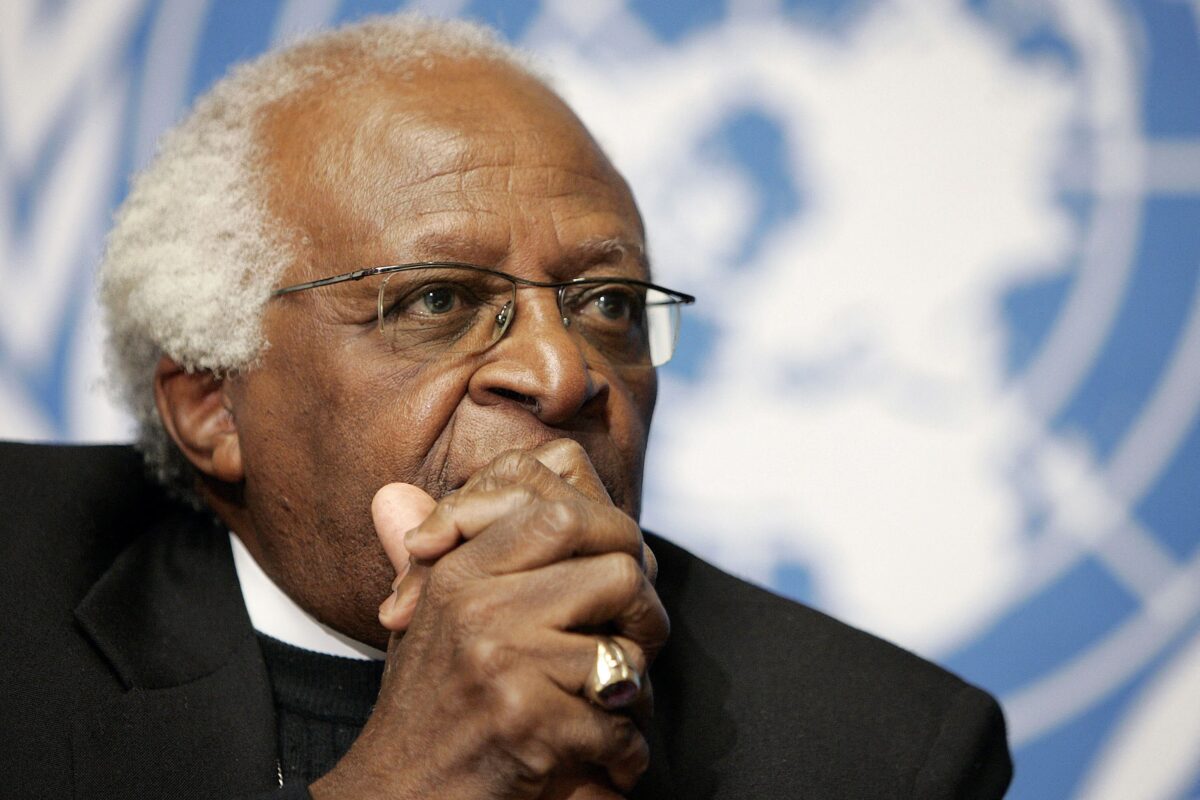 Anglican archbishop Desmond Tutu, winner of the 1984 Nobel Peace prize and a central figure in South Africa’s anti-apartheid movement, died at age 90 on Dec. 26. As befitted his historical stature, the New York Times accorded generous wordage to his obituary.

Archbishop Tutu’s calls for economic sanctions were instrumental in amassing the international pressure that forced an end to an odious system of institutionalized racism. Among his many outstanding accomplishments, Tutu served as chairman of the Truth and Reconciliation Commission, using his influential position to urge what he called “the principle of restorative—rather than retributive—justice.” He stood firmly against violence and urged blacks and whites to bridge the chasm between them. He spoke his often-discomfiting truths to black leaders, as well as white. As the Times put it, he was a “spellbinding” preacher, his sermons laced with his hallmark wit and humour, ever upbeat, showcasing his “winning effervescence,” while “inviting his audience into a jubilant bond of fellowship.”

More! Tutu was a committed husband and father. He was modest, punctual, appreciative of bellhops, uncomfortable with limousines. He illustrated children’s books. In spite of his sufferings, “he did not allow himself to hate his enemies.” Indeed, he was “generous in forgiving his enemies.”

My goodness, was there ever such a paragon of ethical and moral leadership?

Well, not quite. Nobody is completely flawless, and Archbishop Tutu’s otherwise pristine copybook does display one rather unattractive stain. But you would look in vain for it in the fulsome New York Times obituary. So we turn now to Alan Dershowitz’s obituary, published by the Gatestone Institute. Dershowitz acknowledges that Tutu is a symbol of reconciliation, but he was also an unregenerate antisemite. He did not even trouble to veil his antisemitism as mere anti-Zionism.

Tutu made his distaste for Jews clear in his discourse, with the use of classic antisemitic tropes like Jewish “arrogance,” “power,” and “money.” Tutu minimized the suffering of Holocaust victims, asserting that “the gas chambers” made for “a neater death” than apartheid did. He complained about the “Jewish Monopoly of the Holocaust,” demanding that its victims “forgive the Nazis for the Holocaust,” even though he himself did not forgive the Jews for “persecuting others.”

“He not only believed in antisemitism, he actively promoted and legitimated Jew-hatred among his many followers and admirers around the world,” Dershowitz writes.

Tutu likened Zionism to racism, recalling the infamous 1975 United Nations “Zionism is Racism” resolution, which was passed, but eventually revoked. He accused Israeli Jews of doing “things that even Apartheid South Africa had not done.” He compared Israel to Hitler’s Germany, as well as to the Soviet Union, predicting Israel would “bit[e] the dust,” as the two other evil regimes did. He demanded boycotts of Jewish academics in Israel, but not Muslim or Christian Israelis. Such a distinction speaks to Jew hatred, not anti-Zionism. But when accused of antisemitism, Dershowitz reports, Tutu would often flippantly respond, “Tough luck,” or “My dentist’s name is Dr. Cohen.”

NYT did allude to the fact that Tutu once urged the Cape Town Opera to refuse to perform the (Jewish) George Gershwin’s opera “Porgy and Bess” in Tel Aviv, but not as an example of antisemitism. Here is how they put it: “In 2010 [Archbishop Tutu] unsuccessfully urged a touring Cape Town opera company not to perform in Israel, invoking South Africa’s struggle against apartheid in criticizing Israel’s policy toward Palestinians. He said that the company’s production of ‘Porgy and Bess’ should be postponed ‘until both Israeli and Palestinian opera lovers of the region have equal opportunity and unfettered access to attend performances.’” Note the word “criticizing” which hardly characterizes Tutu’s abuses of the Jewish state. They make it out to be a perfectly normal position to link Palestinian Authority residents’ “access” to Tel Aviv operas to South Africa’s apartheid regime, even though Israeli Arabs had free access to the performance.

Here is Dershowitz’s treatment of the same incident: “[Tutu] urged the Cape Town Opera to refuse to perform George Gershwin’s Porgy and Bess in Tel Aviv and called for a total cultural boycott of Jewish Israel (my emphasis), while encouraging performers to visit the most repressive regimes in the world.” The call for a boycott of Jewish Israelis is a critical feature of the story that NYT skipped. A call for a boycott is a call for deligitimation. It is one of the tactics that brought down South Africa’s apartheid regime.

All of Tutu’s accusations against Jews and Israel were demonstrably baseless canards, but “ordinary” antisemites believe them, because it gives them comfort to think their inchoate hatred is justified.

It is tiresome to be forced to adduce “evidence” that Israel is not an apartheid state, but here is a case where needs must. Arab Israelis enjoy full citizenship in Israeli society. There are Arab justices on the Supreme Court, and Arab political parties (an Arab Israeli now sits in the cabinet). About 20 percent of doctors in Israel and about half of pharmacists are Arab, in positive disproportion to their numbers. They treat everyone, whether Jewish, Muslim, or Druze. The list could go on and on.

Such facts make a mockery of the very word “apartheid” in the mouth of a survivor, let alone a hero of apartheid’s demolition. Yet Archbishop Tutu had no qualms about weaponizing the word for hateful purpose. He knew very well that Israel is the only democracy in the Middle East, that the Israeli government is not guilty of “censorship of their media,” as he claimed (quite the contrary, but the Palestinian media are censored), and that Muslim Israelis enjoy equality rights that Christians in Muslim countries can only dream of. So it is especially shameful—a disgrace to the anti-apartheid movement—that Tutu would use his celebrity and lend his pulpit to bruit the kind of hateful messaging that one associates here with the white-supremacist dregs of society.

Dershowitz concludes by asking, “at a time of increasing antisemitism in the world,” that any decision on canonization of Archbishop Tutu—statues or other forms of homage—take his “decidedly mixed legacy” into consideration.

This is naturally for South Africans to decide.

For people who are not antisemites, the ancient question remains unanswered.